What’s in the new Iran deal, and what’s holding it up? 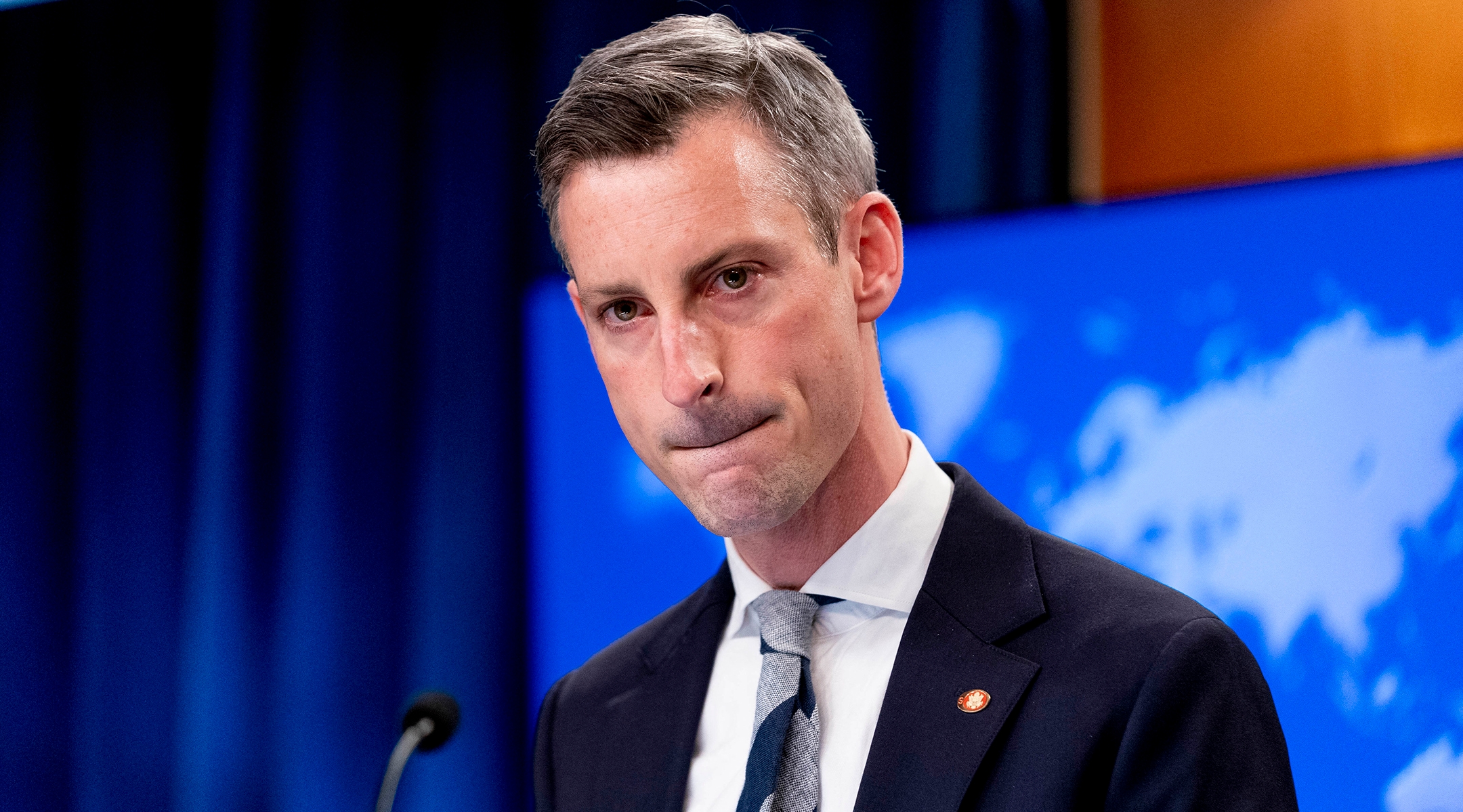 State Department spokesman Ned Price takes a question from a reporter during a news conference at the State Department in Washington, Feb. 28, 2022. (Andrew Harnik/Pool/AFP via Getty Images)
Advertisement

(JTA) — Last week, the chances that the United States would rejoin the Iran nuclear deal seemed higher than they had been in years.

CNN and Reuters reported that Iran had dropped multiple demands in the ongoing negotiations over a new accord that would update the original reached in 2015. Senior U.S. officials were confident that the new deal would be sealed in days.

Then on Monday, Iran’s government said it wanted more time — extending into September — to examine the U.S. response to a recent proposal. It’s no longer clear if Iran has made the concessions that U.S. officials were so sure about, and the light that international diplomats thought they were seeing at the end of the tunnel is beginning to dim — again.

How did we get to this stalemate? And what will it mean if the United States rejoins the pact, or chooses not to? Let’s dive in.

What was in the original Iran deal?

The Joint Comprehensive Plan for Action, as it’s officially named, came about under the Obama administration and traded sanctions relief for rollbacks in Iran’s nuclear program. President Obama and many Democrats argued that it was the best method for diplomatically putting a stop to Iran’s advancing ambitions of obtaining nuclear weapons. Israel has reviled the deal since the start, arguing that Iran — which routinely calls for Israel’s violent destruction — is not to be trusted. Several Jewish lawmakers agonized over whether or not to support their president and the deal, which became a signature foreign policy achievement, or to heed the condemnation from Israel and many Jews in their local communities.

In signing the JCPOA, Iran agreed to reduce its stockpile to a small amount of uranium enriched to 3.67% — a level needed for medical research, unusable for weaponization — and to effectively end the production of plutonium. It also agreed to allow regular inspections of its nuclear facilities. The other parties in the deal — including Russia, China, Britain, Germany and France, joined by major trade partners like India and South Korea — agreed to end sanctions targeting Iran’s nuclear program (which Iran continues to insist is for non-military purposes) and its banking and oil sectors.

The deal’s critics decried what they said were fatal flaws: The limitations on Iran’s enrichment program had expiration dates, and several concerns were left out of the agreement, including Iran’s missile program, its disruptive actions in the Middle East and its backing of terrorists worldwide.

Why isn’t the United States currently signed onto the pact?

Republicans also loathed the deal, but for the first year of his presidency, Donald Trump heeded advice of top advisers who said pulling out of the deal would be worse than remaining in it to police Iran. Then, starting in May 2018, he opted for a program of maximum pressure on Iran, leaving the deal, reinstating the suspended sanctions and adding many more new ones. In 2020, he ordered the killing of one of Iran’s top military officials, Qassem Soleimani.

In retaliation, Iran started increasing its enrichment of fissile material to unprecedented levels. It is now believed to be just weeks away from having enough enriched uranium to manufacture a nuclear weapon, as opposed to a year away, which was the case when all sides were abiding by the deal.

While campaigning for the presidency, Joe Biden pledged to seek reentry into the deal, saying that pulling out had allowed Iran to get closer than ever to obtaining a nuclear weapon. He said he wanted to enhance the deal and to negotiate limitations on Iran’s other disruptive actions, but he made clear that his priority was first to get back into the deal.

“If Iran returns to strict compliance with the nuclear deal, the United States would rejoin the agreement as a starting point for follow-on negotiations,” he said in a September 2020 op-ed on CNN. “With our allies, we will work to strengthen and extend the nuclear deal’s provisions, while also addressing other issues of concern.”

One of Antony Blinken’s first acts as Biden’s new secretary of state in February 2021 was to join the JCPOA’s three European partners in telling Iran that the United States was ready to come back to the negotiating table. “If Iran comes back into strict compliance with its commitments under the JCPOA, the United States will do the same and is prepared to engage in discussions with Iran toward that end,” Blinken said. 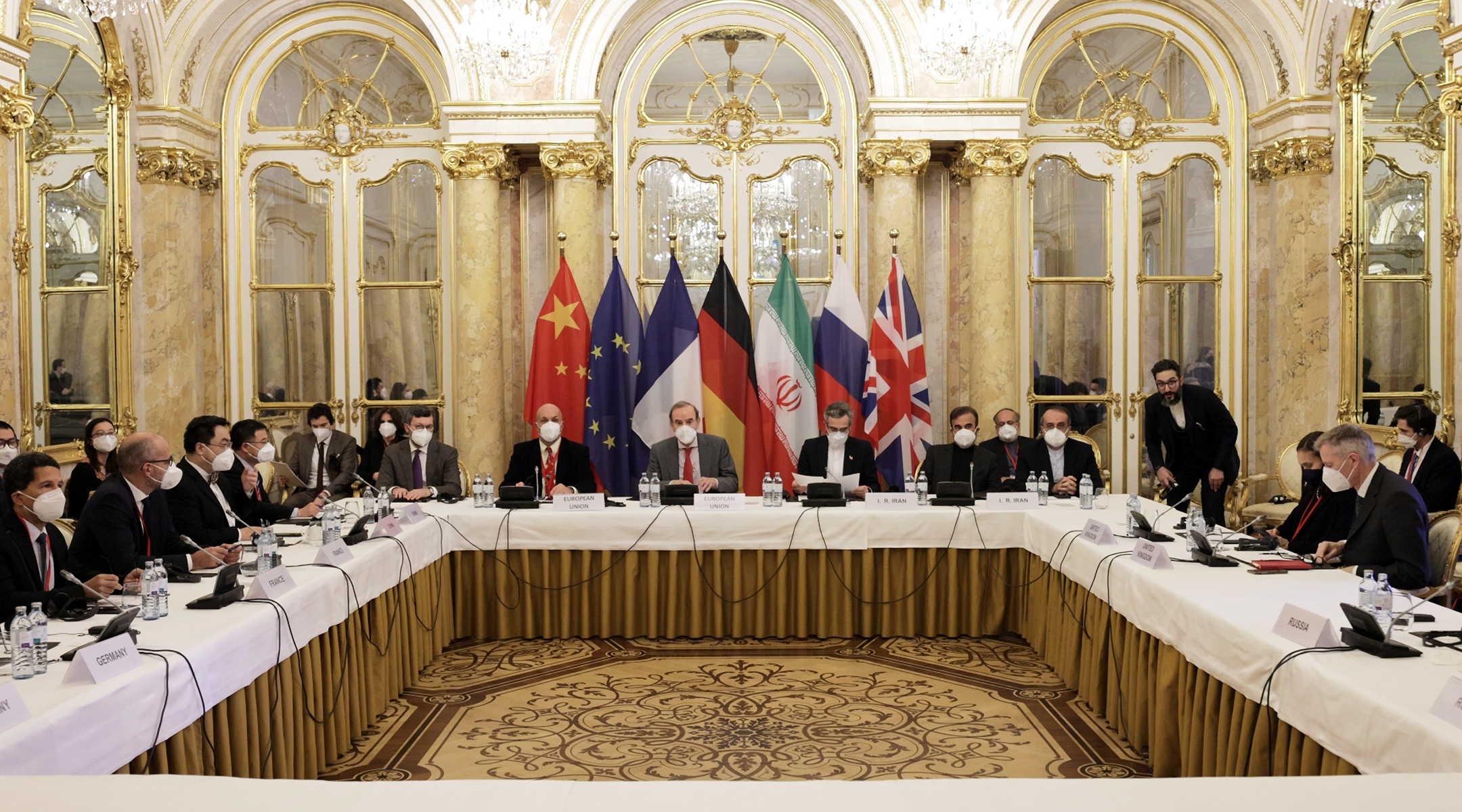 The Joint Comprehensive Plan of Action (JCPOA) Joint Commission in meets in Vienna, Dec. 17, 2021. (EU Delegation in Vienna/Handout via Xinhua)

What’s in the latest version of the deal?

According to reports, Iran will allow inspectors in to verify that it is returning to the original 2015 restrictions — an involved process that could take months, as inspectors observe the dismantling of enrichment systems that have been enhanced to greater levels than before 2015. The United States will likely remove sanctions targeting Iran’s nuclear sector, its oil exports and its banks.

The deal will be less effective, insiders say, because Iran has advanced its enrichment capability to the point that even with a deal in place, it is likely to never be more than six months away from a bomb, half the period under the old deal. Additionally, the “sunsets” — the expirations of enrichment limitations due in 2026 and 2031 — loom closer now.

Getting back into the deal will open Iran’s oil exports to legitimate markets; the Foundation for Defense of Democracies, a think tank leading Iran criticism in Washington, estimates the income will reach $1 trillion by 2030.

If Biden wants back in — what’s holding it up?

Representatives from all of the countries party to the deal, plus the United States (and the European Union, which has participated as a bloc in negotiations but is not signed on as a bloc), have been negotiating a U.S. reentry and new terms since April 2021.

While President Obama negotiated a deal with officials who were seen as relative moderates for Iran, the country elected a hard-line president, Ebrahim Raisi, shortly after Biden took office. Raisi was involved in crimes against humanity in the late 1980s and chose for his Cabinet two men implicated in the 1994 bombing of the AMIA Jewish center in Buenos Aires that killed 85 people.

Whereas Obama’s secretary of state, John Kerry, was famously photographed sharing jokes with his Iranian counterpart, Javad Zarif, Iranian officials now refuse to even be in the same room with American ones, which has resulted in intermediaries shuttling between conference rooms in the Palais Coburg hotel and slowed down the process considerably.

More importantly, Iran has asked for three concessions Biden has refused to agree to. One is that Biden removes what Iran considers to be the most noxious of Trump’s new sanctions: placing the Islamic Revolutionary Guards Corps on the U.S.-designated terrorist list. Biden, who is close to families who have lost soldiers to IRGC-backed attacks in Iraq, has been adamant in refusing. Israeli officials, including Defense Minister Benny Gantz, a national security adviser and the head of Mossad have been in Washington in recent days, making their case against some of the rumored concessions, particularly the delisting of the IRGC.

Iran also wants the International Atomic Energy Agency, or IAEA, to end an investigation into undeclared nuclear material that its inspectors uncovered in 2019. And Iran additionally wants a guarantee that future administrations will not renege on the deal, as Trump did. Western negotiators have claimed that Iran appears to have given up on the first two demands in recent weeks.

But the American negotiators have said they cannot guarantee Iran that a future president would not walk out of the deal.

What are U.S. lawmakers saying this time?

There is one thing all parties agree on: The deal will be less effective this time around.

Supporters of reentry say that some of the harm caused by Trump’s withdrawal is irreparable, while deal opponents say the flaws were built into the original deal.

Sen. Chris Murphy, a Connecticut Democrat who has been outspoken in backing reentry, acknowledged in a Time magazine op-ed in February that any renewed deal would fall short of the restrictions achieved under Obama.

“This new deal may not look the same as Obama’s deal due to all the ground we lost during Trump’s presidency,” Murphy wrote. “But an agreement by Iran to significantly expand its breakout time and allow all the inspections to resume would make the world a safer place.”

A top Democratic congressional staffer who is regularly briefed on the administration’s Iran planning recalled former Israeli Prime Minister Benjamin Netanyahu’s appearance in 2012 at the United Nations’ General Assembly meeting. Netanyahu was mocked for bringing a poster with the image of a cartoon bomb on it, meant to represent Iran’s nuclear program.

“Bibi’s little bomb cartoon is actually a reality,” said the staffer, who asked for anonymity to speak candidly. “Like literally, it was a joke back then. But because of Bibi and Trump’s policies, that f—ing cartoon is real. You’re literally presented with almost a binary choice, which is accept an imperfect deal that will set them back now, or do nothing and go down the line to war.”

“They have more stuff installed,” the staffer added. “They have less oversight. They’ve got a bigger stockpile of 60% enriched uranium than they had during the JCPOA or before the JCPOA even.”

What are some other wild cards getting in the way?

Congress has the right to review the deal, but likely lacks the veto-proof majority to kill it — the same scenario as in 2015, when Obama stymied Congress’ vote against the deal. JCPOA opponents, including in the pro-Israel community, are planning a full court press against it this time around as well, and if Republicans retake at least one of the chambers of Congress in November, they could slow the implementation of the deal.

But there are also international trends that could prompt cold American feet.

Iran reportedly is assisting Russia in its war against Ukraine by supplying it with weaponized drones and teaching it how to evade U.S. sanctions. Biden’s foreign policy priority is crippling Russia, and bringing Iran back into the international community could hinder that aim.

Another setback could come in the form of open conflict between Iran and U.S. allies. Anti-Iranian tensions have exploded into violence in Iraq, and Israel earlier this month faced down an Iran ally, Palestinian Islamic Jihad, in the Gaza Strip.

Iran also has not stopped its malign activity, including reportedly in the United States, where a dissident has faced assassination attempts and an assailant stabbed author Salman Rushdie, who remains subject to a death sentence Iran imposed in 1989.