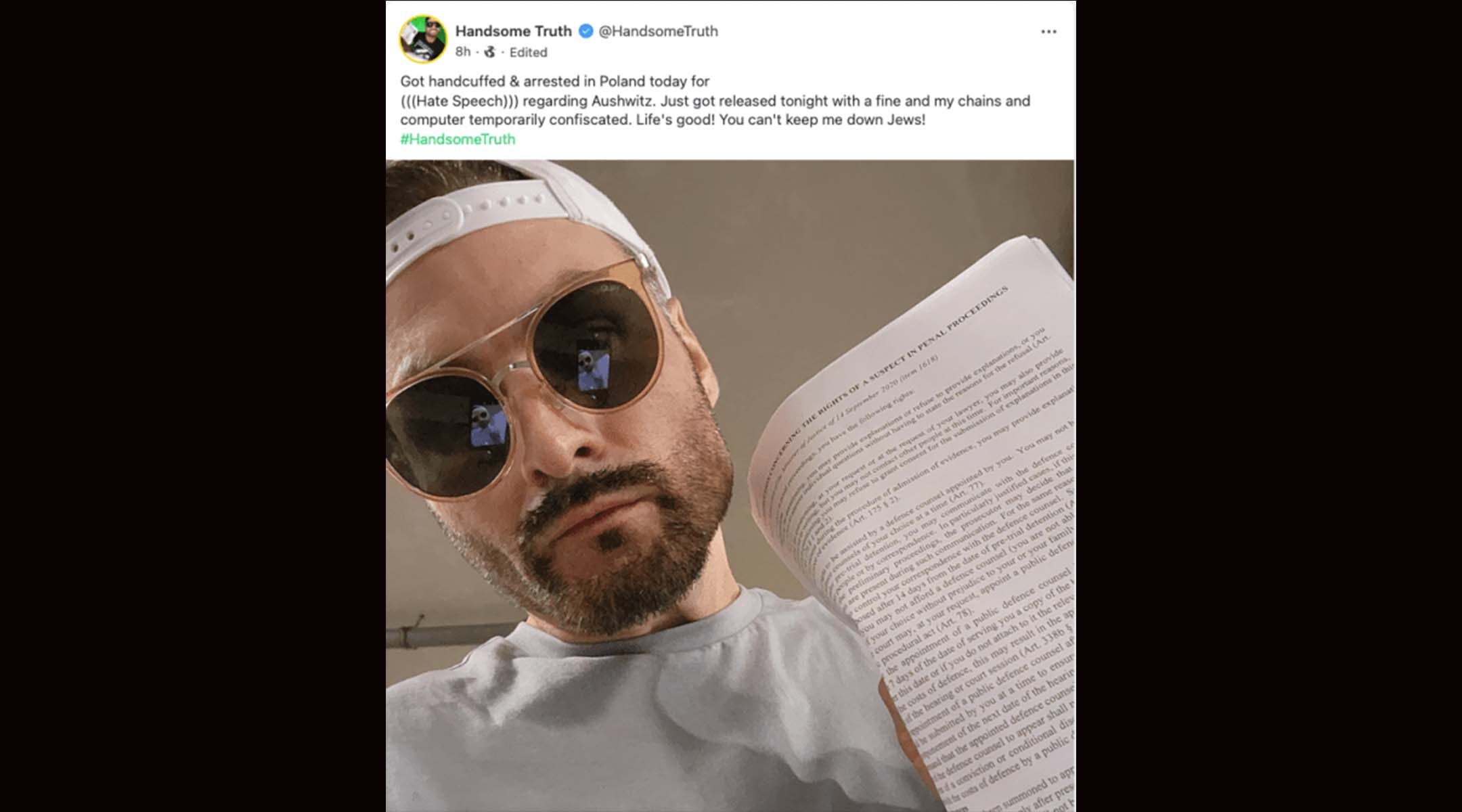 Minadeo announced he had been arrested by Polish authorities in a Sept. 4 post on Gab. (Screenshot)
Advertisement

(J. Jewish News of Northern California via JTA) — The founder of the American extremist group Goyim Defense League says he was arrested in Poland this week after demonstrating in front of the Auschwitz-Birkenau former extermination and concentration camp.

Jon Minadeo Jr. posted about his arrest on Gab, the social media platform favored by right-wing extremists barred from other platforms, on Sunday. He said he had been charged with “(((Hate Speech))) regarding Aushwitz,” using a parenthetical notation adopted by neo-Nazis to identify Jews online and misspelling the Nazi concentration camp in which more than 1 million people were murdered during the Holocaust.

The Polish national police did not immediately respond to a request for comment. But the Polish penal code includes penalties for anyone who “propagates a fascist or another totalitarian state or calls for hatred against national, ethnic, racial or religious differences.”

Minadeo had posted pictures of himself and a fellow Goyim Defense League member, Robert Wilson, holding posters outside Auschwitz’s notorious front gate. The posters contained lewd and derogatory messages about the Anti-Defamation League, the Jewish civil rights group that is a frequent Goyim Defense League target.

“We must continue exposing the Jewish anti white propaganda! That for decades has conditioned our people to be slaves for the Jews,” Minadeo wrote on Gab when posting the photographs. His post attacked the ADL as “an anti white terrorist organization” and says the Holocaust is “a f—ing hoax.”

The post garnered more than 850 “likes” and enthusiastic expressions of encouragement. Some also left words of warning: “Hope you left already, in Europe they can arrest you for s— you said in America,” one user wrote.

If Minadeo was indeed arrested for his demonstration at Auschwitz, it would likely be the first time that the antisemitic influencer has publicly faced legal repercussions for spreading antisemitic propaganda. Unlike the United States, Poland criminalizes certain forms of hate speech, and the country’s laws reference Nazism and fascism specifically.

Minadeo is part of a crop of provocateurs combining white supremacist and neo-Nazi beliefs with online trolling who have significant followings. He hosts near-daily livestreams for 4,200 followers on his website Goyim TV; periodically engages in what he calls “activism,” hanging antisemitic banners on highway overpasses that blame Jews for fomenting a “race war,” for example; and orchestrates a nationwide flyer campaign. Antisemitic flyers distributed by Goyim Defense League members — often in plastic baggies, weighted down with rice or pebbles — have been reported in dozens of locations across the United States.

The Goyim Defense League first gained national attention in 2018 after successfully duping NFL quarterback Brett Favre into recording an antisemitic video on Cameo; the Hall of Famer later apologized. Last year, the group was responsible for at least 74 propaganda incidents in the United States, according to the ADL.

The incident at Auschwitz was not the only one where Minadeo boasted about his provocations during his travels. He documented his vacation to Poland in a number of other photos and videos — including one in which he verbally attacks a South Asian man for more than 4 minutes.

The video, which went viral on Reddit, bore the headline “American tourist in Poland goes on racial tirade against Indian guy.” It shows Minadeo, who espouses the “Great Replacement” theory — that Jews are orchestrating mass migration to European countries to dilute white populations — harassing the man on a sidewalk. He calls the man an “invader” and tells him to go back to India. “Why are you in Poland? Why are you here?” Minadeo says while following him. “You have your own country.”

A different video posted on Gab shows Minadeo sitting on a restaurant patio. He is wearing a “white pride” T-shirt and a long, gold-colored swastika necklace, when a tall man in a tartan blazer approaches him and tells him it is illegal to display a swastika in Poland.

The man turns and walks away. Minadeo follows him inside the restaurant, recording him.

“Who makes it illegal?” Minadeo asks. “The Polish government,” the man replies. “No, the Jewish government,” Mindeo responds. He calls the man a “cuck,” a term used by right-wing internet users to describe weak men, and a “f—ing pussy” before asking if he would like to “go outside” to fight.

In the subsequent picture that Minadeo posted after he said he had been arrested, his swastika necklace was gone. He said he had been handcuffed and fined before being released, but with his computer confiscated — temporarily, he said.

A version of this article originally appeared in J. The Jewish News of Northern California.