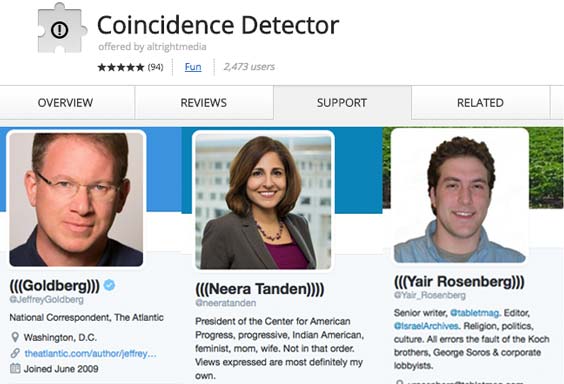 Perhaps you’ve noticed something strange sprout up on social media lately: a set of parentheses surrounding all things (((Jewish))), including the names of Jews themselves. Dubbed the echo, this designation emerged in 2014 from The Daily Shoah, a podcast brimming with racist diatribes, Holocaust denial, antisemitism, and misogyny.

Lately, however, the echo has gotten new steam, thanks to Trump’s rallying of white supremacists.

It was shortly followed by the Coincidence Detector, a Google Chrome plug-in that searches webpages for Jewish-sounding names based on a user-generated database. By placing parentheses–the echo–around such names, it aims to target Jews for online harassment, from hate mail to vitriolic tweets, to even death threats. Last week, Google removed the app, citing its anti-hate-speech policy, but the app (bone-chillingly placed in the “fun” category) already had almost 2,500 downloads and a 5-star rating.

But now some Jews and non-Jews, including Jewish journalist (((Jeffrey Goldberg))) and non-Jewish think tank president (((Neera Tanden))), are turning things around, reclaiming the echo as a statement of dissent. So next time you see one of your friends making what seems to be excessive use of parentheses on Facebook or Twitter, consider that it just might be an act of solidarity and pride in the face of bigotry.