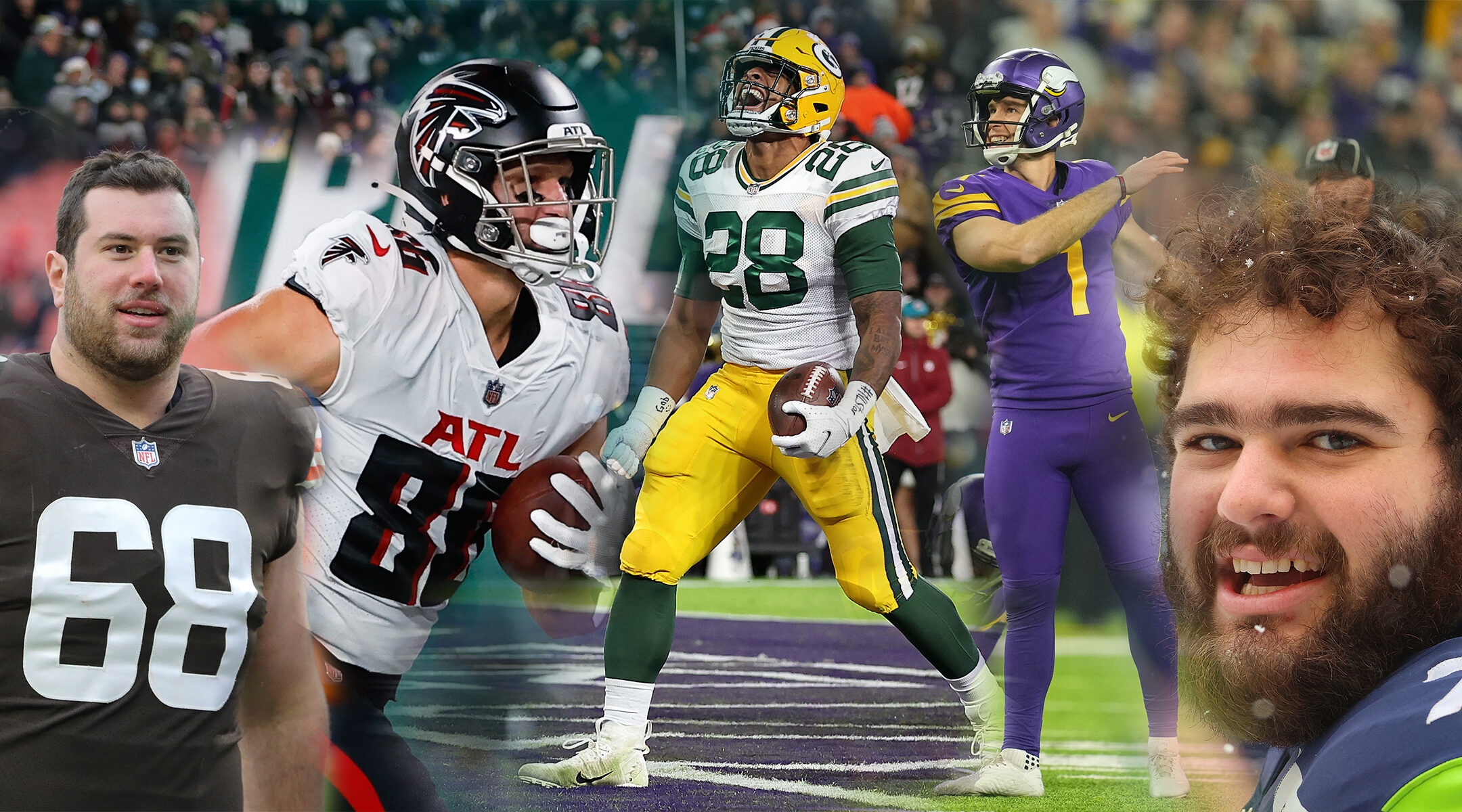 (JTA) — The 103rd season of the National Football League kicks off on Thursday, and there are a number of Jewish players to keep an eye on this year.

These are all of the Jewish players on NFL rosters entering Week 1 (listed in alphabetical order) and a few free agents who hope to return to the action soon.

Did we miss anyone? Give us a shout at sports@jta.org. And to keep up with our coverage of these players, be sure to subscribe to our weekly Jewish Sport Report newsletter here. 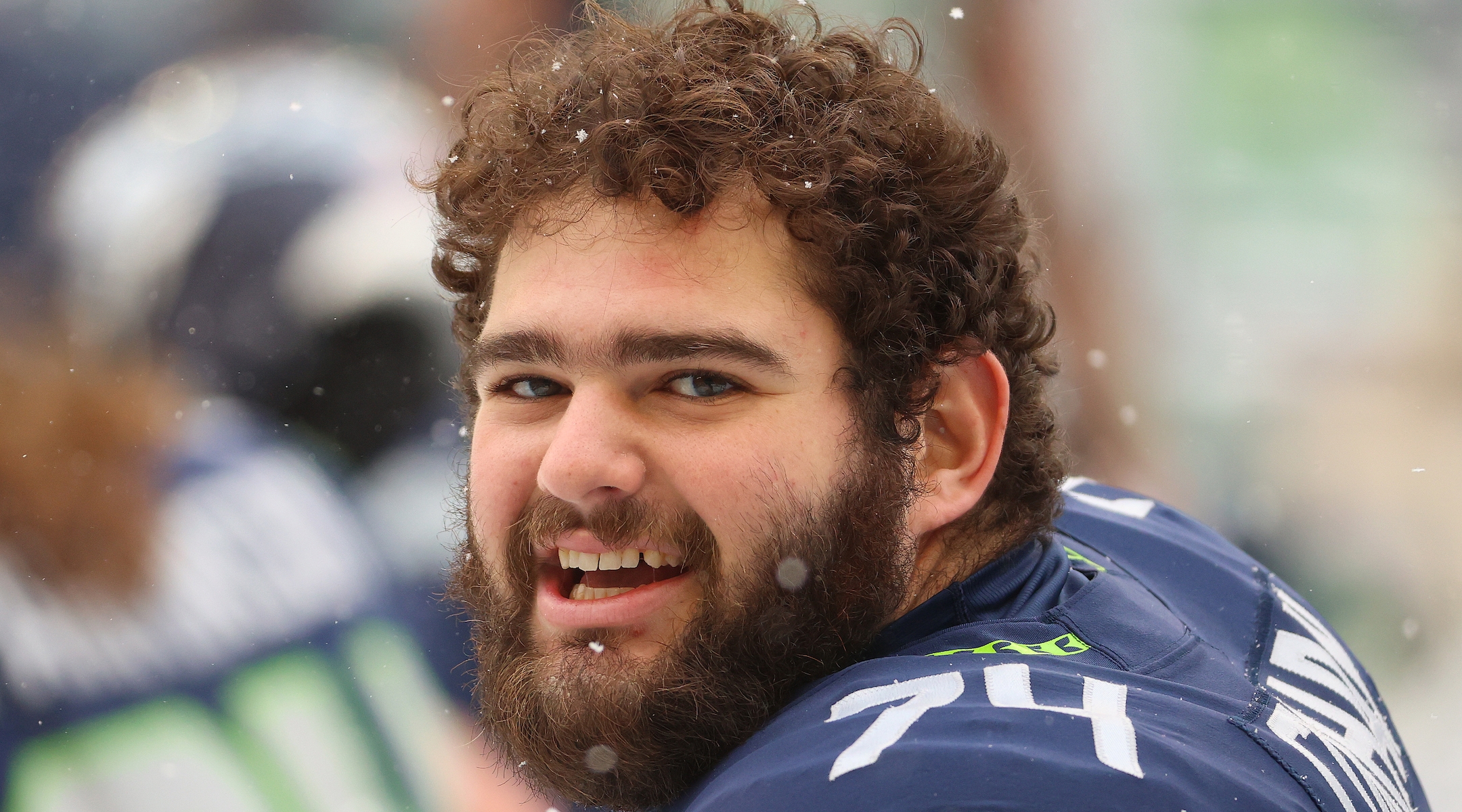 Jake Curhan of the Seattle Seahawks looks on before the game against the Chicago Bears in Seattle, Dec. 26, 2021. (Abbie Parr/Getty Images)

This Jewish summer camp alum and self-described “Bear Jew” — possibly a reference to “Inglorious Basterds,” or his 6-foot-6 and 315-pound frame, or both — is starting his second season with the Seahawks, who signed Curhan as an undrafted free agent last year. The 24-year-old appeared in 15 games in his rookie season, starting five at right tackle. Curhan will be an important piece on Seattle’s offensive line this season. 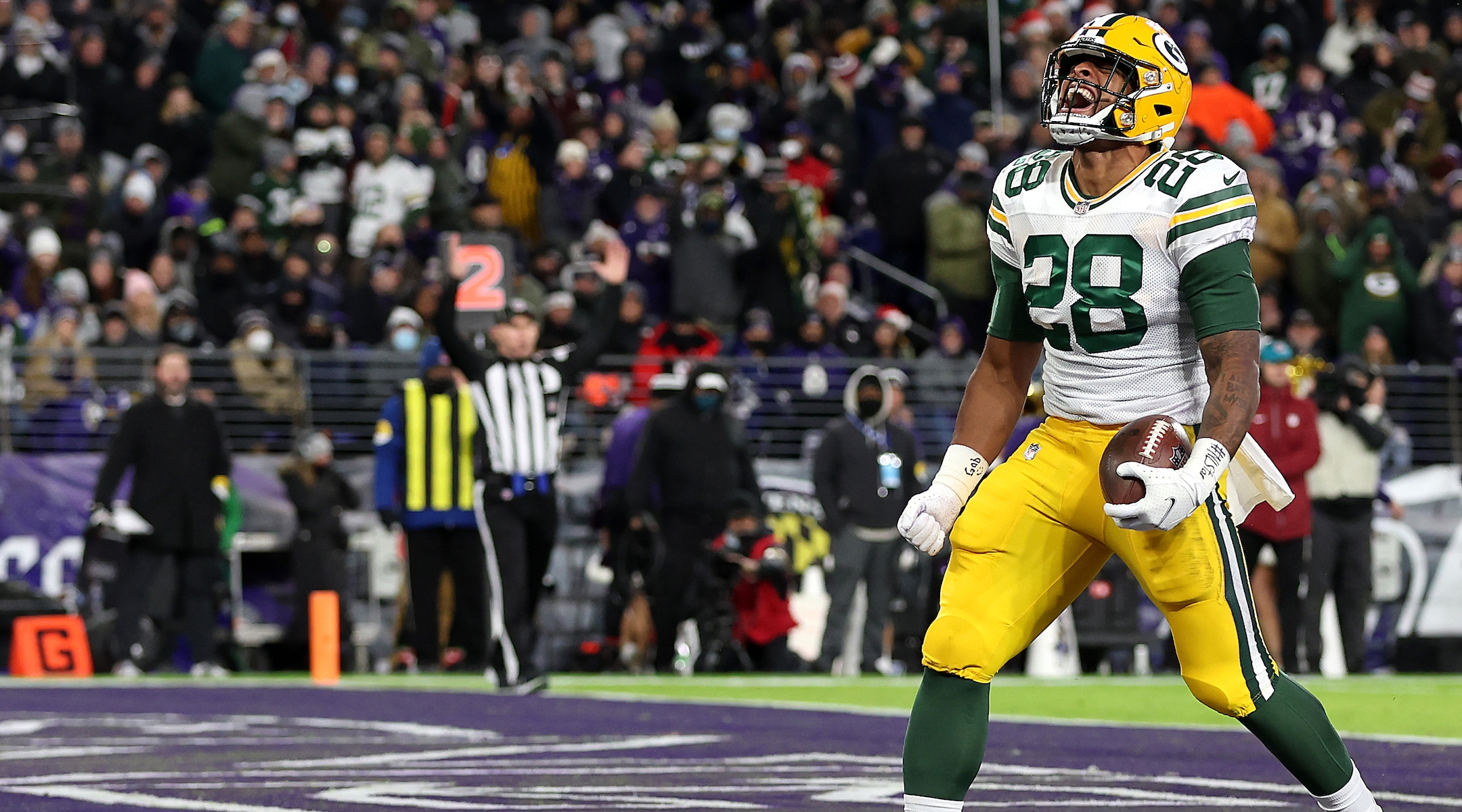 A.J. Dillon of the Green Bay Packers celebrates after rushing for a first half touchdown against the Baltimore Ravens in Baltimore, Dec. 19, 2021. (Rob Carr/Getty Images)

The former Boston College star is entering his third season in the NFL, where he is the second-string running back for Green Bay. Dillon rushed 803 yards last season with five rushing touchdowns and two receiving touchdowns. He spoke about his Jewish identity at the BBYO Jewish teen movement convention earlier this year — mentioning the time his mother joked that he “better be really good at this football thing,” to justify how much Hebrew School he had to miss. Dillon has also made viral TikToks about being Jewish. 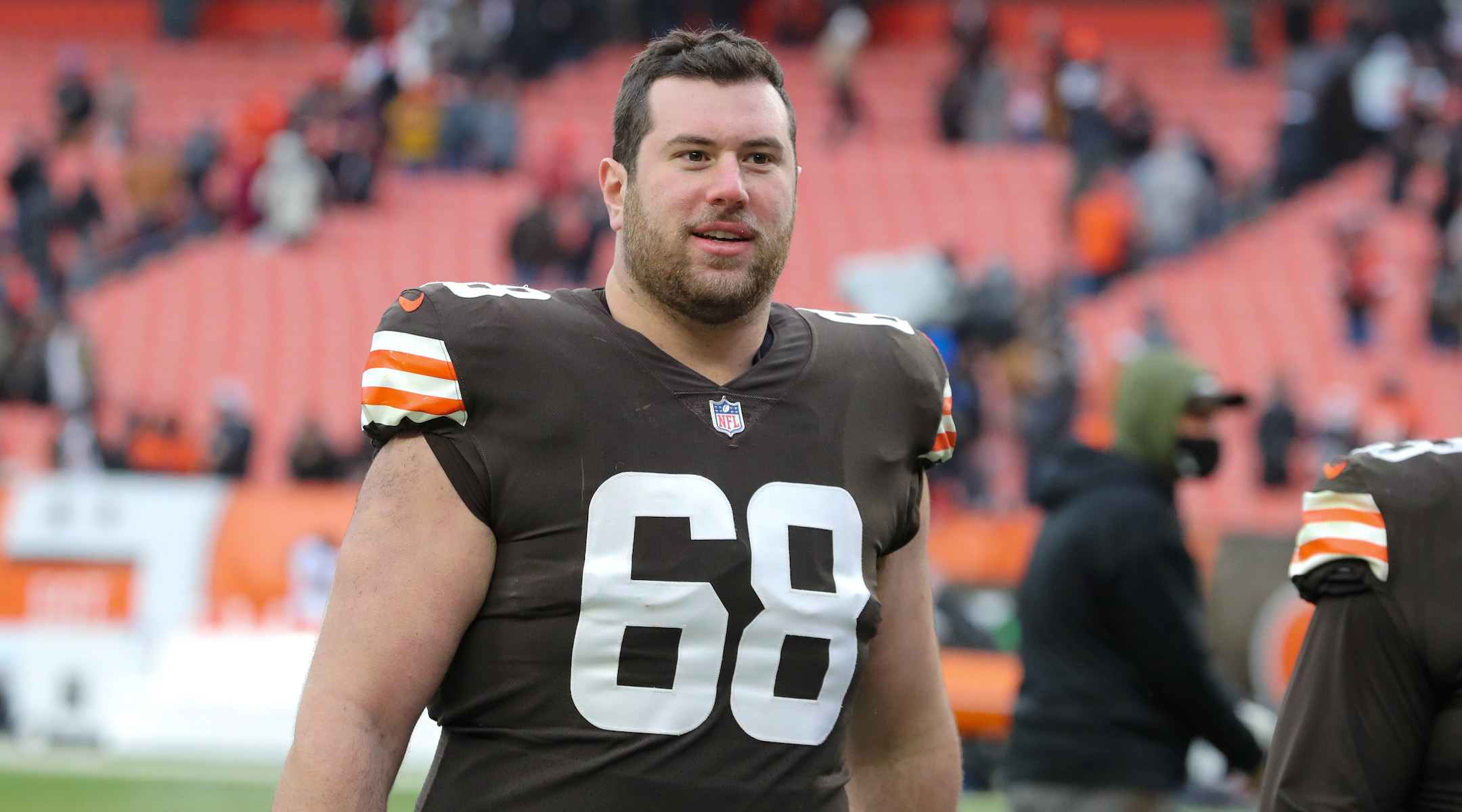 Dunn begins his third season with the Browns as a backup lineman after playing at the University of Maryland — which has one of the largest Jewish student bodies in the country. Prior to his time in Cleveland, Dunn bounced around with other NFL teams, the now-defunct Alliance of American Football and even the XFL. Dunn has appeared in 20 NFL games, including two starts. 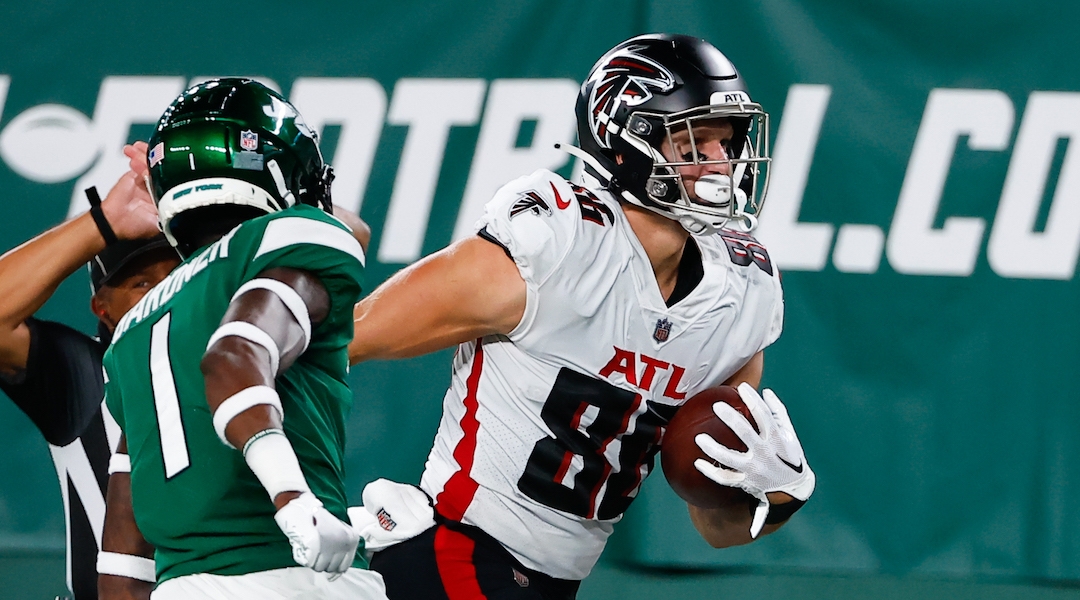 After four years with the Tennessee Titans, Firkser heads to Atlanta this season, where he slates in as the second-string tight end. The Harvard alum — who had a bar mitzvah growing up in New Jersey and loves latkes — has started one game in each of the last three seasons and has scored five career touchdowns. Firkser is close with Greg Joseph (see below), a fellow Maccabiah Games alum, from their time together on the Tennessee Titans in 2019. 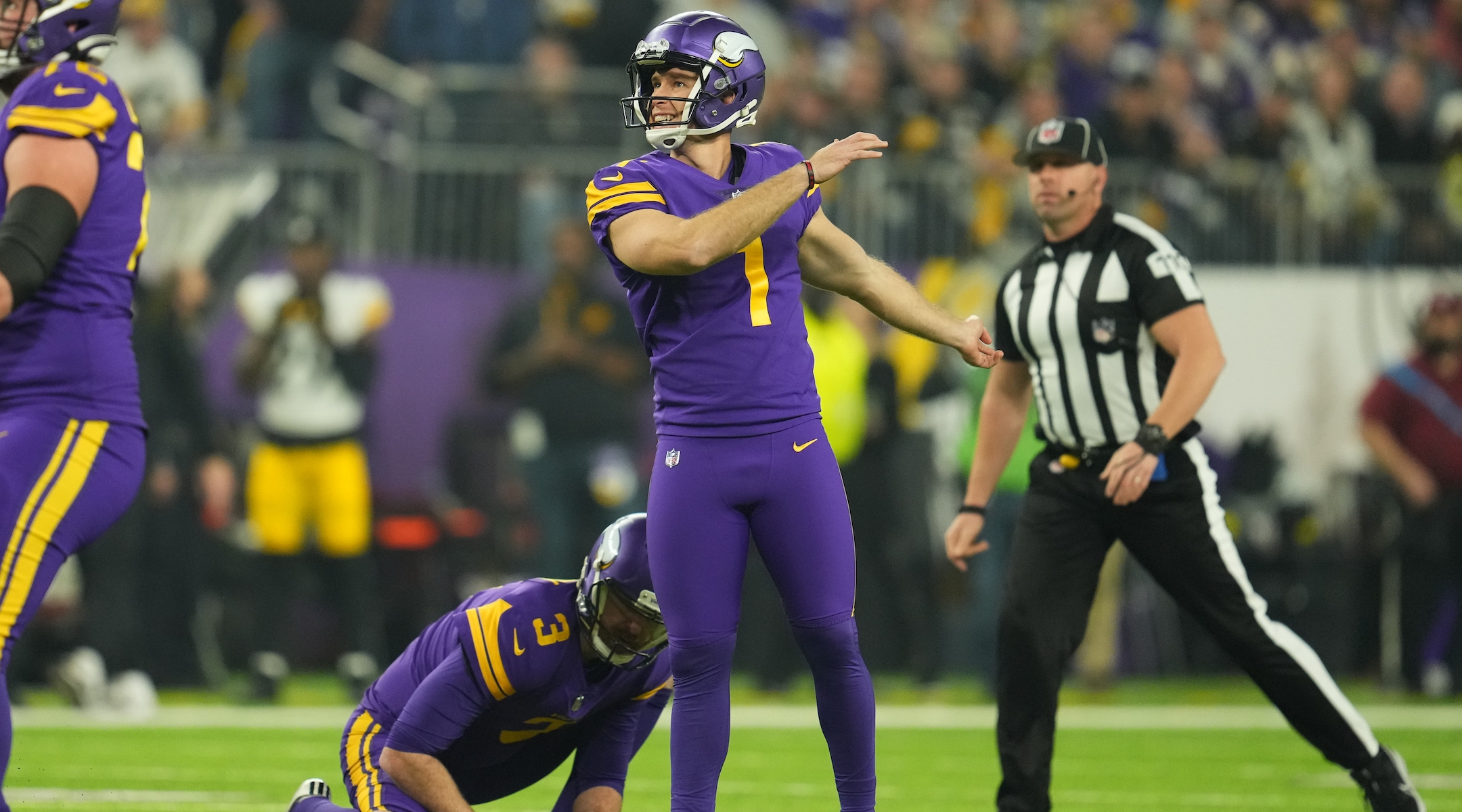 Greg Joseph of the Minnesota Vikings kicks against the Pittsburgh Steelers during a game in Minneapolis, Dec. 9, 2021. (Cooper Neill/Getty Images)

The South African-born Jewish day school grad is in his second season as the Vikings’ starting kicker. Joseph has sought out Jewish communities in each city he’s called home throughout his career, and last season he enjoyed an 87% field goal percentage, punctuated by a game-winner against the Packers in November. 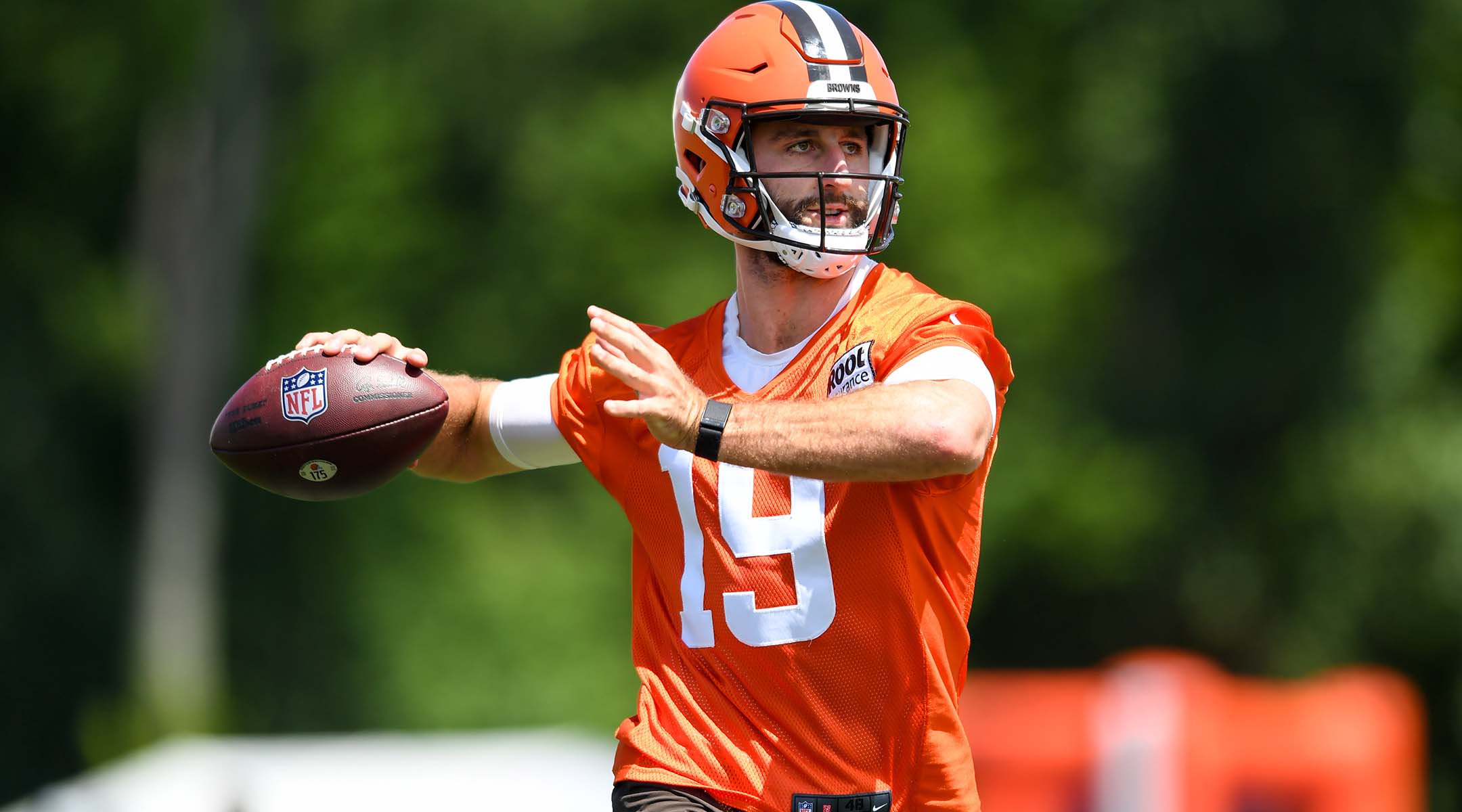 The former UCLA star and 10th overall pick in the 2018 draft — the first great Jewish quarterback star hope in decades — has spent most of his young career behind high-profile QBs on the depth chart. This season, Rosen begins the season on the Browns practice squad, after failing to earn a roster spot during the preseason — despite an opening on the team after its starting quarterback Deshaun Watson was suspended for 11 games over sexual misconduct allegations. In 24 career games, the 25-year-old Rosen has not shined when given his chances: he has a measly 54% completion percentage and more interceptions (21) than touchdowns (12).

Free agents — and one wild card

Ebner, a safety and special teams player, is a three-time Super Bowl champion who spent eight years with the New England Patriots before joining the New York Giants in 2020. He wrote an essay about his experience visiting Israel for the first time in 2019.

Sloman, a placekicker who was drafted by the Rams in 2020 and has also played for the Titans, was waived from the Pittsburgh Steelers practice squad in May. While at Miami University in Ohio, Sloman’s teammates called him the “Kosher Cannon.”

There’s also Julian Edelman, the retired Patriots star wide receiver who continues to drop hints about a possible comeback. The Super Bowl LIII MVP recently said he feels “extremely better than I did the last year-and-a-half of my career.”

Finally, two Jewish Super Bowl champions fans will not see this season: Mitchell Schwartz and Ali Marpet, who both retired this offseason.