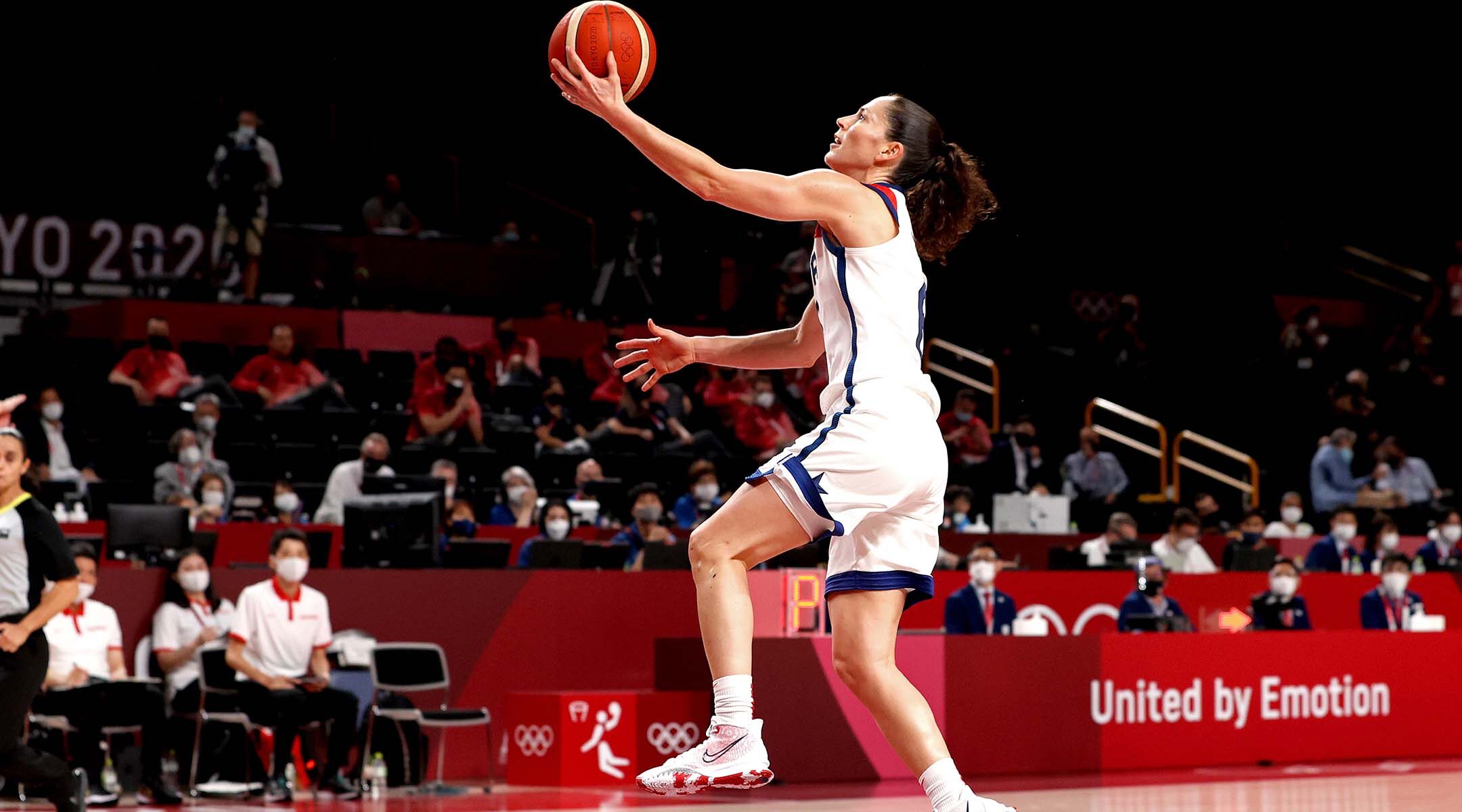 Sue Bird drives to the basket against Team Japan in the final of the 2020 Tokyo Olympics in Saitama, Japan, Aug. 8, 2021. (Kevin C. Cox/Getty Images)
Advertisement

(JTA) — Sports fans are obsessed with legacy. The term GOAT — greatest of all time — is thrown around more than a baseball during little league practice. Whether it’s LeBron vs. Jordan or Serena vs. Court, the sports world is consumed by debates and superlatives.

Sue Bird is a part of those conversations.

The Jewish basketball star’s playing career has come to an end, as her Seattle Storm lost their playoff series to the Las Vegas Aces on Tuesday night. The 41-year-old announced in June that she would retire after the season.

“I think 21-year-old me would be surprised I’m still going,” she told the Seattle Times last month. “Not because she didn’t think I had it in me. She wouldn’t have even thought those things. So I think she’d be really proud.”

Born in Syosset on New York’s Long Island, Bird’s paternal grandparents were Jewish immigrants from what is now Ukraine, changing their name from “Boorda” at Ellis Island. She grew up observing both Jewish and Christian holidays and did not have a bat mitzvah. But since she learned more about her Jewish heritage in the process of earning Israeli citizenship in 2006 — a move she called “basketball motivated,” so she could more easily compete on Russian teams during the WNBA offseason, since European squads only allow a small amount of American players on their rosters — she has felt more connected to her Jewish background, she told the Washington Jewish Museum.

“With my father being Jewish and still having relatives in Israel, it was an easy connection,” Bird said. “It was cool, because what I found was in this effort to create an opportunity in my basketball career, I was able to learn a lot about a culture that I probably wouldn’t have tapped into otherwise.”

Off the court, Bird has become an entrepreneur, an activist, basketball executive and analyst and soccer team owner. She’s achieved so much that the only way to really capture it is in a timeline. So we made one.

2000: After suffering an ACL injury during her freshman year at the University of Connecticut, Bird would begin an incredible three-year run at UConn. During the 1999-2000 season, the team went 36-1 and won a national championship. Bird also won the inaugural Nancy Lieberman Award — named for WNBA Hall of Famer Nancy Lieberman, who is also Jewish — given to the best point guard in women’s Division I college basketball.

2001: UConn would eventually lose to Notre Dame in the national championship game this year, but in a previous meeting between the two teams, during the Big East tournament final, Bird hit a game-winning shot so sweet that it inspired an entire book called “Bird at the Buzzer.”

2002: As UConn went undefeated (39-0) on their way to another national championship, Bird won player of the year honors across all of Division I, in addition to several other awards (including the Nancy Lieberman Award, for the third straight season). The Seattle Storm then selected Bird with the first overall pick in the 2002 WNBA draft, and in her rookie season, Bird was an All-Star, named to the All-WNBA First Team and finished second in Rookie of the Year voting. She wasted no time dipping into international competition as well, winning her first FIBA World Championship with Team USA in China. 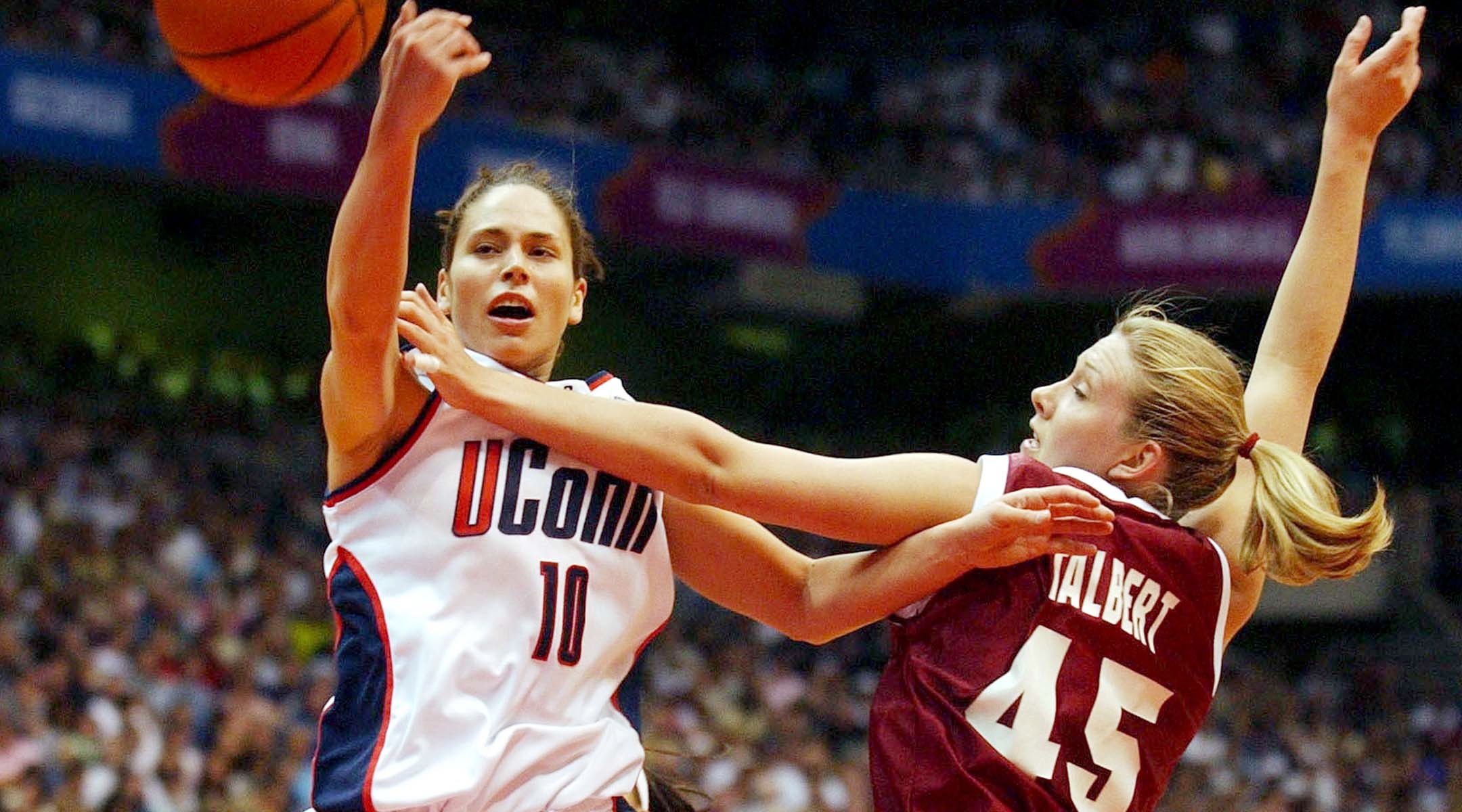 Bird fights for the ball during the NCAA championship game held at the Alamodome in San Antonio, Texas, March 31, 2002. (Max Becherer/NCAA Photos via Getty Images)

2003: Bird was an All-Star and named to the All-WNBA First Team.

2005: Bird was an All-Star and named to the All-WNBA First Team. She led the league in assists.

2006: Bird was an All-Star and named to the WNBA 10th Anniversary Team. She won bronze at the FIBA World Championship in Brazil.

2009: Bird was an All-Star and again led the WNBA in assists. She won a third consecutive EuroLeague championship and her first Europe SuperCup. 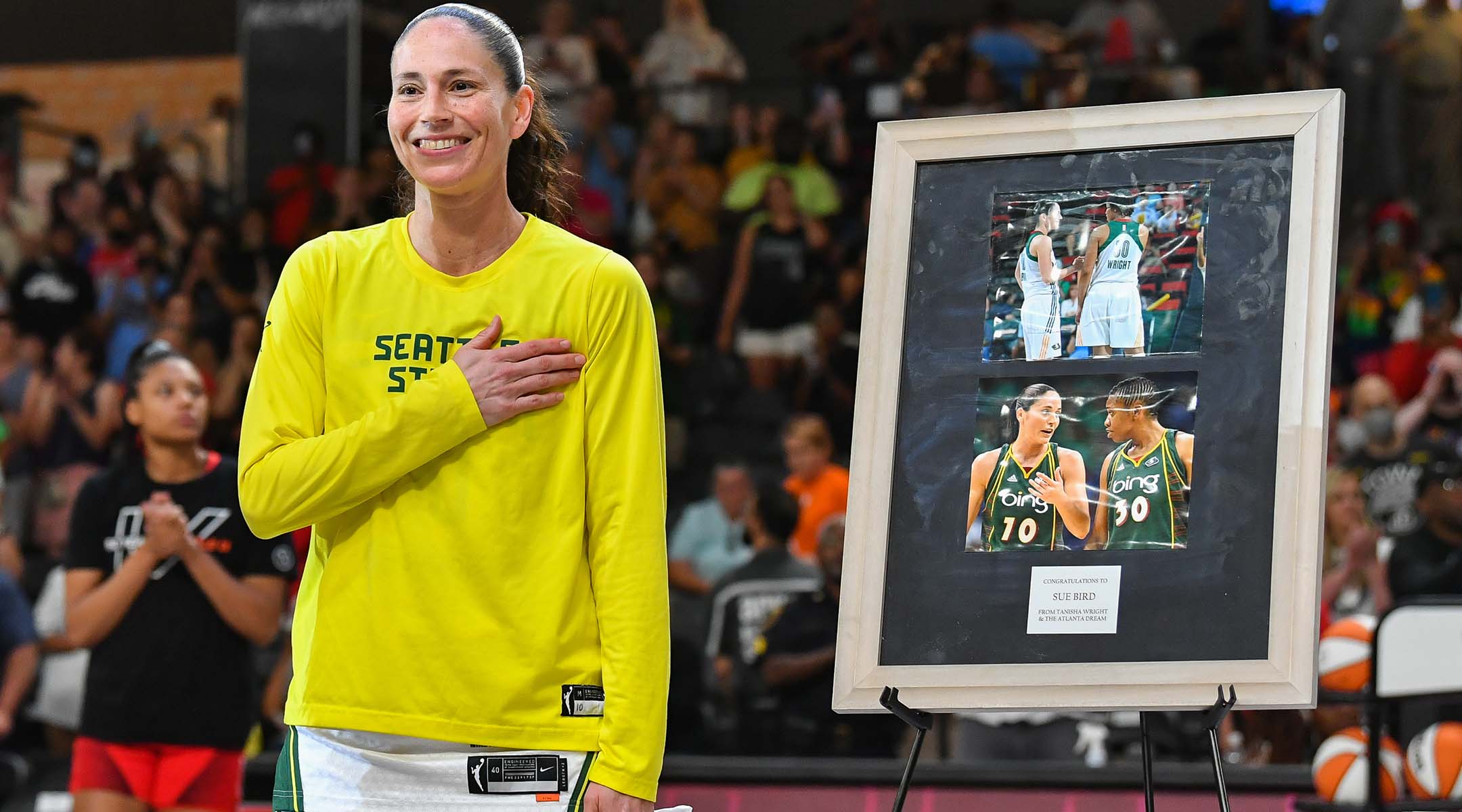 Bird reacts after receiving retirement gifts prior to the start of a game between the Seattle Storm and the Atlanta Dream in College Park, Ga., July 3, 2022. (Rich von Biberstein/Icon Sportswire via Getty Images)

2011: Bird was an All-Star and named to the WNBA 15th Anniversary Team and the All-WNBA Second Team.

2014: Bird was an All-Star and won her third FIBA World Championship in Turkey and her fifth Russian National League Championship.

2016: Bird enjoyed a career year after re-signing with the Storm. She was named to her fifth All-WNBA First Team, led the league in assists for a third time, and was named to the WNBA 20th Anniversary Team. Bird also won her fourth Olympic gold medal in Rio de Janeiro.

2017: Bird was named to her tenth All-Star Game and became the all-time WNBA assists leader.

2018: Bird led the Storm to a third WNBA championship and won her fourth FIBA World Championship in Spain. She was an All-Star, setting the WNBA record with her 11th selection. Bird also set the all-time record for WNBA games played. 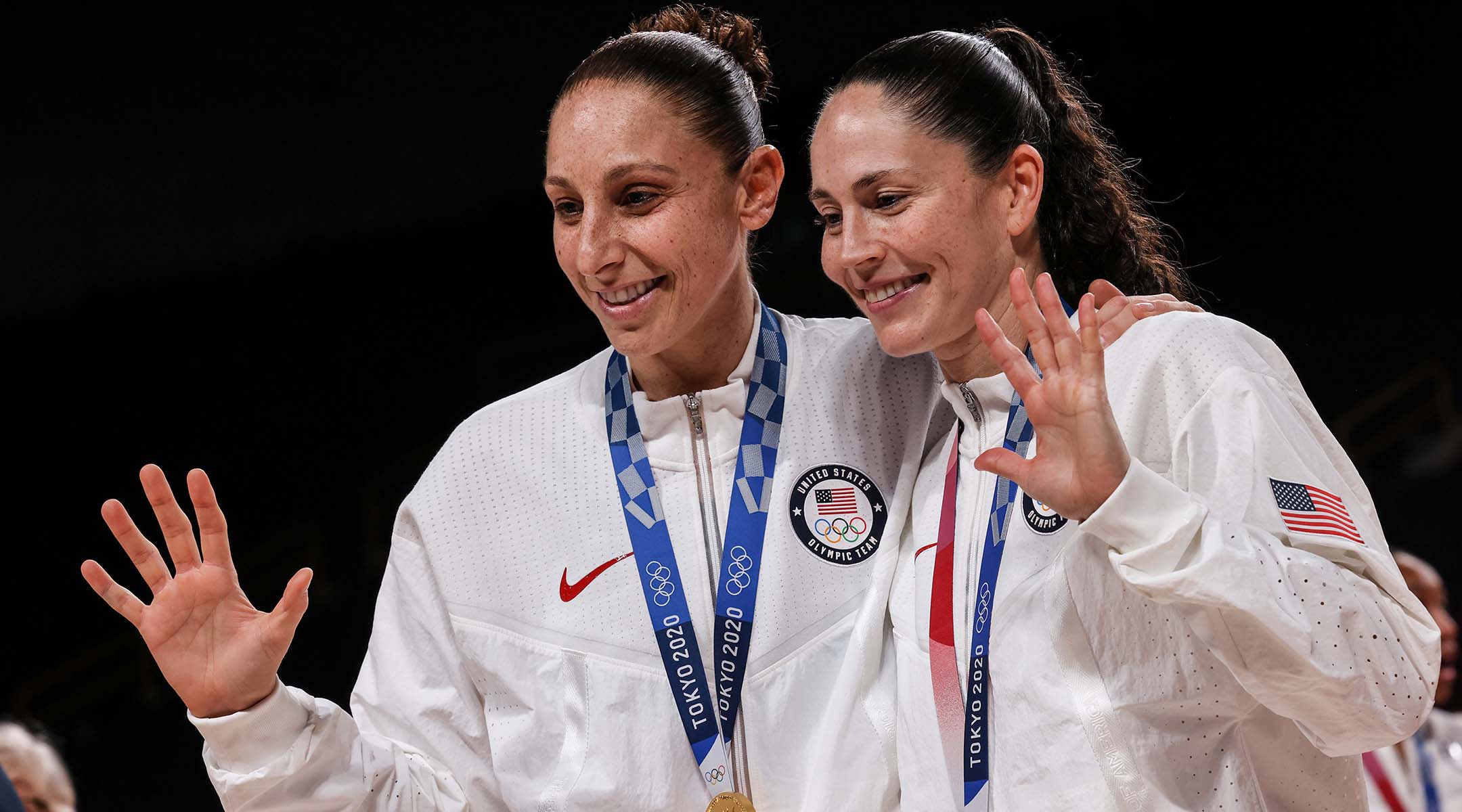 2020: Bird led the Storm to a fourth WNBA championship inside the league’s COVID bubble and became the only WNBA player to win championships in three different decades.

2021: Bird was an All-Star and named to the WNBA 25th Anniversary Team. She was also named the USA Basketball Female Athlete of the Year. Bird won her fifth Olympic gold medal in the rescheduled 2020 Tokyo games, during which she served as a flag bearer for Team USA.