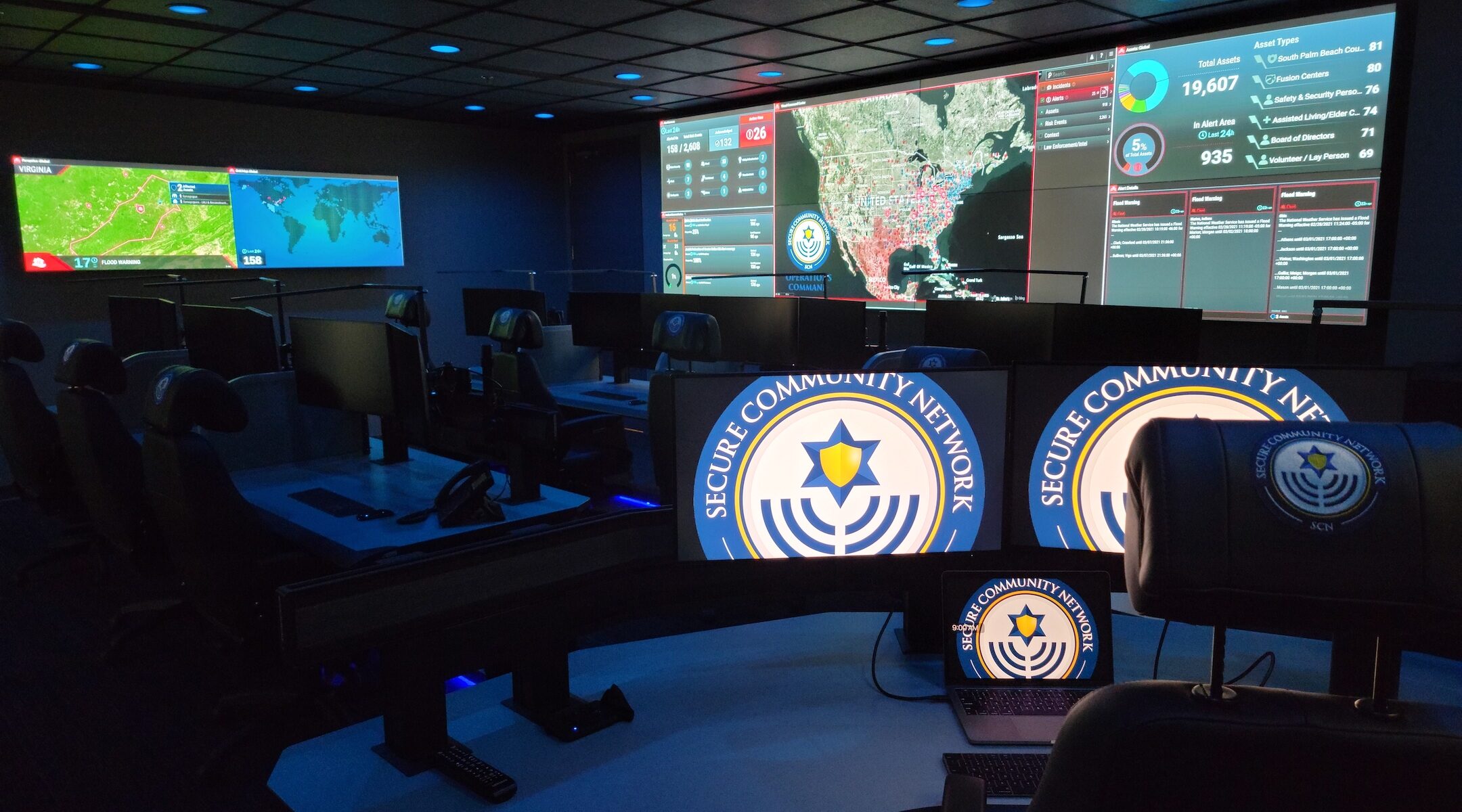 A view of the Secure Community Network's new command center in Chicago. (Courtesy of SCN)
Advertisement

(JTA) – How do you learn of an antisemitic threat on Shabbat if your congregation isn’t connected all day?

That’s the question that the Orthodox Union, the nation’s largest umbrella organization for Orthodox Jewish congregations, has wrestled with for the last few years. The most high-profile antisemitic attacks, including the Tree of Life synagogue shooting in Pittsburgh and the hostage-taking in Colleyville, Texas, have targeted houses of worship on Shabbat — a time when Orthodox Jews refrain from using phones, electronics or the internet.

“This was a concern that we have heard across the Orthodox community,” Michael Masters, CEO of the Jewish security nonprofit Secure Community Network, told the Jewish Telegraphic Agency. Referring to people who observe strict Jewish laws governing acceptable behavior on Shabbat, he voiced the question, “How do we alert those who are shomer Shabbos?”

On Tuesday, Masters’ group together with the Orthodox Union announced that it had identified a device that could allow security officials to do just that, without violating the laws around using electronics on Shabbat. It is inviting synagogues to purchase the device — which the OU said had been vetted by a leading rabbi, Herschel Schachter — at a discounted rate.

Along with another initiative to bolster tracking of antisemitic incidents experienced by Orthodox Jews, the effort is meant to help Orthodox Jews feel safe — including on Shabbat and holidays.

“With the High Holidays just around the corner, this is a time to take action to enhance security,” Orthodox Union President Mark Bane said in a press release. “While we pray nothing happens, if it does, we now have an efficient way of alerting our synagogues on a shabbos or holy day.”

Jewish law permits the violation of commandments if doing so could save a life, though rabbinic authorities have varied in their interpretation of what is considered life-saving. Using a communication system when there is clear and present danger is widely considered acceptable, but carrying one in case a danger emerges is not always. So some Orthodox synagogues have deputized security teams to carry phones, while others have not, the OU said in a communication to its member congregations this week.

The new system, available from the company Relay, which makes technology for businesses and families, takes the form of a “receiving device.” A rechargeable handheld device would be kept near the rabbi’s seat or worn on the belt clip of a designated congregant, Nathan Diament, executive director of the OU Advocacy Center, told JTA.

Some synagogues already have systems such as panic buttons installed, allowing them to communicate with law enforcement in case of an emergency. But unlike panic buttons, which require users to press them in order to trigger an emergency response, these always-on devices would function as megaphones for the SCN to broadcast any threats it detects from its Chicago command center, where it monitors law enforcement reports.

If the group detects that a particular synagogue or area is under threat, under criteria decided by the OU, it could then transmit a message to the synagogue via the device without needing to have a congregant turn it on.

This solution, Masters said, is “appropriate and acceptable” for Jews who don’t use electronics on the Sabbath, according to the Orthodox rabbis they consulted in developing the system. Asked whether it is an ideal system from a security perspective, he said, “This is a step forward in what has been a recognized gap in the community. It is a pivotal step forward, but we have more work to do.”

Some synagogues have been using the technology on a pilot basis. Now, the OU is urging more of them to buy Relay devices, at a rate that it said had been discounted on their behalf. Synagogues that opt to buy the devices could potentially get them by Yom Kippur in two weeks, according to an OU official. They will also need to pay an annual service fee. The OU and Secure Communities Network regularly help Jewish institutions, including individual congregations, obtain public funding to support security ventures.

The OU also unveiled a new online portal for people to report incidents of antisemitism, which it is marketing to members with a campaign called “Hated? State It.” The group’s hope is that such a form will help them collect data on antisemitic incidents specifically targeting Orthodox Jews.

The move to encourage more Orthodox self-reporting, Masters said, was in response to “the increase in attacks on the Orthodox community specifically,” referring to reported incidents of visibly Orthodox Jews being attacked on the street in New York, as well as attacks on Chabad Lubavitch rabbis and congregations in places like Poway, California, and Boston. Still, Masters said the SCN would not treat security in Orthodox spaces any differently from non-Orthodox ones.

“We can’t get into the idea that one place is under more heightened threat of attack than another,” he said. “All of our facilities are at risk.”