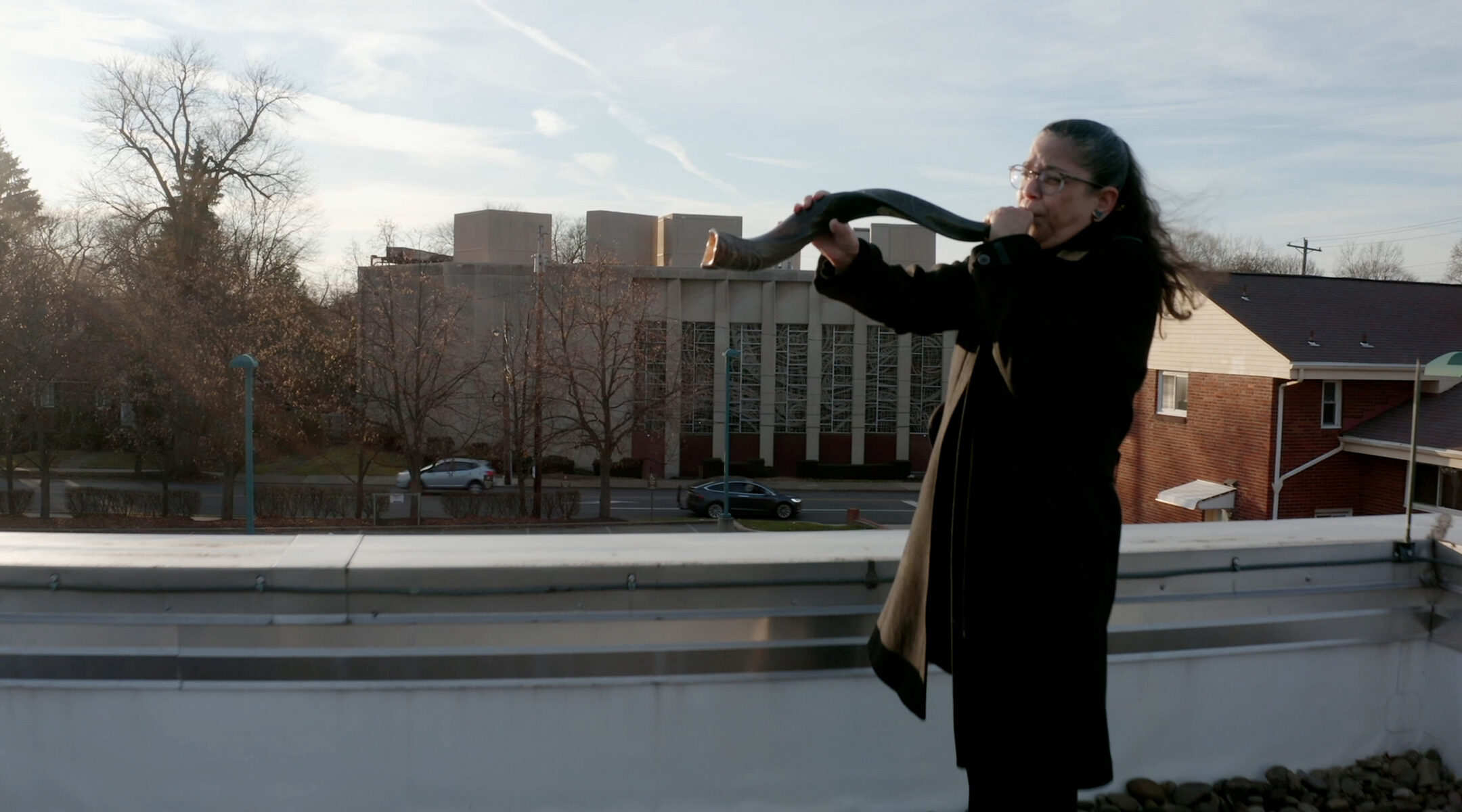 Audrey Glickman, a survivor of the 2018 Tree of Life synagogue shooting in Pittsburgh, blows the shofar outside the building in the new HBO documentary "A Tree of Life." (HBO)
Advertisement

(JTA) – Trish Adlesic was visiting her father in Pittsburgh on the day a gunman walked into the city’s Tree of Life synagogue building and murdered 11 people.

Almost immediately, the director started filming her surroundings with the aim of producing a documentary about the tragedy, bringing on a Tree of Life congregant, Eric Schuman, as an editor and producer. Drawing on her own experiences conducting “trauma-informed” interviews, Adlesic reached out to survivors hoping to create “a platform for them to speak out, to speak about their loved ones, to honor them, to pay tribute, [and] to try to find a way to unite us.”

The resulting documentary, “A Tree of Life,” premieres on HBO Wednesday, four years to the day after the attack — and during a week when attention in the United States has once again turned to antisemitism, following comments by the rapper Kanye West that have been embraced by white supremacists.

Adlesic told the Jewish Telegraphic Agency she hopes the timing of the film “only reinforces the urgency for the conversation that needs to be had, and the intervention that needs to be had.” She’s had support from several big names: performers Michael Keaton and Billy Porter and Jewish entrepreneur Mark Cuban, all of whom grew up in Pittsburgh, have all signed on as producers, while Jewish Broadway star Idina Menzel wrote and performed an original song for the film.

The movie was in a large sense shaped by what the survivors themselves wanted. Adlesic, whose previous documentary “I Am Evidence” interviewed rape victims about rape kit backlogs, took her approach to her subjects’ trauma seriously, relocating to Pittsburgh to make herself more readily available to them whenever they felt like talking.

Working with survivor and Congregation Beth Shalom staffer Audrey Glickman (who blows a shofar in front of the building in the film’s opening sequence), Adlesic allowed subjects to shape the direction of their interviews. They wound up touching on a wide range of topics related to the shooting, from their own Jewish faith to gun legislation to a minute-by-minute recounting of the attack itself — all of these topics, and more, are touched on in the film.

“A harrowing, horrific attack like this brings many different thoughts about what the full repercussions are,” Adlesic said.

In an unusual move, the filmmakers also allowed their subjects to provide feedback on early cuts of the film. “My film team was like, ‘Trish?’” Adlesic recalled. “I said, ‘No, we can’t have it both ways.’ You can’t just take, you know? You also have to give. And part of that has to be within their comfort, and what they want the world to know.”

One of the strangest sequences in the film unfolds about an hour outside of Pittsburgh, where a non-Jewish couple operate a gun shop out of a restored former synagogue — complete with stained-glass windows and a Star of David chandelier.

Adlesic declined to share where the gun shop is located, saying only it was in “an old steel town” and that the shop had opened for business prior to the Tree of Life shooting. She went to interview the owner after learning about the shop from a Pittsburgh Jew in the aftermath of the shooting, and found the existence of the shop itself to be an example of “atrocious insensitivity.”

After interviewing one of the owners for the film, she attempted to convince them to let her pay to remove the Jewish signifiers (“Pittsburgh is known for its bridges and I wanted to make a scene where I thought we could create a bridge with him”), but they turned down her offer.

She hopes to ultimately raise enough money to buy the property and turn it into a museum — one of many ways the filmmakers hope to turn their documentary into a tool to fight different kinds of hate. (An anti-hate initiative for schools is also in the works.)

Adlesic declined to share information about her own Jewish background, saying she saw herself as a “conduit” and preferred the focus of the film’s coverage be on the survivors. (She has said elsewhere that her father was Jewish, and that her grandfather-in-law helped bring Jews to New York when the Nazis first came to power.) But she doesn’t see the Tree of Life shooting as solely a Jewish tragedy.

“I think it started out as a Jewish story, became a Pittsburgh story, and now it’s a universal story,” she said.

“A Tree of Life” airs on HBO Wednesday and streams on HBO Max.