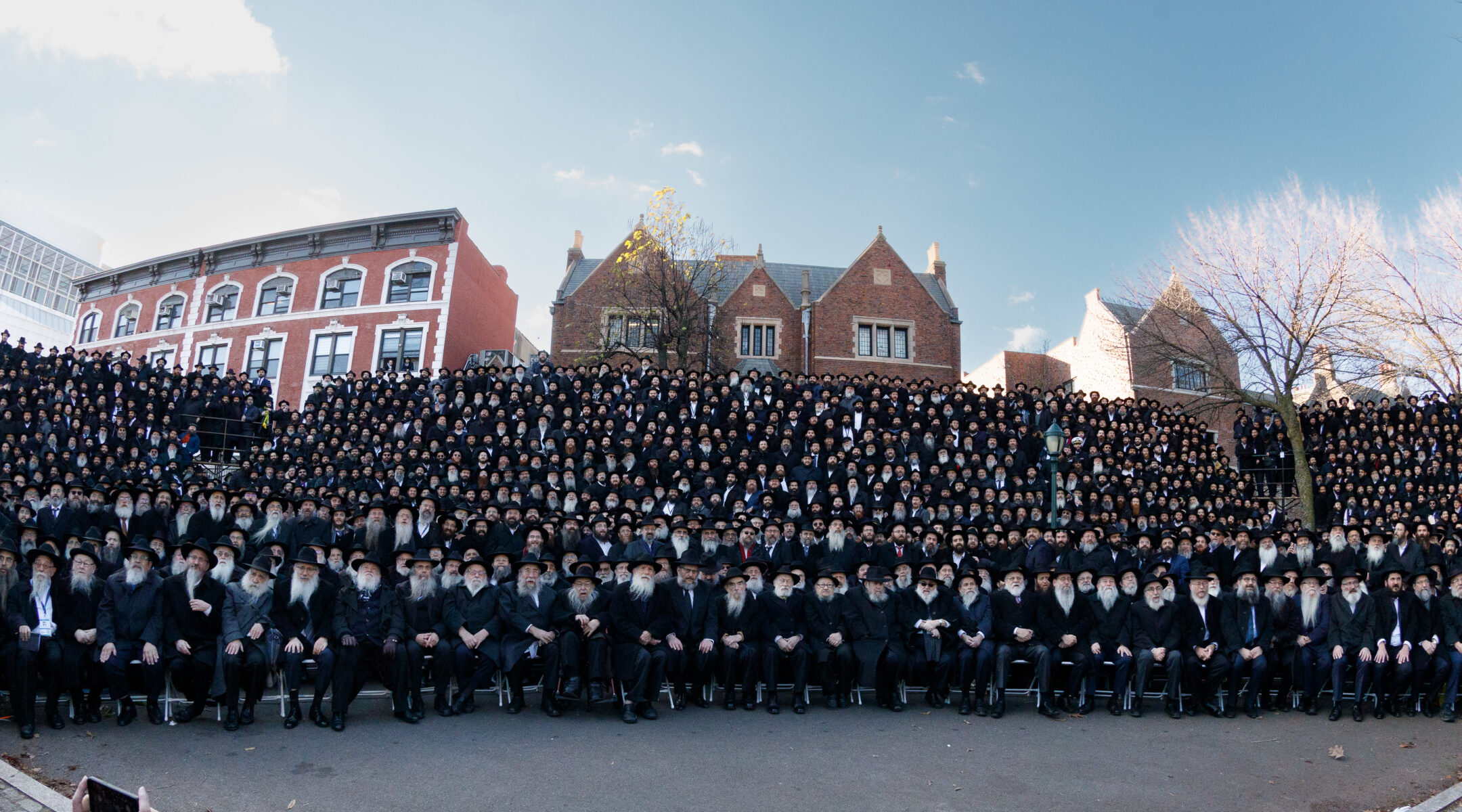 (JTA) — It was unseasonably cold on Sunday morning when thousands of rabbis crowded on risers in front of Chabad-Lubavitch headquarters in Brooklyn to snap a photograph.

The group photo is a signature moment during any gathering of the Orthodox movement, allowing the movement to create a visual record of its growth: Unique among Hasidic movements, Chabad is known for sending rabbis and their wives to far-flung locations around the globe to minister to local Jews, regardless of denomination or beliefs. (A picture taken at a smaller gathering of Chabad rabbis in Kazakhstan last year netted the group a $200 fine for violating a ban on large gatherings.)

And the picture taken early Sunday was the largest yet, as some 6,500 rabbis from all over the world descended on Crown Heights, Brooklyn, for the first full-size conference since 2019. Known within the movement as the kinus hashluchim (conference of emissaries), the gathering is a can’t-miss event featuring workshops, prayer, socializing and a gala at which the achievements of the previous year are recounted with great fanfare.

This year, those achievements stretched to a long list as Chabad is in the middle of a push to create 1,200 new institutions — synagogues, schools, camps, ritual baths and more — during the year marking the 120th birthday of the movement’s last leader, Rabbi Menachem Mendel Schneerson, who died in 1994.

The international Chabad community has pulled out extra stops for Schneerson’s birthday because of the special significance of 120 in Jewish tradition. Moses was 120 when the Bible records his death, and that age is considered the ideal duration of a good life. “To 120 years” is a traditional accompaniment of birthday greetings for many Jews, especially in Orthodox communities, and Schneerson was a notable proponent of robust birthday celebrations.

Chabad says it is launching centers in more than 120 new locations over the course of year, and announced a new one during a gala Sunday night: in Zambia, which will be the 110th country to house a Chabad emissary. The gala also saw the dedication of 36 Torahs that rabbis will carry home to Kampala, Uganda; Ibiza, Spain; Alameda, California, and other locations where the local Chabad previously did not have one. The group also announced a new $2.5 million overnight camping initiative. 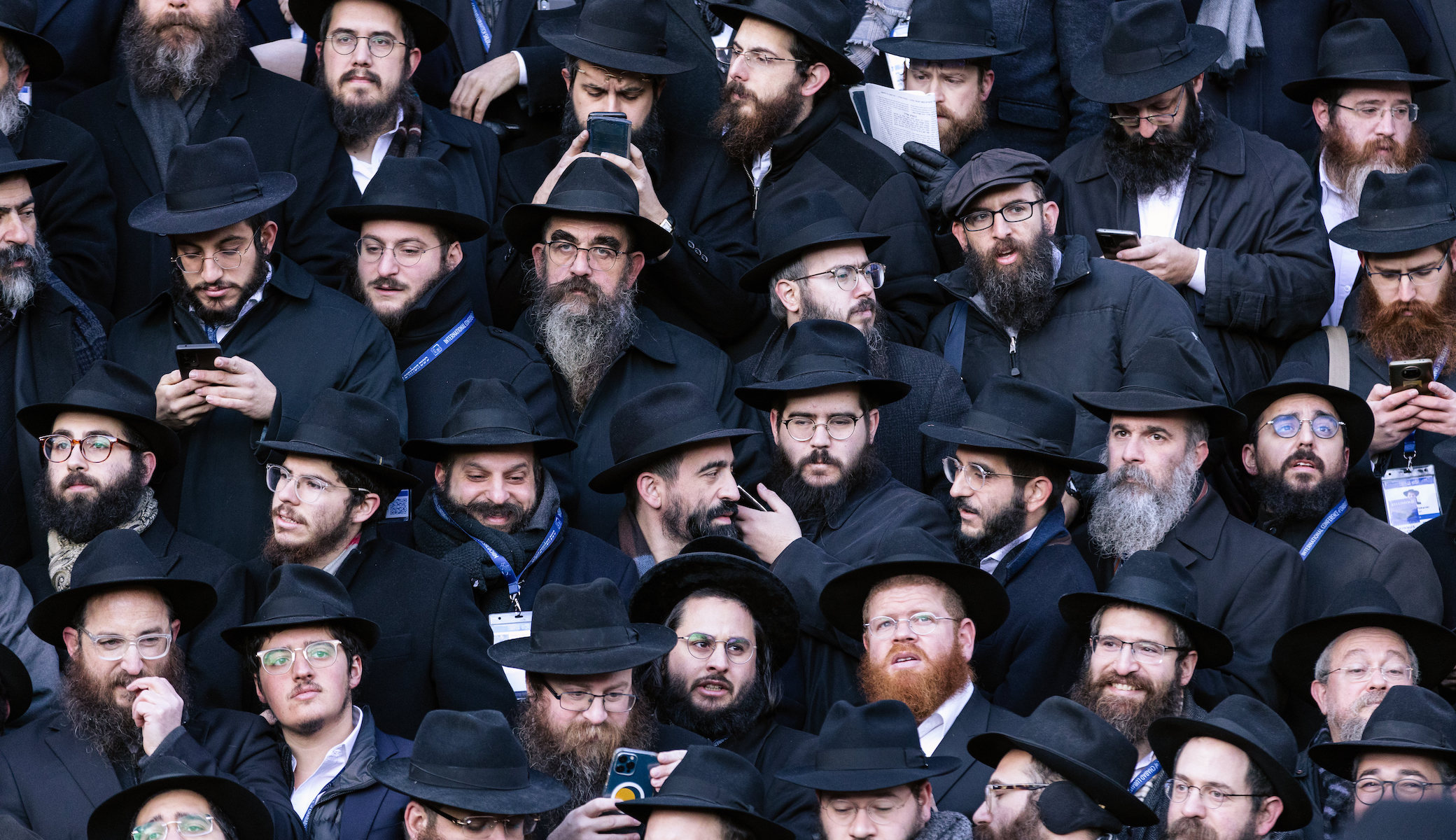 Rabbis from all over the world descended on Crown Heights, Brooklyn, to have their photo taken at the largest gathering of Chabad “emissaries” since the start of of the pandemic, Nov. 20, 2022. (Shmulie Grossbaum/Chabad.org)

At the gala, which was attended mostly by rabbis but also about 1,000 guests, often major local supporters, special attention was paid to the movement’s 177 emissaries in Ukraine, who have been scrambling to reboot their operations to meet wartime needs since Russian troops invaded Feb. 24. Videos showcased the relief efforts that the rabbis have spearheaded; Rabbi Yechiel Levitansky of Sumy in northeastern Ukraine spoke about how “40 brave Jews” celebrated Sukkot together despite bombings and curfews. Rabbi Nochum Tamarin, who serves small communities, got a standing ovation following a video about his work during the war.

A traditional roll call of the emissaries by location paused for special shoutouts to the two countries that appear headed for a long winter of war. “Let us welcome the shluchim to the country where it all began, the shluchim to Russia,” the emcee said as music and clapping broke out. The movement was based in the late 18th and early 19th centuries in what was then the Russian Empire.

After the single emissary in Uganda was recognized, the next emissary got a similar ovation: “Please join me in welcoming the shluchim from the birthplace of our dear rebbe, the country of Ukraine!”

The emphasis on Ukraine’s sovereignty was notable for a religious movement that has been in a delicate position since Russia invaded Ukraine Feb. 24. Chabad has historic roots in both countries and they are home to the largest number of emissaries outside of the United States and Israel, with 202 in Russia joining the 177 in Ukraine. In keeping with Chabad’s ethos that rabbis remain in the community where they are sent, through thick and thin, the Russian rabbis have continued their operations amid pressure from the government to back the war.