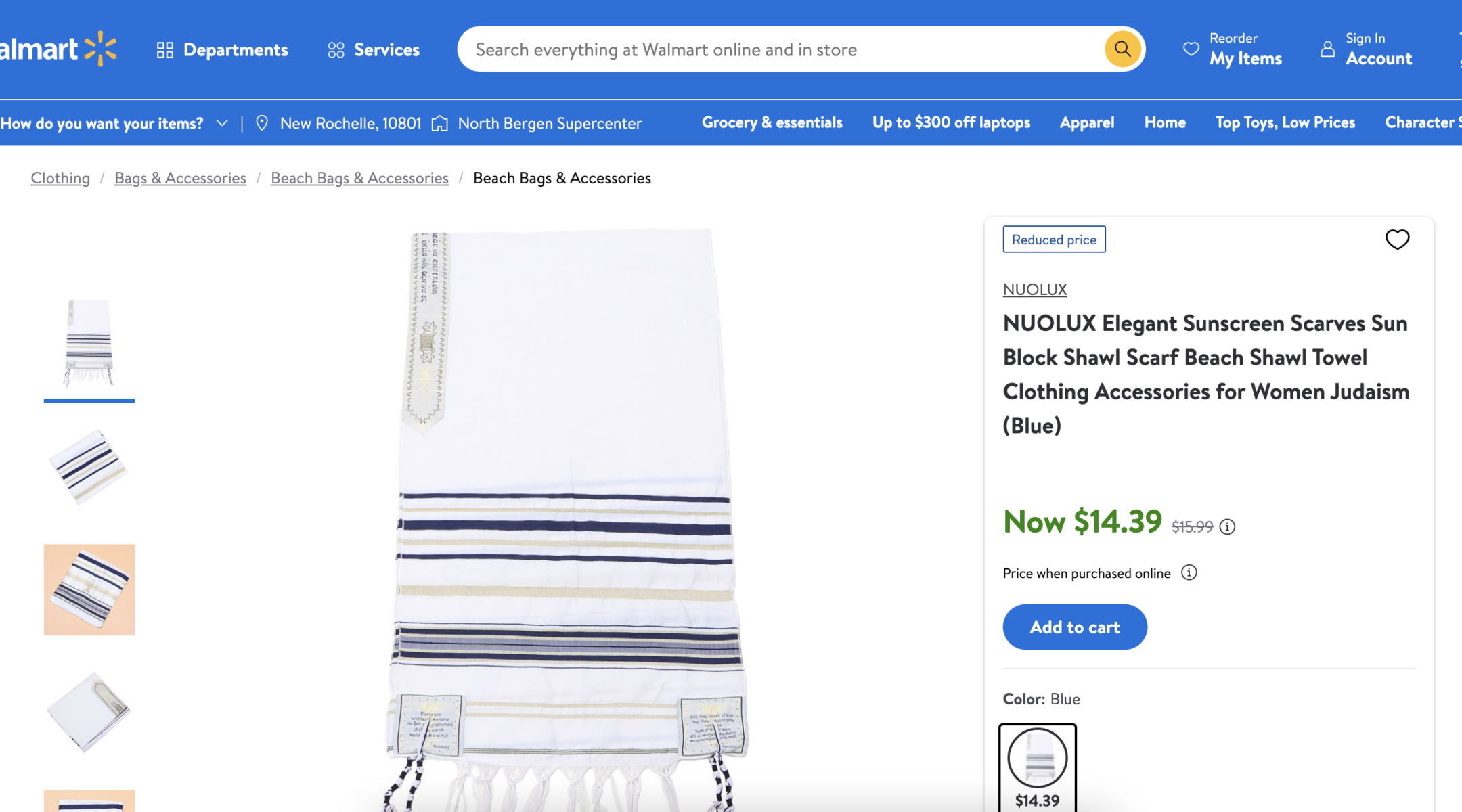 A tallit was for sale on Walmart's website until it was removed after Jewish customers complained. (Screenshot)
Advertisement

(JTA) — “Why wear a tallis to shul when you can wear a very real product from Walmart?” Ilan Kogan, an Orthodox rabbinical student, asked on TikTok late Monday.

Kogan was talking about “Elegant Sunscreen Scarves Sun Block Shawl Scarf Beach Shawl Towel Clothing Accessories for Women Judaism (Blue),” the search engine-optimized title for a product that looked a lot like a tallit, the shawl worn by Jews during morning prayers.

His post was one of several to call attention to the product listed on Walmart’s website, with reactions ranging from curiosity (“I have so many questions,” tweeted Atlantic columnist Yair Rosenberg) to outrage (from the watchdog group Stop Antisemitism). By Tuesday afternoon, Walmart had removed the item, which had been listed for $40.99, as well as a second with a similar name from a different seller that had been available for the cut-rate price of $14.49.

“Walmart has a robust trust and safety program, which actively works to prevent items such as these from being sold on the site,” a spokesperson told the Jewish Telegraphic Agency. “After reviewing, these items have been removed.”

Like other products that have drawn criticism from Jewish consumers — such as “Schindler’s List” leggings printed with scenes from the iconic Holocaust film — the “elegant sunscreen scarves” reflect the oddities of contemporary merchandising.

In this case, the products were sold by third-party vendors using Walmart’s online marketplace, where shoppers can browse up to 60 million items. Those products are not subject to the same practices as those that Walmart sells directly, and many of them have names that are more a list of keywords than an accurate description of what a customer might receive.

Additionally, the tallit for sale were not actually intended for use by Jews. The printed Bible verses on the corners and the fish imagery visible in some of the product photos are giveaways that the items are made for Messianic Jews, who pray using the trappings of Jewish tradition while also believing in the divinity of Jesus.

Messianics and others who appropriate Jewish practices, including, increasingly, right-wing Christian activists, represent a growing market for ritual items. A search for “tallit” returned 286 items on Walmart’s website on Tuesday afternoon; some were clearly marked as Messianic but many others lacked language indicating that they are not traditional Jewish ritual items.

A search on Amazon, home to the internet’s largest storefront, turns up even more results, some coming from reputable Judaica brands but many others from brands seeking to appeal to Messianics and traditional Christians.