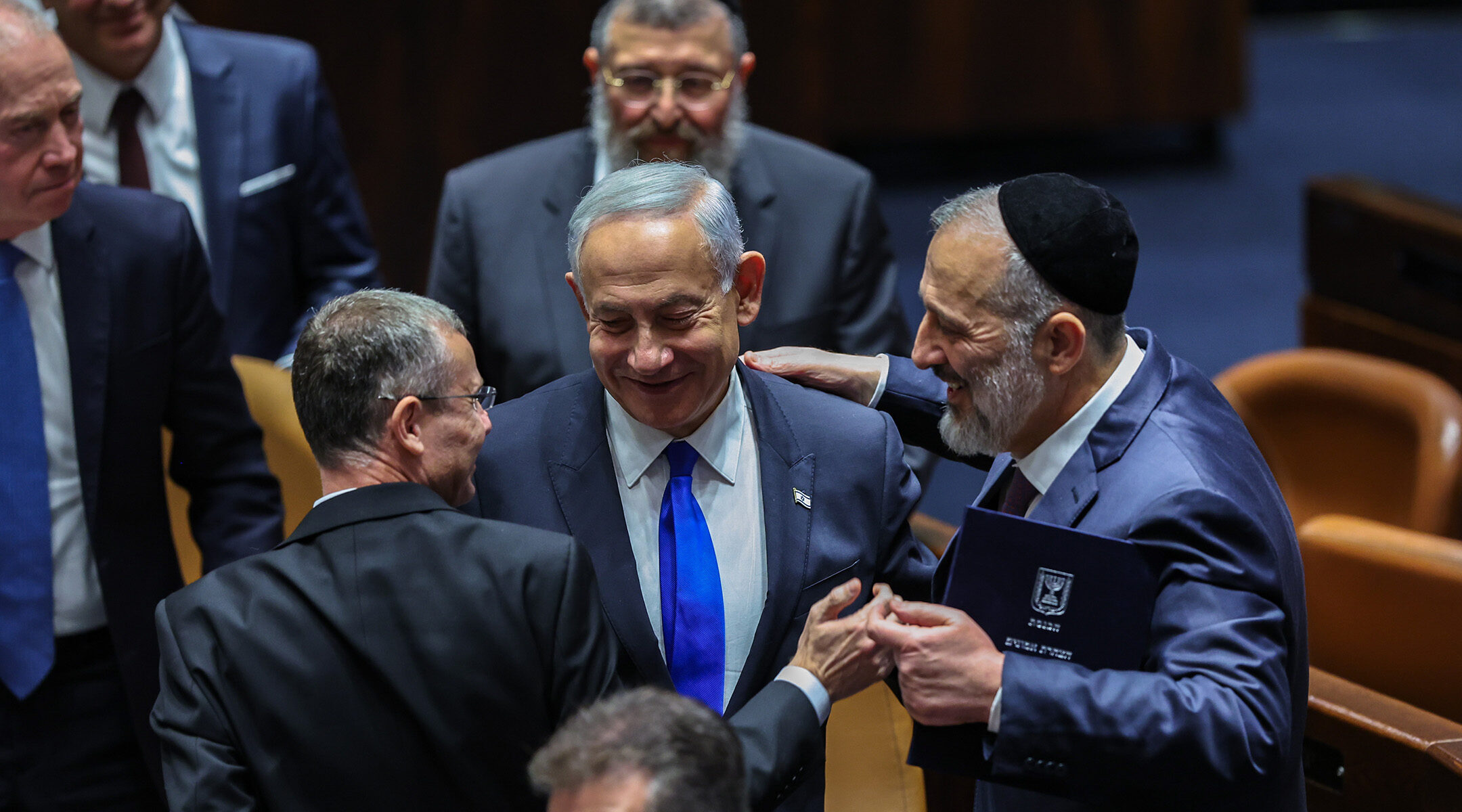 Benjamin Netanyahu, center, with Aryeh Deri, right, and other lawmakers at a plenum session on forming the government, in the Israeli parliament in Jerusalem, Dec. 29, 2022. (Yonatan Sindel/Flash90)
Advertisement

(JTA) — Benjamin Netanyahu completed his stunning return to power by swearing into office a historically right-wing government coalition and beginning an unprecedented sixth stint as Israeli prime minister on Thursday.

After winning a decisive mandate in November elections, Netanyahu spent several weeks negotiating with figures once relegated to the far-right fringes of Israeli politics to secure enough parliamentary seats to form a majority coalition. Many of those figures were given Cabinet or other key positions, even though members of Netanyahu’s Likud Party will fill the roles of foreign minister, defense minister and justice minister.

During coalition negotiations, several ministry leadership positions were modified or scheduled such that different lawmakers will rotate into some positions over time. Itamar Ben-Gvir — a former follower of the extremist Meir Kahane and a pro-settler provocateur known for his anti-Arab rhetoric — will have a newly created portfolio as national security minister, with unprecedented control over Israel’s police forces. The right-wing party Noam, led by a lawmaker who describes himself as a “proud homophobe,” will get 70 million NIS annually (almost $20 million) to create and operate a new “Department of State Jewish Consciousness.”

Some lawmakers were given multiple powers. Bezalel Smotrich, the anti-LGBTQ head of the Religious Zionist Party, will be finance minister, but he will also appoint the next head of the military unit that handles Palestinian border crossings. Aryeh Deri, head of the haredi Orthodox Shas Party who has served prison time for taking bribes during a former stint as interior minister, will return to that ministerial role and also lead the health ministry.

Coalition agreements released on Wednesday revealed the government’s priorities, including advancing West Bank settlement expansion, boosting “the Jewish character of the state and the heritage of Israel” and increasing national security.

RELATED: Who’s who in Israel’s new far-right government, and why it matters

Heeding international criticism over the makeup of his coalition — especially from the United States, where some communal leaders have begun to question their ties to Israel — Netanyahu has in recent weeks said that he will not allow his coalition partners to pass policies that would endanger LGBTQ or Arab citizens. In a speech to the Knesset, or Israel’s parliament, on Thursday, he emphasized that his top priorities will be curbing Iran’s nuclear program, connecting peripheral Israeli communities to city centers with new infrastructure, and bolstering law and order.

Outgoing Prime Minister Yair Lapid tweeted: “We pass on to you a state in excellent condition. Try not to ruin it, we’ll be right back. The handover files are ready.”