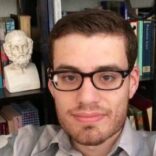 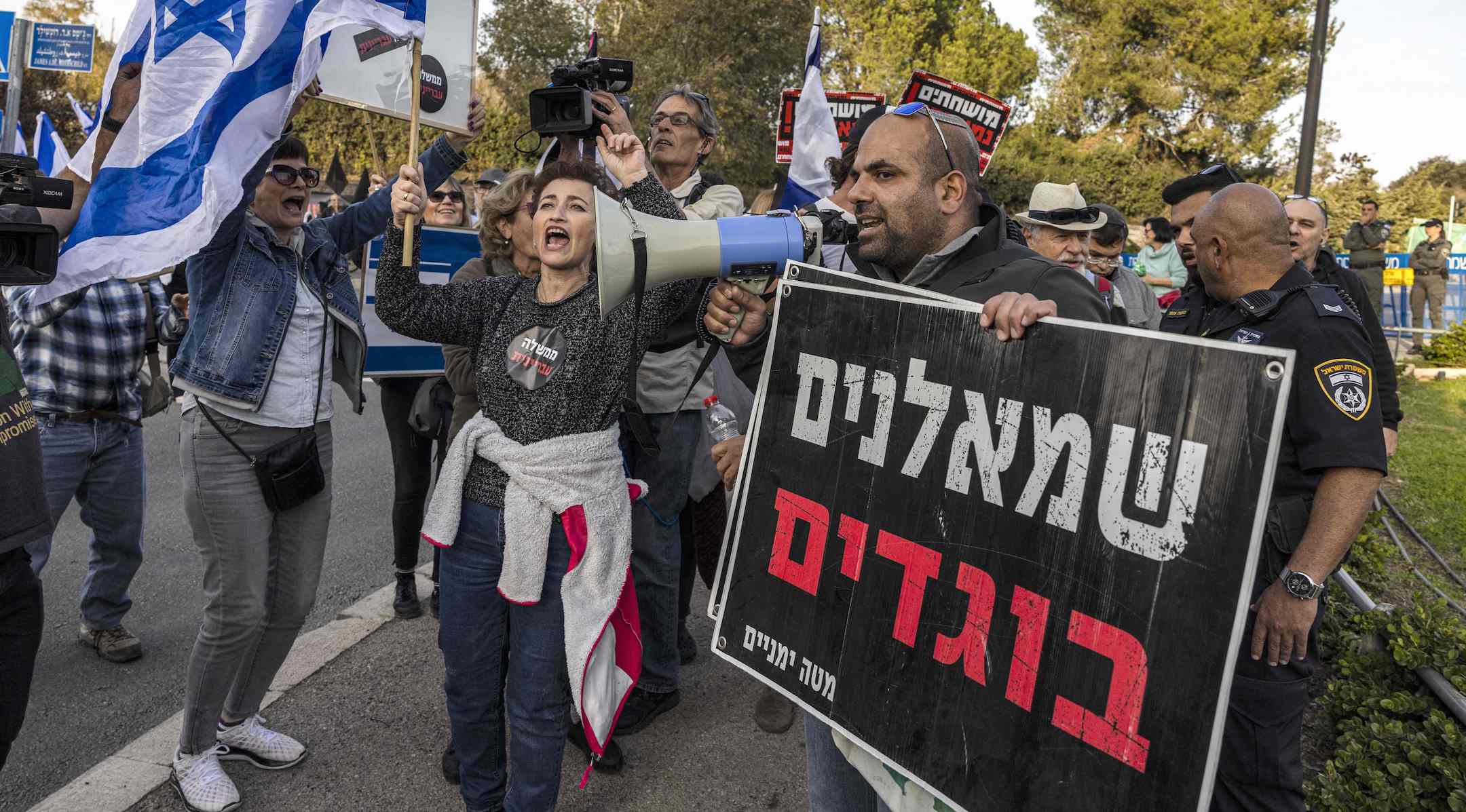 A right-wing activist, carrying a sign that reads "leftist traitors," confronts left-wing activists at an anti-government demonstration near the Knesset in Jerusalem, Dec. 12, 2022. (MENAHEM KAHANA/AFP via Getty Images)
Advertisement

(JTA) — Speaking to the media in the United States before and after his latest election as Israel’s prime minister, Benjamin Netanyahu reassured American Jews and other supporters of Israel that their widely expressed fears of the undemocratic nature of the new Israeli governing coalition were overblown and would not in fact come to pass.

Netanyahu told the New York Times that he was still at least notionally committed to a peace deal with the Palestinians and told journalist Bari Weiss that policy would be determined by him, and not cabinet ministers like the self-described “proud homophobe” Bezalel Smotrich and convicted criminal Itamar Ben-Gvir, or the haredi Orthodox parties.

Then he returned to Israel, and promptly tweeted, “These are the basic lines of the national government headed by me: The Jewish people have an exclusive and indisputable right to all areas of the Land of Israel. The government will promote and develop settlement in all parts of the Land of Israel — in the Galilee, the Negev, the Golan, Judea and Samaria.” Netanyahu was asserting absolute Jewish sovereignty over the entirety of the West Bank, with no room for Palestinian statehood — as those politicians want and as his many American Jewish critics feared he would do.

That last tweet, despite reflecting the official position of Netanyahu’s newly inaugurated government, did not attract nearly as much attention in U.S. media as Netanyahu’s previous press tour. Because unlike Netanyahu’s fluent English-language interviews with numerous American press organizations, this tweet was in Hebrew — a language in which only 22% of American Jews possess an even minimal degree of fluency.

Like many non-Orthodox American Jews, I was once one of those other 78%. I was brought up attending a Reform synagogue, and I learned how to read enough Hebrew phonetically to have a bar mitzvah ceremony, reciting my Torah portion by rote memorization. I learned the aleph bet, and a few basic words here and there, but not much more. If I read Torah or Talmud at all, it was entirely in English translation.

But unlike many non-Orthodox American Jews, I became interested in learning Hebrew as an adult, as part of a broader interest in learning more about Jewish history, and I enrolled in courses starting in college to study Biblical, Mishnaic and modern Hebrew. Eventually, after years of study, I enrolled in a doctoral program in Jewish history at the University of Chicago, where I had to pass a rigorous Hebrew proficiency exam as a prerequisite to advance to doctoral candidacy status.

In many ways, this should have made me an ideal American Jew. After all, numerous commentators have opined on the need for more American Jews to learn Hebrew, to bring us closer to both Israeli Jewish culture and to Jewish history as a whole. As one Israeli educator stated, “Once you have Hebrew, all Israeli culture can be injected into your life.”

A wide array of American Jewish philanthropists and charities have identified funding Hebrew language education for American Jews as a priority. They should see someone like me — who went from knowing barely enough Hebrew to get through my bar mitzvah to now reading Haaretz each day in Hebrew — as a success story.

Except that this call for more American Jews to learn Hebrew often comes with an embedded political assumption: that if more American Jews learned to read and speak Hebrew, we would feel more closely linked to Israel and reverse the declining support for Israel among young American Jews.

There’s even a claim that American Jews do not have the right to criticize Israel without being able to follow Israeli political discussions in the original language. Daniel Gordis, of Shalem College in Jerusalem, complained that left-wing American Jewish journalist Peter Beinart should not be taken seriously as a commentator on Israeli affairs, as Beinart apparently “cannot read those [Hebrew] newspapers or Israeli literature until it is translated.”

The assumption is clear: If American Jews do not know Hebrew, we cannot be connected to the state of Israel, nor can we truly understand the Israeli politics we might wish to opine about. If we learned Hebrew, one Israeli-American advocate wrote, we would “be more united and support Israel in spectacular ways.”

Except that in my case, the exact opposite happened. As I learned more Hebrew, I saw how Israeli Jewish politicians often spoke in different terms in English and in Hebrew, tailoring their appeals for different audiences. Netanyahu’s recent sojourn to the United States is only one example. Take Ayelet Shaked, who sounded moderate notes to English-speaking audiences on a trip to Britain, while also telling Hebrew audiences that the “Jewish” character of Israel should supersede the notion of “equality.”

Of course, there’s nothing inherently wrong with code-switching. Politicians of all kinds do that. But the fact that some Israeli politicians think they have to sound more moderate in English than in Hebrew is telling. And when I opened myself up to what some Israeli politicians say in Hebrew, such as when Netanyahu falsely spread allegations of Arabs stealing votes in the last Israeli elections, something he did in Hebrew and not in English, or when new coalition partner Itamar Ben-Gvir put up a billboard reading, “May our enemies be gone” in Hebrew next to the pictures of three Israeli left-wing politicians, two Palestinian and one Jewish, it opened my eyes to a lot of aspects of Israeli politics that some American Jews would rather not hear.

But we should be honest about what the effects of that Hebrew language education would be. It might not be to simply make more American Jews “defend Israel” against its detractors. It might mean a more honest engagement with Israeli politics as they truly are, rather than how they are presented abroad to English-speaking audiences. And for some of us, that might even push us further away.

Joel Swanson
is a doctoral candidate at the University of Chicago, where he studies and teaches undergraduate courses on modern Jewish intellectual history. He is working on a dissertation on Jewish alienation in early 20th-century France. He teaches, speaks and writes widely on Jewish history and politics, for both academic and journalistic sources.
The views and opinions expressed in this article are those of the author and do not necessarily reflect the views of JTA or its parent company, 70 Faces Media.