Orthodox Child with Rare Ailment is Rescued Aboard Tycoon’s Jet 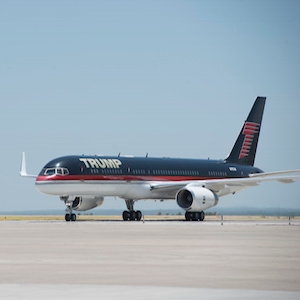 The child, Andrew Ten, age 3, arrived with his parents — accompanied by three nurses who attend to him around the clock — to try to seek medical help in the New York area.

Trump made his plane available for the special trip to New York after the boy’s parents, Judy and Harold Ten, called Trump and told him of their plight.

Commercial airlines refused to fly the child because he could not travel without an elaborate life-support system, which includes a portable oxygen tank, a suction machine, a breathing bag and an adrenaline syringe.

“Mr. Trump did not hesitate when we called him up. He said ‘yes, I’ll send my plane out,'” 29-year-old Harold Ten recalled shortly after he landed here Tuesday morning.

Asked why he thought Trump made his private jet available, Ten replied, “Because he is a good man. He has three children of his own and he knows what being a parent is all about.”

Ten said he believes that Trump fulfilled the Talmudic saying that “he who saves one person’s life is as if he saved the entire world.”

Among the relatives at the airport to greet the child and his parents were the paternal grandparents of the sick boy.

“Donald Trump is a miracle, just a miracle,” said grandmother Feigy Ten, who came to the airport with her husband, Phillip Ten.

Both grandparents thanked Trump’s generosity over and over again.

Andrew, who is called by his Hebrew name, Avraham Moshe, was taken from the airport to the Schneider Children’s Hospital of Long Island Jewish Medical Center for treatment and evaluation.

Andrew was healthy at birth, but one morning when he was 10 months old he suddenly stopped breathing. The second incident occurred six months later. Doctors had no explanation and to date have not determined what is causing him to stop breathing.

Andrew has not cried in the last two-and-a-half years. He now eats with a feeding tube since he lost his gag reflex and the ability to swallow. He is monitored around the clock by nurses, and sleeps with an apnea alarm.

Harold Ten said he and his family “are determined to do anything possible to save Andrew. We believe in God and we have hope,” he said.