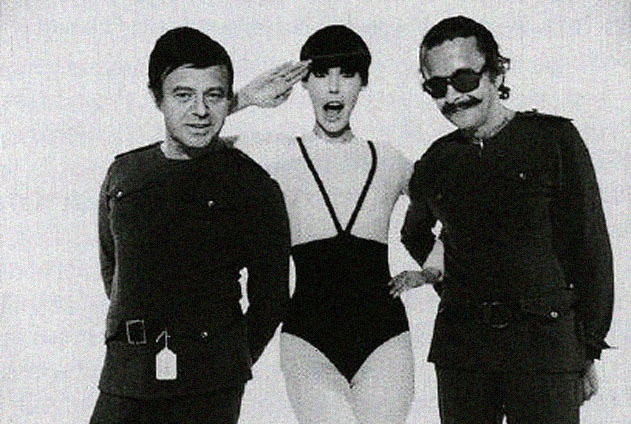 It can’t be said that the Nazis launched many fashion careers, but when, after the Anschluss, Hitler banned nudity in buff-loving Austria, a young Rudi Gernreich may have taken note. Gernreich, who would become famous as the inventor of the monokini—not the one-piece with cutouts we know today, but a topless suit held up by a halter strap—escaped Austria with his mother in 1938, and moved to Los Angeles. He would later become known as a designer who “freed the body.”

Gernreich’s anatomy lessons continued when one of his first jobs was cleaning bodies before autopsy at a morgue. By the time he came into his own as a designer, he was known for removing unnecessary or uncomfortable parts of clothing (like the boning in bras—one of his designs was the “No Bra.”) He also played a role in futuristic fashion, even designing costumes for a British sci-fi show.

Futuristic though they were, not all of Gernreich’s designs turned into fashion predictions. For instance, in 1962, Gernreich, who was gay, believed that by the end of the decade, women would stop covering their breasts. Although today, most bosoms remain hidden, the (reinterpreted) monokini remains a head-turning beach option. Thanks, Rudi.

The Kugel That Was Really a Rebbe

The Painter Charlotte Salomon Killed Her Grandfather. Then the Nazis Killed Her.