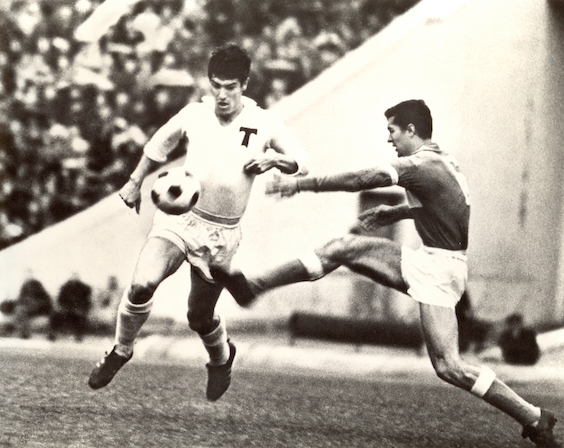 In the 1960s, a group of Israeli expats and European concentration camp survivors formed Maccabi Los Angeles, part of the largely ethnic Greater Los Angeles Soccer League. As a recent article in Vice recounts, over the course of a decade Maccabi became one of the top U.S. soccer teams, and only one of two teams along with Bethlehem Steel to win five National Challenge Cups (now known as the U.S. Open Cup).

They practiced on Sundays at Jackie Robinson Stadium in West L.A. While they bore some anti-Semitic slurs on the field, not all the players were Jewish. One, German actor Eric Braeden, played Nazi Captain Hans Dietrich on ABC’s The Rat Patrol when he wasn’t wearing the team’s blue-and-white jersey with a Star of David logo.

Maccabi won the Triple Crown twice in 1977, and the National Soccer League Title and California State Cup in 1978. They beat Bridgeport Vasco da Gama from Connecticut in the 1978 National Challenge Cup Final in New Jersey in front of a crowd of over 30,000 people. The team broke up in 1982 and shifted their focus to youth programs, but some of the now-aged players still meet for dinner on Tuesday nights at Il Forno in Santa Monica.