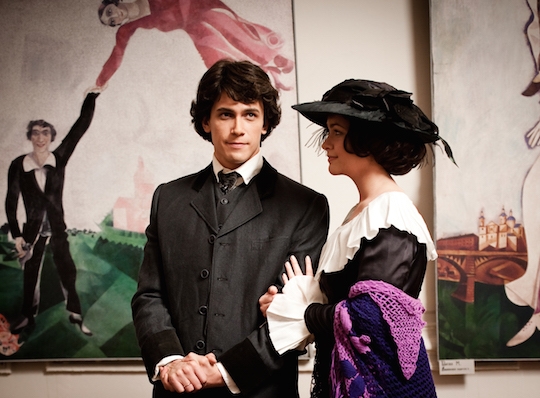 Marc Chagall’s fraught, fantastic life began at birth. With his Russian village of Vitebsk burning around her, his mother pushes and shrieks. Baby Marc is pronounced stillborn. But his mother insists he can be revived. He’s dunked in buckets of hot and cold water and – ta da! – his tiny cries ring out.

A lot of the new film Chagall-Malevich, exudes this kind of magical realism – weaving together chaos and beauty, destruction and rebirth, fact and fiction. The celebrated painter – played by Leonid Bichevin – is like a charmed pied piper, leading his students and devotees through romps in the fields. Every stroke of his brush becomes instantaneously genius, the stars fly up and dance around him, and women swoon in love.

He’s come back to Vitebsk to marry the love of his life, Bella (Kristina Schneidermann). There he opens the Academy of Modern Art and invites abstract artist Kazimir Malevich (Anatoliy Belyy) to teach. Malevich seems convinced he can transform the cosmos through art, and the two get into a huge fight while the October Revolution tears Vitebsk apart.

The director, Alexander Mitta, writes: “My film represents the struggle of these ideas in a tangle of emotions and desires at the moment when life is worth nothing and Art means everything.”

Heavy with metaphor and color, Chagall-Malevich feels a lot like a Chagall painting – altering reality, and taking flight.

Check here for screenings near you.