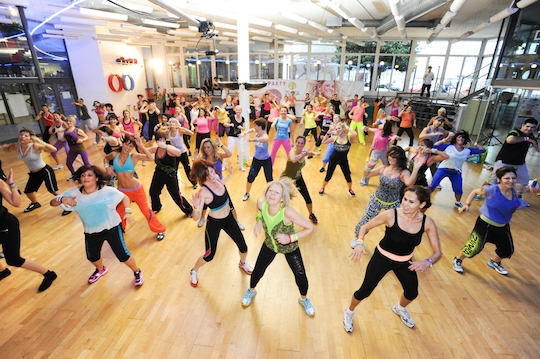 One day in the mid-1990s, dancer and choreographer Alberto “Beto” Pérez forgot his usual music for the aerobics class he taught in Bogotá, Colombia. In a pinch, he reached for his favorite salsa tape and taught the class like a dance party. He and his students had so much fun that he gave it a name— “rumba”—and began teaching it all the time.

A few years later, Pérez had moved to Miami, and got a call from Alberto Perlman, the son of one of his old Bogatá students. Enamored of both her rumba teacher and her son, Perlman’s mom, Raquel, thought the two of them should get together and start a business. So the two Colombian emigres met at a Starbucks and talked about their big idea: They launched Zumba, changing the name from rumba, which means “party” in Spanish.

Zumba is now in 180 countries around the world with 200,000 locations and provides an array of specialty classes: Zumba for kids, Zumba for grandmothers, Zumba with weights and even Zumba for observant Jewish women with more modest music and dress code. All this thanks to one dance-loving Jewish mother.

Knees up for Raquel!