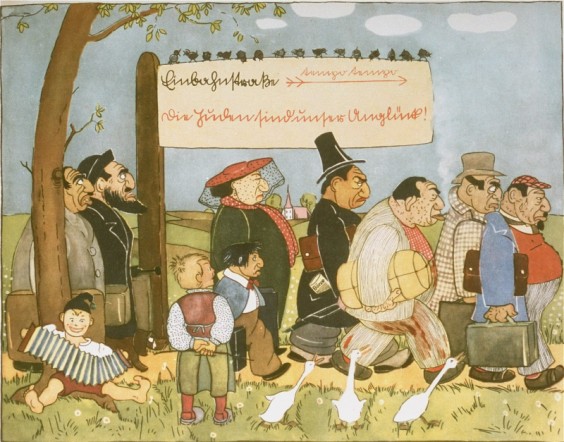 How did Adolf Hitler’s anti-Semitic ideas transform from the ravings of an outsider to official policy? A recent exhibit at the New-York Historical Society,“Anti-Semitism 1919-1939,” asked this question, and a 1936 children’s book supposedly about a fox ventures an answer.

Trust No Fox was one of three children’s books published by the Nazi weekly Der Stuermer in the 1930s. Written and illustrated by Elvira Bauer, 100,000 free copies were distributed to schools. The colorful images depict Jews as short and shifty, Germans are tall, blond, and hardworking. These reflect the same stereotypes that are on display throughout the exhibit, but unlike the others, these caricatures are explicitly aimed at children.

The Jew, with his briefcase and fancy clothing, is depicted as an unhealthy urbanite who leeches off of the German who works the land. There’s no plot, but the book warns children away from cunning Jews: “Now, children, keep a good look out/Whenever you see a Jew about./The Jew creeps round, a regular fox,/Keep your eyes open, or you’ll be on the rocks.

Together with objects like ashtrays with anti-Semitic caricatures and signs marking areas as off-limits to Jews, Trust No Fox demonstrates the pervasiveness of virulent anti-Semitism in the everyday life of both children and adults in 1930s Germany.