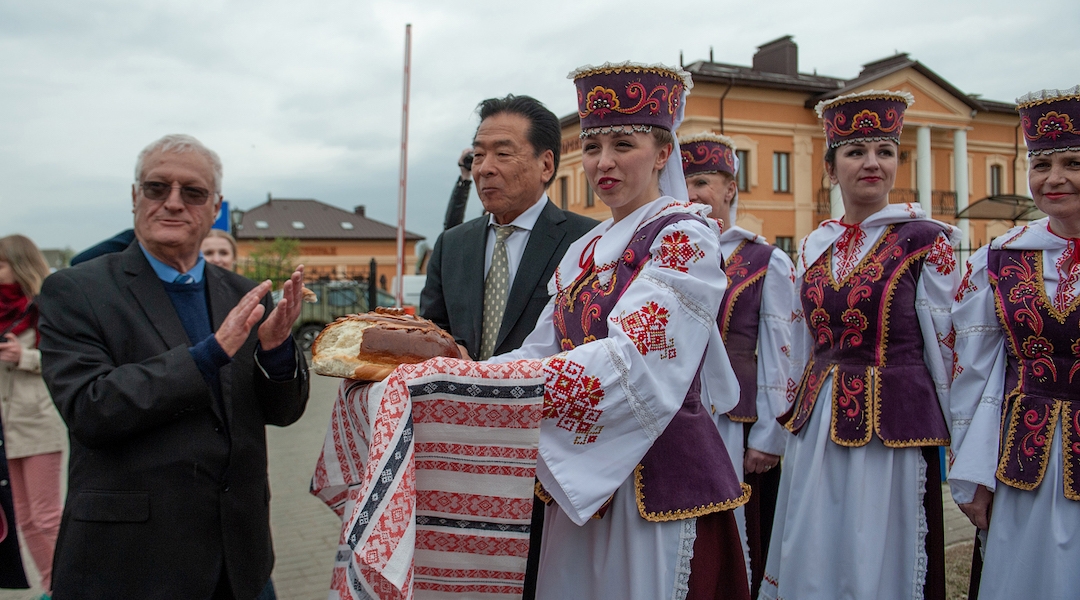 MIR, Belarus (JTA) — For the first time in decades, a Holocaust commemoration event was held in this town, once one of Europe’s main hubs of Jewish learning.

Attending the event in Mir, a town of some 2,000 residents southwest of Minsk, was Nobuki Sugihara, the son of Japan’s only Holocaust-era savior of Jews, Chiune Sugihara. The Limmud FSU Jewish learning organization invited Nobuki Sugihara and hundreds of Belarus Jews to the ceremony at the former yeshiva, whose students Chiune Sugihara saved.

Now a post office, the Mir yeshiva, or religious seminary, was one of Europe’s best-known and most prestigious institutions of its kind. In 1940, after the yeshiva relocated to Vilna, Chiune Sugihara, then Japan’s consul in Lithuania, gave life-saving transit visas to the yeshiva’s 700 students and more than 2,000 additional Jews against the orders of his superiors.

The visas, along with another visa provided to the refugees by the Dutch consul Jan Zwartendijk, allowed the asylum seekers to survive the Holocaust and flee the Nazis. Mir was one of a handful of famous yeshivas in Europe whose student body was almost entirely saved. Branches of the yeshiva were established in New York and Jerusalem.

“He knew they had nowhere to go, and that no one else was going to help them to survive,” Nobuki Sugihara said of his father in a speech at the event. Chiune Sugihara’s career was stunted in Japan, an ally of Nazi Germany, and he quit the Foreign Ministry in 1947.

In a departure from the solemn character of previous Holocaust commemoration events held by Limmud FSU, the organization’s founder, Chaim Chesler, and some of the 600 Belarus Jews attending the event this weekend danced in Mir to the sounds of a local band in celebration of the lives saved by Sugihara.

“Sugihara is a symbol of courage and resourcefulness,” Chesler said.

The band and female dancers wore traditional clothes, and the mayor declared the day of the event a holiday in honor of the visitors.