A Swedish political party says it will fight to ban circumcision 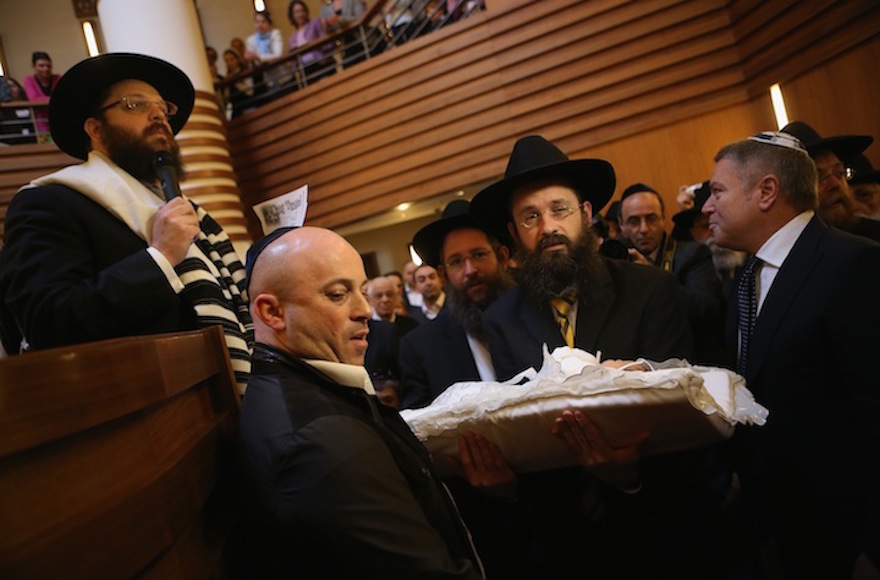 An infant being carried before his circumcision at an Orthodox synagogue in Berlin in 2013. (Sean Gallup/Getty Images)
Advertisement

(JTA) — A Swedish political party has voted to change its official stance in favor of banning circumcision.

The Swedish Center Party voted 314-166 at its annual meeting to work to fight the nonmedical circumcision of boys. Party chief Annie Loof was among the party leaders who criticized the vote.

The Center Party received approximately 8 percent of the votes in last year’s national election, earning 31 seats in the 349-seat parliament. It broke with its center-right alliance earlier this year and now backs the left-wing ruling coalition, though it’s not officially part of the bloc.

The vote Saturday drew fierce debate in the country between advocates, who say circumcision infringes on children’s rights, and critics, who say a ban would threaten the country’s Jewish and Muslim populations.

“A ban on circumcision would make Jewish life in Sweden impossible,” Aron Verständig, chairman of The Official Council of Swedish Jewish Communities, said Sunday in a statement.

According to Swedish law, circumcision can be performed only by medical practitioners or those licensed by the country’s Health and Welfare Board.

Sweden’s Jewish community numbers about 20,000 and has faced a range of challenges in recent years — from the rise of anti-Semitism that at times has turned violent to policy proposals that community members say make their lives difficult or impossible.