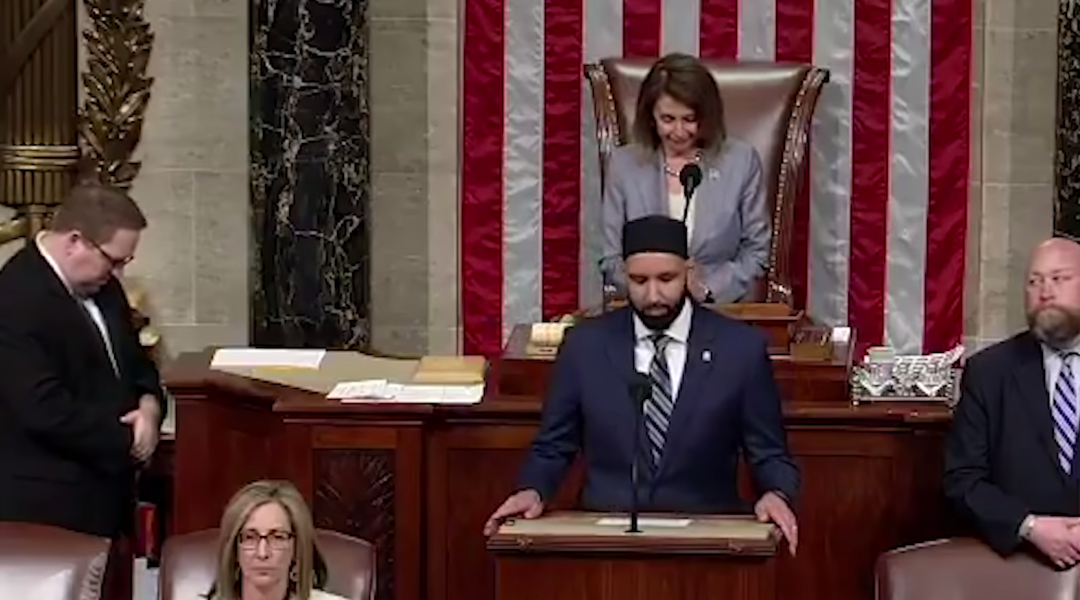 Omar Suleiman giving an opening prayer for a session of the House of Representatives, May 9, 2019. (Screenshot from YouTube)
Advertisement

WASHINGTON (JTA) — An imam who has wished for the end of Zionism, called for a third Intifada and likened Israel to Nazi-era Germany delivered the opening prayer for a session of the U.S. House of Representatives on Thursday.

Omar Suleiman, the founder and president of the Dallas-based Yaqeen Institute, an organization that describes itself as a resource about Islam, referred to recent attacks on houses of worship — which has included synagogues in the United States — in his opening remarks.

“Let us not be deterred by the hatred that has claimed the lives of innocent worshippers across the world, but emboldened by the love that gathered them together to remember you and gathered us together to remember them,” Suleiman said in a short prayer after being introduced by Speaker Nancy Pelosi, D-Calif.

Suleiman has a long record of incendiary social media statements about Israel, as compiled two years ago by Petra Marquardt-Bigman, a researcher, and posted on the Algeimeiner Jewish news site. He has on multiple occasions wished for a third Palestinian Intifada, or uprising, likened Israeli troops to Nazis, and has wished for the end of Zionism, calling Zionists “the enemies of God.” He is a backer of the boycott Israel movement.

Suleiman’s congresswoman, Rep. Eddie Bernice Johnson, D-Texas, invited him to deliver the prayer through a standard form on the webpage of the Office of the Chaplain of the House, according to a congressional official.

Pelosi’s office is looking into how and why Johnson invited Suleiman, an official told The Jewish Telegraphic Agency.

Rep. Lee Zeldin, R-N.Y., who is Jewish, said in a statement that inviting Suleiman to deliver the opening prayer was a “terribly bad call.”

Suleiman in 2016 was at the scene of an anti-police shooting, in which five policemen were slain. He delivered a prayer at a memorial service a week later appearing on a stage with Texas’ two Republican senators, Ted Cruz and John Cornyn, then-President Barack Obama and former President George W. Bush.

Farrakhan speaks of ‘satanic Jews’ in talk at Catholic church