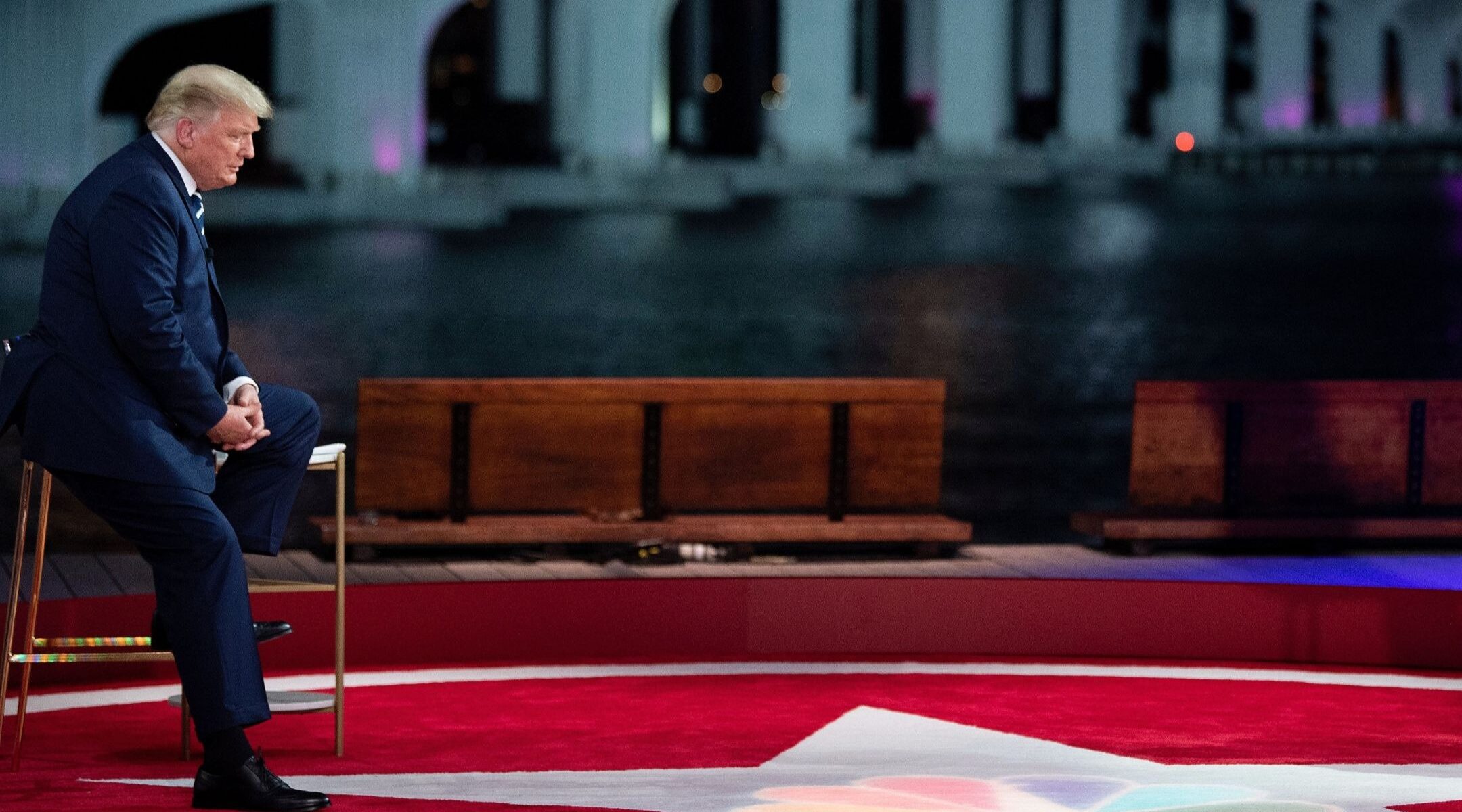 President Donald Trump looks on during a break in an NBC News town hall event at the Perez Art Museum in Miami, Oct. 15, 2020. (Brendan Smialowski /AFP via Getty Images)
Advertisement

(JTA) — Under fire for his past equivocations on white supremacy, President Donald Trump denounced the phenomenon in a town hall but claimed to be ignorant of QAnon.

“I denounce white supremacy,” Trump said Thursday in an exchange with the NBC moderator, Savannah Guthrie. “What’s your next question?”

Trump showed exasperation at the question, saying he has denounced the phenomenon multiple times. Guthrie said he had in the past “hesitated,” noting that in his debate two weeks ago with Democratic nominee Joe Biden, he told an extremist right-wing group, the Proud Boys, to “stand back and stand by” when he was asked to denounce white supremacists.

“You always start off with that question, you didn’t ask Joe Biden whether or not he denounces Antifa,” Trump said, referring to a loosely affiliated movement of left-wing groups that sometimes use violence.

Trump declined however to denounce QAnon, a movement that peddles a conspiracy theory that accuses Democrats of running pedophile rings and sees Trump as a secret savior. In some iterations, QAnon enthusiasts advance anti-Semitic slanders.

“I hate to say that I know nothing about it,” Trump said. “I do know they are very much against pedophilia.”

Guthrie pressed Trump, describing the group’s delusions. Trump would not accept her description.

“What I do hear about it, is they are very strongly against pedophilia, and I agree with that,” Trump said.

Trump was to have debated Biden on Thursday but pulled out when the debate commission changed the format to a virtual debate after Trump contracted the coronavirus.

One of Biden’s questioners, a Trump voter named Mark Hoffman, asked Biden why he would not praise Trump’s foreign policy successes, including the recent normalization agreements between Israel and the United Arab Emirates and Bahrain, which Hoffman called a “modern miracle.”

Biden said Trump’s foreign policy was diminishing America’s profile. “We’re more isolated in the world than we have ever been,” Biden said, but added: “I do compliment the President on the deal with Israel recently. But, you know, if you take a look, we’re not very well trusted around the world.”