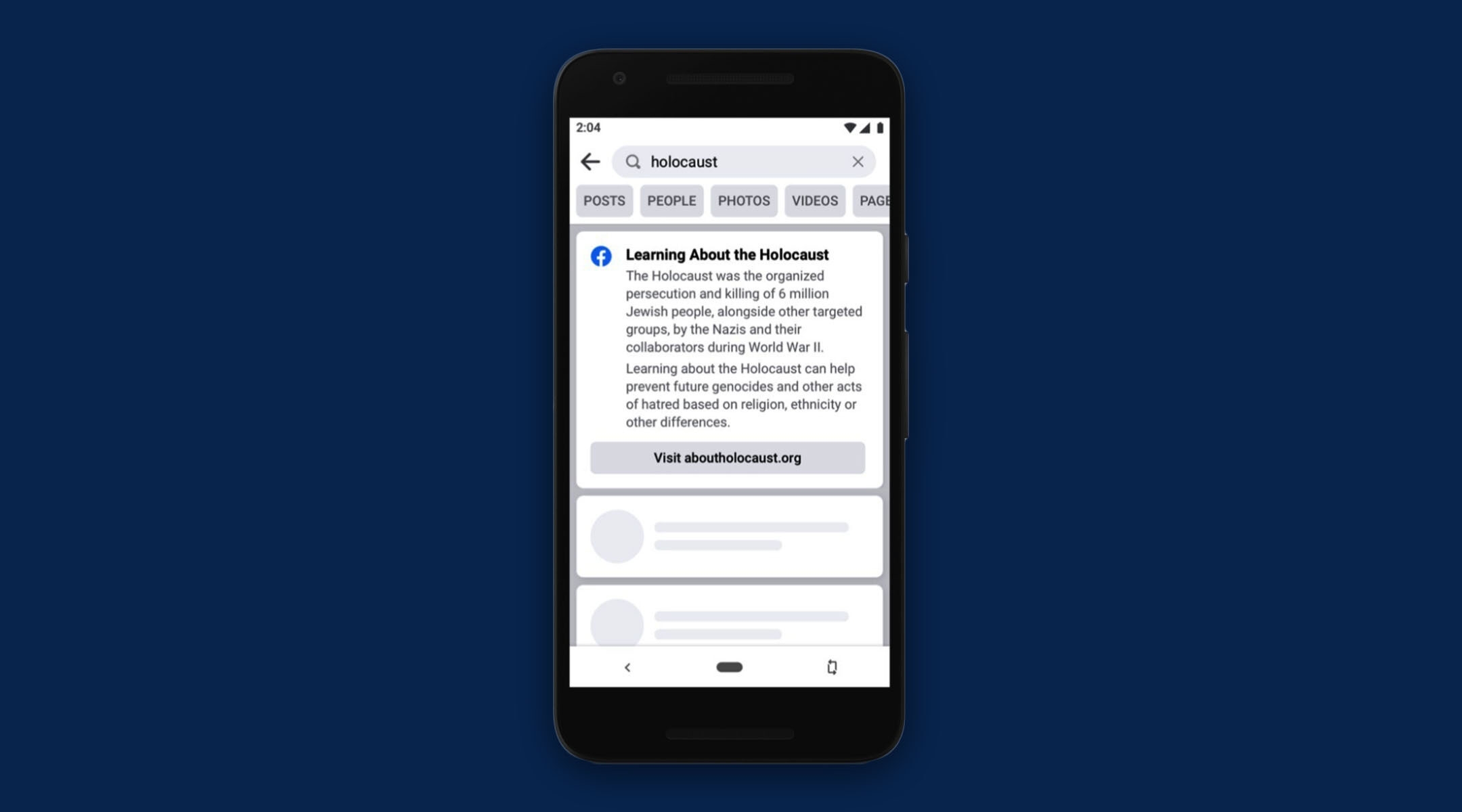 (JTA) — People who search for information about the Holocaust on Facebook will now be prompted to visit a website on the genocide curated by the World Jewish Congress and UNESCO, the United Nations Educational, Scientific and Cultural Organization.

Starting Wednesday, which is International Holocaust Remembrance Day, users will see a box labeled “Learning About the Holocaust” when they search Holocaust terms. Similar boxes with resources pop up after searching about things such as the COVID-19 pandemic and U.S. elections.

“The Holocaust was the organized persecution and killing of 6 million Jewish people, alongside other targeted groups, by the Nazis and their collaborators during World War II,” the box reads. “Learning about the Holocaust can help prevent future genocides and other acts of hatred based on religion, ethnicity or other differences.”

There is a link to aboutholocaust.org, a joint WJC and UNESCO site.

WJC President Ronald Lauder said the new tool could help counter Holocaust ignorance among the young. A study last fall on Gen Z views on the genocide found a widespread lack of subject on the subject — 11% of respondents thought that Jews caused the Holocaust.

“It is saddening and disconcerting that 75 years after the end of World War II, roughly 50 percent of the world does not even know that the Holocaust occurred, or that Jews were targeted for genocide in Europe,” Lauder said in a statement.

Another factor spurring the prompt is the proliferation of hate speech on social media. Facebook has come under fire in recent years for not adequately stemming hate speech, incitement and disinformation. Last July, a campaign sponsored by the Conference on Jewish Material Claims Against Germany produced videos of Holocaust survivors urging Facebook CEO Mark Zuckerberg to take forceful steps to erase Holocaust denial content from the site.

“At a time of rising hate and intolerance, taking time to read and reflect on what happened to Jews and others in Europe is more important than ever,” said Facebook COO Sheryl Sandberg, who is Jewish, in a news release.

Monica Bickert, Facebook’s vice president of content policy, spoke Wednesday on a panel jointly organized by The Paley Center for Media and the Claims Conference, entitled “The Media’s Role in Combating Holocaust Denial, Misinformation and Anti-Semitism.”

“We’re thinking not just about removing hateful content; we are now removing anything that denies or distorts the Holocaust,” Bickert said on the panel, whose speakers also included Holocaust survivor Eva Schloss and Sara Bloomfield, the director of the U.S. Holocaust Memorial Museum. “A really important part is using technology. We need to make sure we are harnessing the very positive power of social media to educate.”