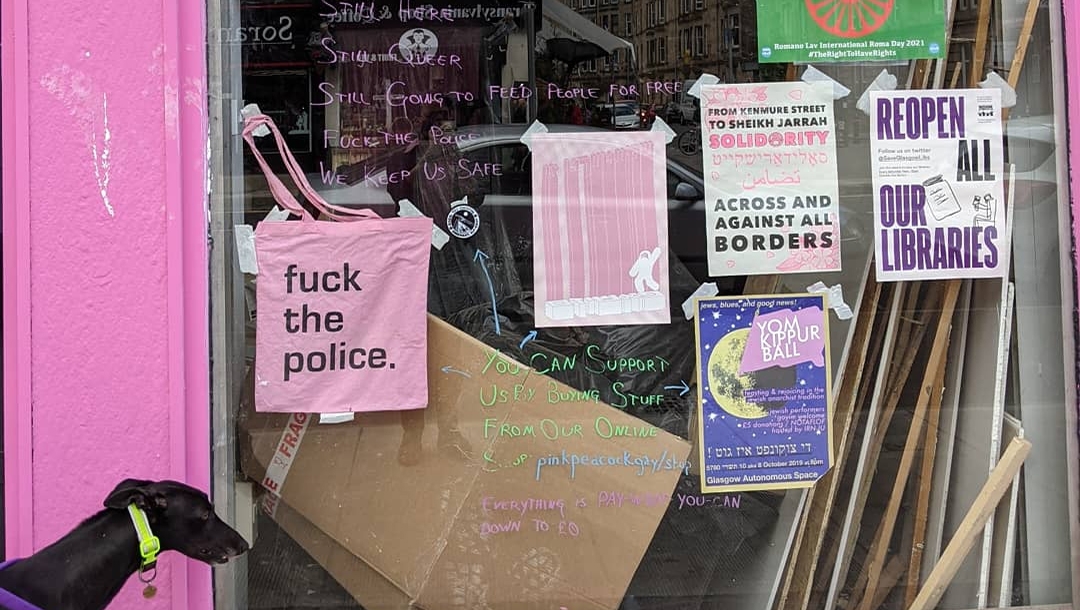 (JTA) — The Jewish owners of a cafe in Scotland decided to use their shop display to advertise their views on law enforcement.

For months, a bag emblazoned with the words “f— the police” decorated the facade of The Pink Peacock in Glasgow, a hub for Jewish activists with an affinity for Yiddish and far-left causes, including anarchism.

It also features a Palestinian flag and the slogan “Jews and Queers for a Free Palestine” and a poster promoting a Yom Kippur Ball, a party that the owners threw in 2019 on the Jewish Day of Atonement because it’s “feasting and rejoicing in the Jewish anarchist tradition,” as the poster states.

On Monday, police in Glasgow addressed at least one provocative item: They confiscated the bag and charged one of the owners, 32-year-old Morgan Holleb, of committing a breach of the peace – a criminal offense in that part of the United Kingdom.

Two police officers seized the bag, calling it evidence, as Joe Isaac, another founder of The Pink Peacock, filmed the incident.

On Twitter, the founders wrote that the incident was “an obvious attempt to intimidate us” — and it “won’t work.”

A police spokesperson told the Jewish Telegraphic Agency on Wednesday that the police were there following complaints by residents.

In the video filmed by Isaac, Holleb is seen replacing the English-language tote bag with another in Yiddish. It reads “daloy polizei,” which means “down with the police.”

The officers didn’t seem to mind the Yiddish-language bag.