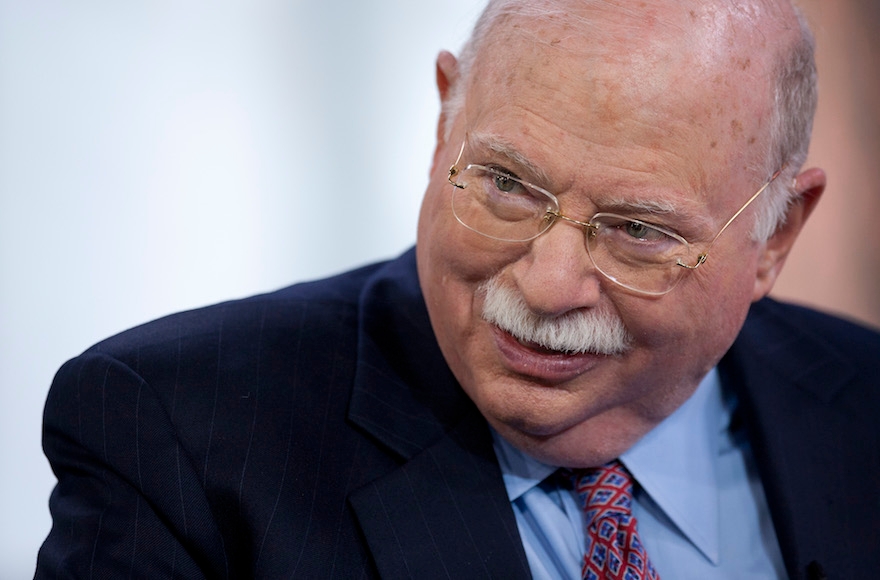 (JTA) — Michael Steinhardt’s family and foundations responded to a New York Times article alleging a pattern of sexual harassment by the billionaire Jewish philanthropist, saying remarks that women said made them feel debased were made in “jest.”

Seven women in Wednesday’s article, a joint investigation by The Times and ProPublica, alleged that the co-founder of Birthright Israel propositioned women or made inappropriate sexual remarks while the women were dealing with him in a professional capacity.

The article “goes out of its way to leave the false impression that Michael propositioned a handful of women,” according to a statement signed by Steinhardt’s son David and lay and professional leaders of his two main philanthropies. “He, of course, did no such thing. Nor does the article actually claim that he ever tried to have sex with anyone. But the innuendo and purposeful distortions are clearly designed to harm Michael and mislead readers.”

The statement acknowledges that “Michael’s sense of humor can be insensitive, and he has apologized for the unintended bad feelings his remarks have caused. As he said months ago: ‘I am sorry and deeply regret causing any embarrassment, discomfort or pain which was never my intention.’

“To characterize provocative remarks made in jest and in group settings as actual propositions intentionally distorts the context as well as Michael’s intent — in order to fabricate something that never happened,” the statement continues.

It also includes a statement from Steinhardt saying that “I hope my inappropriate banter, which was always meant in a lighthearted way, does not now become twisted into being something it is not.”

“He set a horrifying standard of what women who work in the Jewish community were expected to endure,” said the rabbi, Rachel Sabath Beit-Halachmi, now a professor of Jewish thought and director of admissions at the Hebrew Union College-Jewish Institute of Religion in Cincinnati.

A former president of The Steinhardt Foundation for Jewish Life, Rabbi Irving “Yitz” Greenberg, is quoted in the article saying that he frequently rebuked Steinhardt for making inappropriate comments, and said he left the organization in 2007 in part due to the tension over Steinhardt’s behavior.

The statement from Steinhardt appears to be referring to Greenberg’s version of his departure when it says,  “A former employee who was terminated now provides a false claim about the circumstances of his departure.”

“Michael is an equal-opportunity teaser — teasing men and women alike,” the statement asserts. “The reporters apparently overlooked this fact because teasing men and women, alike, doesn’t make for a great story. [We are] evaluating our legal options over this intentionally defamatory article and will keep you updated.”

Gedzelman is a member of the board of directors of 70 Faces Media, the Jewish Telegraphic Agency’s parent company.