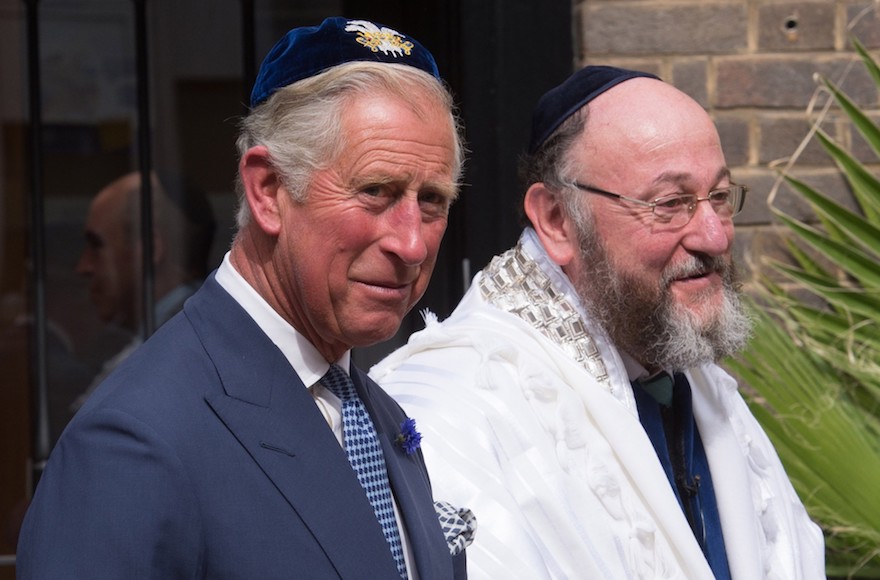 Prince Charles following Rabbi Ephraim Mirvis' induction ceremony as the chief rabbi of the United Hebrew Congregations of the UK and the Commonwealth at the St John's Wood Synagogue in London, Sept. 1, 2013. (Stefan Rousseau/Pool/Getty Images)
Advertisement

JERUSALEM (JTA) — Prince Charles, heir to the British throne, will visit Israel for the first time in an official capacity next month in order to attend the upcoming World Holocaust Forum at Yad Vashem.

According to The Jewish Chronicle, the British royal will “undertake a number of engagements on behalf of the British Government,” including a meeting with Palestinian Authority President Mahmoud Abbas. Although he had previously visited Israel to attend the funerals of Prime Minister Yitzhak Rabin and President Shimon Peres, he had never come in an “official” capacity.

Until last year, when Charles’ son Prince William arrived on a state visit, no senior member of the Royal House had visited Israel in their official capacity. Many believed this was due to a policy adopted following the Zionist movement’s use of violence against British nationals when the United Kingdom ruled the Mandate on Palestine – an area comprising modern-day Israel, Jordan and the Palestinian Authority.

The issues of anti-Semitism and British-Israeli relations had loomed large in the minds of British Jews during the recent general election in which Labour leader Jeremy Corbyn challenged incumbent Boris Johnson for the premiership.

Corbyn, a fierce critic of Israel, had promised to recognize Palestine and cease arms sales to Israel if elected. However, Johnson’s Conservatives handily defeated Labour in Thursday’s election, gaining 365 of the 650 seats in Parliament to some 202 for Labour.

Under Corbyn, anti-Israel and anti-Semitic attitudes have proliferated in Labour ranks, placing the party under scrutiny in the Parliament, the media and in a probe by the Equality and Human Rights Commission, a government watchdog.