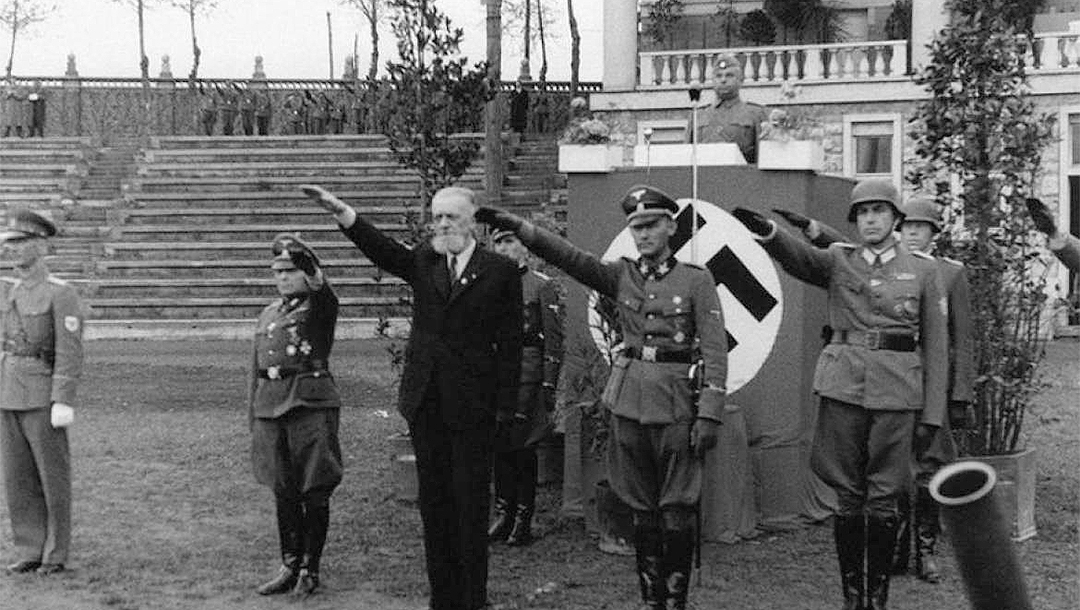 Leon Rupnik, wearing a suit, gives the Nazi salute with German soldiers in Slovenia sometime between 1943 and 1945. (Archives of the Republic of Slovenia)
Advertisement

(JTA) — A court in Slovenia voided the treason conviction of a Nazi collaborator who was executed in Yugoslavia shortly after World War II.

The Supreme Court of Slovenia, a European Union member on Italy’s eastern border, nullified the 1946 conviction of Leon Rupnik last week, the director of the Jewish Cultural Center of the capital Ljubljana wrote in a statement. The court ordered a retrial for Rupnik, the Nazis’ puppet ruler for Slovenia.

“We were shocked and deeply concerned to learn about the decision,” the JCC’s director, Robert Waltl, wrote.

The court ruled that Rupnik’s trial by the judiciary under Yugoslavia’s communist rulers was unjust.

Rupnik has inveighed often against Jews, calling on listeners to “do battle with them.”

Rupnik’s police under the leadership of Lovro Hacin, likewise sentenced and executed in 1946 as a war criminal, organized the arrests and deportations of the remaining Slovenian Jews in Ljubljana and its vicinity in the years 1943 and 1944, according to the local Jewish community.

The Simon Wiesenthal Center protested the nullification in a letter sent Tuesday to the country’s ambassador to Israel.

“This shameful decision constitutes a shocking distortion of the history of the Holocaust and a horrific insult to Rupnik’s many victims and their families,” the center’s Eastern Europe director, Efraim Zuroff, wrote Ambassador Andreja Purkart Martinez.