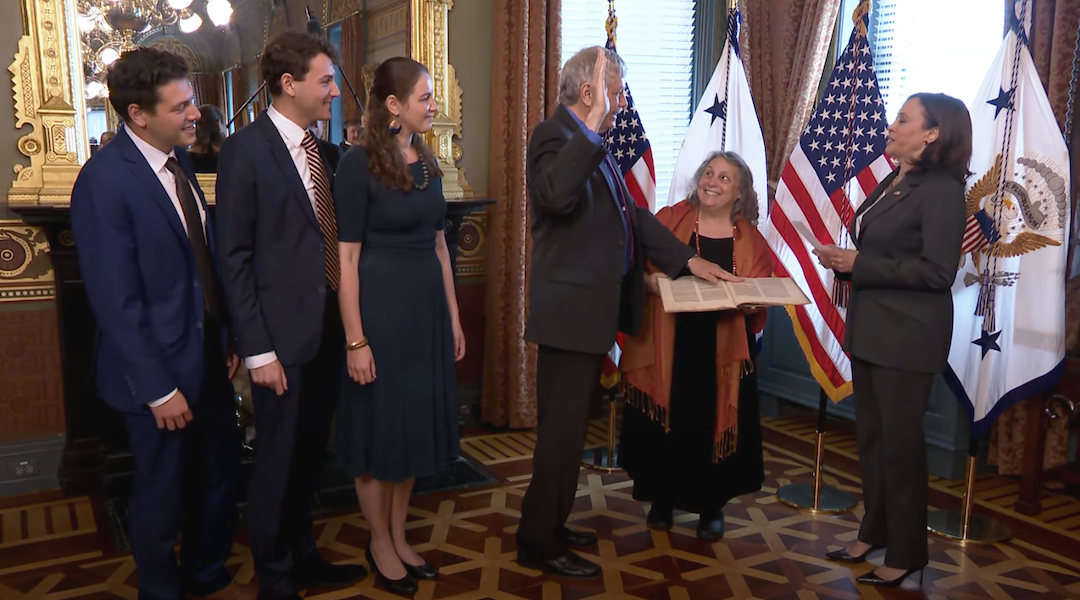 Eric Lander with his family at his swearing-in ceremony with Vice President Kamala Harris, June 2, 2021. (Screenshot from YouTube)
Advertisement

(JTA) — When Eric Lander was sworn in Wednesday as the White House’s first-ever Cabinet-level science advisor, the geneticist also made Jewish history — by taking his oath of office on a 500-year-old copy of a Jewish text filled with ethical precepts.

Lander chose a 1492 edition of Pirkei Avot from the Library of Congress’ holdings after searching for a swearing-in volume that reflected his Jewish and professional values, he told Vice President Kamala Harris at the ceremony.

“It means a lot to me about why we’re all here doing this work,” he said.

The geneticist, who has taken leave from positions at Harvard University and the Massachusetts Institute of Technology, told Religion News Service that he had convened a family meeting to brainstorm books. The family homed in on the Jewish concept of tikkun olam, or “repairing the world,” that has come to represent social justice for many American Jews.

That thought led Lander to the Mishnah, the text compiling early rabbinic discussions of how to apply Jewish law in everyday life. And from there he landed on one section, Pirkei Avot, that contains a precept that he said reflects his personal and professional beliefs: “It’s not required that you complete the work, but neither may you refrain from it.”

The particular volume of Pirkei Avot that Lander identified was published in Naples in 1492, a time when Jews were finding refuge there after being kicked out of Spain during the Inquisition. He said during his ceremony that a researcher only discovered that the text was that old about 1o years ago.

“The world has experimented with intolerance, with the view that everybody has to think like I think, worship like I worship,” Lander told Religion News Service. “(But) the world experimented in 1492 with tolerance — with the idea that we would have a diversity of people and perspectives. I think the lessons of the 1492 era are lessons for today: coming together and making our diversity an incredible asset for this country going forward.”

Lander is not the first official to be sworn in using a unique Jewish text this year. Georgia Sen. Jon Ossoff took his oath of office in January on a Bible owned by the longtime rabbi of his family’s Atlanta synagogue who decades ago forged an alliance between Black and Jewish Georgians.