NEW YORK (JTA) — Another month, another round of recriminations in the Modern Orthodox community.

Two months ago it was a breakaway rabbinic organization established, in part, to promote decentralized conversion standards. Last month it was a public forum on homosexuality in the Orthodox community.

The latest controversy centers on the decision by two rabbis to bestow the title of rabba, a feminized version of rabbi, on a woman previously ordained with the title of Maharat.

Many are making the argument that the time has come to state the inevitable or to admit that which already has occurred: There is no longer a cohesive, singular Modern Orthodoxy. Separate rabbinical schools and separate rabbinic organizations, the argument goes, reflect the reality of a community divided.

Some on the right wing of Modern Orthodoxy would be pleased with such a split. Armed with the “truth” of our tradition and rabbinic authority, they would declare triumphantly that the left’s assault on Orthodoxy was now over as the left wing would now "officially” be relegated to “Conservative Judaism” status. Some on the left also would be validated, as they would finally have “conclusive proof” that the “shift to the right” and its “delegitimizing” have created the need for new institutions that uphold the “true” values of Modern Orthodoxy as opposed to the “haredi-lite” monolithic positions of the right wing of the movement.

However, the big losers in the schism sweepstakes are, or would be, all of Modern Orthodoxy’s adherents, from left to right. The many challenges and opportunities confronting our rich and diverse community are being ignored or overlooked due to the continuous internecine battles. An official split only would exacerbate the problem, with each side claiming to be the true Modern Orthodoxy while projecting itself as the victim of attacks and blaming the other side for the schism. Moreover, it is unclear whether a bifurcation blame game would produce the sociological outcome of two totally separate camps, as many Modern Orthodox Jews defy neat categorization and labels.

Rather than expending all of our time and energy on divisive debates about who is Orthodox and on deciding the extreme “team” to which we belong or identify, we must shift our focus to the center and to substance. Rabbi Aharon Lichtenstein once said that "It is of centrism’s very essence to shy away from simplistic and one-sided approaches, of its very fabric to strive to encompass and encounter reality in its complexity and, with that encounter, to seek the unity which transcends the diversity."

Let’s take the current storm in which the core issue is being drowned out amid the cacophony of controversy. Instead of one side pushing the envelope further on female rabbis by unilaterally announcing another name for female clergy through a news release, and the other side reacting by calling such a move beyond the pale of Orthodoxy and/or scornfully snickering at the title, should we not be discussing how to create halachically and communally accepted positions for female scholars to serve as role models and spiritual, pastoral and educational resources in some of our shuls and communities?

In the past few years, several Modern Orthodox rabbis and their communities have hired qualified women to serve in these substantive capacities, recognizing all that these individuals have to offer their members. A consensus exists among these rabbis and their communities that employing women in these roles is beneficial and halachically desirable, even as each rabbi and community has chosen a different job description and title. We bemoan the dearth of educators and leaders and, especially, female role models in Modern Orthodoxy; let’s encourage our best and brightest to enter these fields and assure them that they will have our support and our respect. Ultimately, Modern Orthodoxy will be much better served by promoting substantive and individualized roles for women across the broad spectrum rather than allowing the extreme camps to set the communal agenda.

Only by setting aside the cycle of labeling and attacks, and engaging in meaningful dialogue with one another will we be able to address this, and other pressing matters, as a mature community. If we collectively propose models and ideas that take into account the variegated and complex social and halakhic realities of our individual and collective communities (that is a lot of ifs, I realize), we will promote enhanced commitment to Modern Orthodox Judaism and its values, as well as foster unity.

Long ago, W. B. Yeats had an apocalyptic vision — a vision that captures the current climate of Modern Orthodoxy in America:

"Things fall apart; the centre cannot hold;
Mere anarchy is loosed upon the world,
The blood-dimmed tide is loosed, and everywhere
The ceremony of innocence is drowned;
The best lack all conviction, while the worst
Are full of passionate intensity."

Our challenge, to paraphrase the great American historian Arthur M. Schlesinger Jr., is to make sure that the vital center holds and grows, as the best hope for our future lies in the widening and deepening of the center of Modern Orthodoxy. We cannot afford to continue letting loose the blood-dimmed tide. Our best, not just our most extreme, must display a sense of conviction with passionate intensity.

(Rabbi Shmuel Hain, spiritual leader of Young Israel Ohab Zedek in Riverdale, N.Y., also serves as the rosh beit midrash of Yeshiva University’s graduate program in biblical and Talmudic interpretation for women. He is the conference chair of Orthodox Forum 2010: The Next Generation of Modern Orthodoxy, to be held at Yeshiva University in March.) 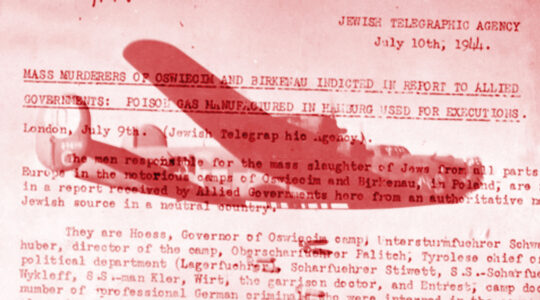