Soviet Jewry: The Struggle to Lift the Iron Curtain 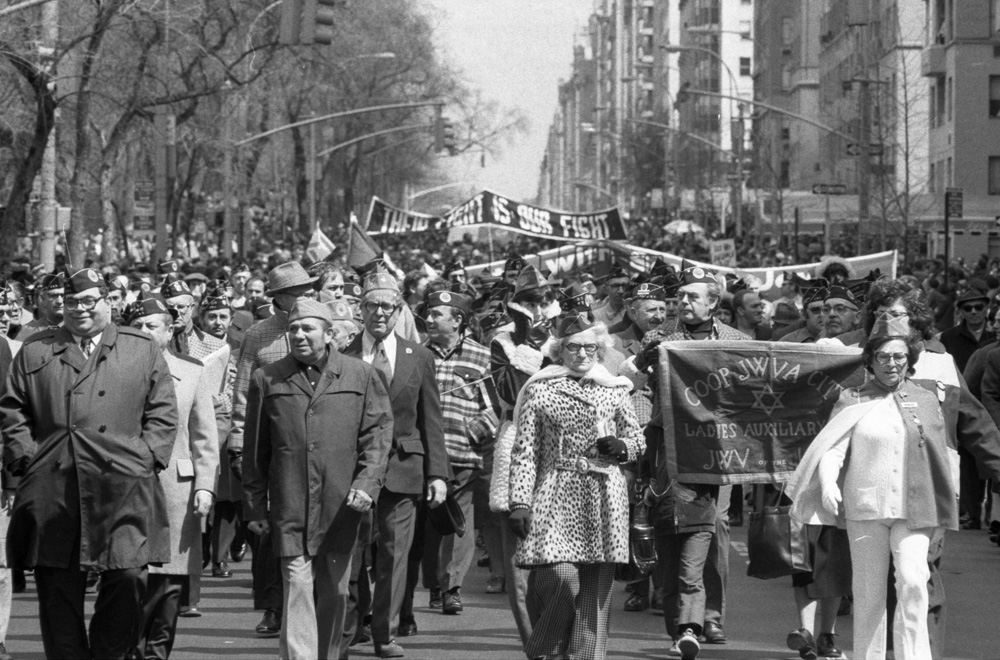 In the 20th century, the Soviet Jewry movement helped define and form the two largest Jewish communities in the Diaspora, those in the United States and in the Soviet Union. The movement, which started in the 1960s, had as its goal to allow the free emigration of Jews, but it also allowed these two communities to overcome the deep scars they were each left with following the Holocaust. American Jews were psychologically scarred from not having done enough to help their European brethren during World War II, and for Soviet Jews there was a scar that ran the length of the Iron Curtain, a physical separation from the Jewish people and spiritual disconnect from the past and heritage.

With the rise of Communism in the USSR in the 1920s, the new Soviet regime tried to eliminate all vestiges of Jewish religious identity, turning much of the community into atheists.  There was also a push by Stalin to move Jews into their own autonomous province, Birobidzhan, in Siberia.

The Nazi push into the Soviet Union in 1941 made the situation of Jews dire, as the Germans massacred Jews in the territory they conquered.  The JTA  was the first to report the slaughter at Babi Yar in September 1941, which typified the atrocities inflicted during that period.  By the end of the war, 532 synagogues had been destroyed by the Nazis.

After World War II, Stalin became paranoid about his Jewish population and imagined they were a fifth column that needed to be stopped.  This manifested itself in the infamous Doctors’ Plot in 1952 and in his attempts to marginalize Jews in Soviet society by increasingly depicting them as enemies.  It became clear to the rest of the Jewish world, even after Stalin’s death in 1953, that the Soviet Jewish community was suffering a slow death of assimilation and, as some began referring to it, “spiritual strangulation”.

From the first stirrings of a movement – on college campuses in the United States and in the Soviet underground – the JTA made attempts to capture the story. As early as 1964, reports of unprecedented Simchat Torah celebrations by as many as 15,000 Moscow Jews, dancing and singing in front of the city’s Great Choral Synagogue, were making it out to the West. The Student Struggle for Soviet Jewry, one of the first grassroots groups mobilizing around the issue, held its founding demonstration on May 1, 1964. Early grassroots centers of American Jewish activity could also be found in other cities like Cleveland and Philadelphia .

But the movement only gained force in the 1960s as individual cases became more widely known, particularly as a result of press coverage. One of the first such stories was the arrest and trial of Boris Kochubievsky, an engineer in Kiev who, following the Six Day War, decided to protest his situation and try to leave the Soviet Union. The JTA covered the shady circumstances of his detainment in the summer of 1969 and then the reaction it elicited in the West, both New York and London.

However, the event that truly transformed the movement from being the province of a handful of student and grassroots activists in the West and a few brave dissidents in the Soviet Union into a global cause was the Leningrad Hijacking. This was the story of a handful of Jews from Riga and Leningrad who had been refused exit visas – becoming some of the first refuseniks – and decided to protest their plight by hijacking a small, 12-seater plane and flying it out of the Soviet Union. The KGB was on to them from almost the beginning, but let them continue until June 15, 1970, when they were all arrested on the tarmac. That December, the Soviet Union organized a major show trial and in the end the two leaders of the plot were sentenced to death. The JTA covered the enormous world outcry, from the threats by Meir Kahane that he would kill “two Russians for every Jew” to the unprecedented gathering in Washington to urge President Richard Nixon to press the Soviets. After only a week and a half, the Soviet relented and commuted the death sentences.

As the 1970s progressed, the Soviet Jewry movement grew and developed into an institution of American Jewish life. Two large, national organizations were founded devoted solely to the issue, the National Conference on Soviet Jewry  and theUnion of Councils. And American Jews mobilized around the Jackson-Vanik amendment, a piece of legislation that would make any trade relationship with the Soviet Union contingent on a freeing up of emigration. The community even had toconfront Secretary of State Henry Kissinger, who was opposed to making this moral issue part of American foreign policy.  Eventually at the beginning of 1975, after a two-and-a-half-year battle, it was signed into law.

The 1970s also saw the emergence of some prominent refuseniks whose stories were reported on in detail by the JTA. Much attention was spent on the tribulations and often trials of people like Vladimir Slepak and Ida Nudel  . But no individual refusenik became better known than Anatoly Shcharansky, an activist involved with both the Jewish movement and the struggle for democracy and human rights in the Soviet Union. He was arrested in 1977 and put on trial in the summer of 1978. He was sentenced to 13 years in prison. The JTA also covered the campaign of his wife, Avital, who was a constant presence advocating for his release throughout his years in prison.

When Shcharansky was finally let go in 1986 it was one of the first signs that the Soviet Union was changing its attitude about its Jews. Mikhail Gorbachev was looking for rapprochement with the West and Ronald Reagan had made it clear – as had the American Jewish community – that freeing up emigration would be the price. In 1987, what the JTA first described as a “stagnant low” in emigration turned into a nine-fold increase, along with the release of most of the longtime refuseniks.

For many American Jews, the apogee of their Soviet Jewry activism came in December 1987 when they participated in a massive protest that greeted Gorbachev on his first visit to Washington. Jews from all over the United States went to great lengths to attend. Eventually a quarter of a million showed up, sending a strong message to the Soviets. It wasn’t long before the exodus began.

Gal Beckerman is the author of  “When They Come for Us, We’ll Be Gone” (Houghton Mifflin Harcourt, 2010).

Other articles of interest:
1920s

1929 Matzoth Importation Continues as Issue in the Soviet Press

1944 Evacuated Russian Jews Return to Liberated Areas in the Ukraine

1975 Leadership Parlay to Focus on Soviet Jewry Issue in Light of Stepped Up Persecutions, Anti-Zionist Resolution