Between rockets and sirens, Israelis find time to laugh

Hundred of rockets are launched from Gaza and aimed at the cities of Israel from Sderot to Tel Aviv, and what do they Israelis do? Laugh about it, obviously.

Like most Jews, humor seems to be the best medicine to the surreal situation, especially when the rocket threat has finally made it to the Tel Aviv on its bloggers and Internet geeks.

The recent round of violence took a huge turn when Israel assassinated Ahmed Jabari, the Hamas’ “Chief of Staff.”

Jabari was in charge of abducting and later releasing Israeli soldier Gilad Shalit, and was even photographed with him on the day Shalit was released. This photo draws an interesting line between Shalit, Jabari’s death, and an interesting third party:

Many Israelis are forced to meet their neighbors at the bomb shelters, here is a take on Nokia’s famous slogan:

The people of Tel Aviv are upset their daily routine of eating sushi and drinking coffee was so brutally disrupted by Hamas’ rockets, this PSA reads: “in order to respond faster to the next air raid siren, the citizens of Tel Aviv are asked to only drink short Espresso.” 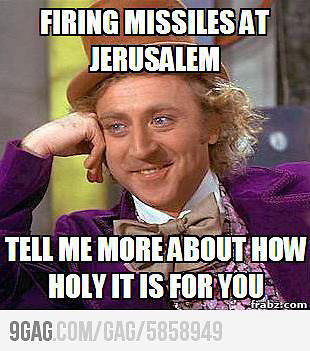 A “Pulp Fiction” parody by the IDF: “Send a Grad rocket one more time!”

Here is a “Princess Bride” reference:

The man who brought the Iron Dome to Israel is former Defense Minister Amir Peretz, while being unpopular in office, he is now an alternative national hero:

In case you forget, elections in Israel are only 2 months away. Some Israelis think that it is a conspiracy, like this version of Israeli Prime Minister Benjamin Netanyahu as “The Most Interesting Man in the World” saying, “I don’t always attack Gaza, but when I do, it’s before the elections”

Israeli Defense Minister Ehud Barak is most likely not going to be in the next Knesset since his current party, Atzmaut (Independence) is extremely low in the polls. This could change this year with the film “Saving General Ehud, a Benjamin Netanyahu film”

Netanyahu gets some “Gangnam Style” love, with Jabari flying in the background:

While Kim Kardashian, Idan Reichel and Bar Refaeliare tweeting about the fighting, some Israeli soldiers are uploading their photos to Instagram, as BuzzFeed notes:

And perhaps the most annoying thing about this conflict are your Facebook friends: