There aren’t that many Jewish couples out there. On television, that is.

Sure, there are plenty of mixed marriages, as there are in real life, but the small screen doesn’t usually feature a couple where both members are Jews.

But we were able to come up with 10 of our favorites in honor of Valentine’s Day after racking our pop culture-loving brains (and searching the internet).

1. The “retired and moved to Boca” couple – Helen and Mordy Seinfeld (“Seinfeld”) 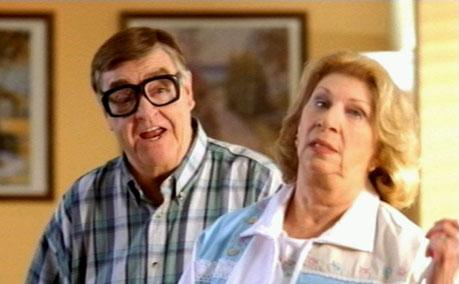 They love each other but fight all time. They wonder why you never call them (or Uncle Leo) and invite themselves over. Mordy (Barney Martin) always complains and yells about everything he doesn’t like, and Helen (Liz Sharidan) yells back at him but always has his back. The Seinfelds are the thick-skinned, proud and caring couple who somehow get along in a faraway land called Florida. “Will & Grace” was one of the first shows to feature a lead gay character, but it also boasted another interesting first: According to The Nation, with the marriage of Grace (Debra Messing) and Leo Markus (Harry Conick Jr.) W&G became the “first prime-time sitcom ever to feature a wedding between a Jewish woman and a Jewish man.” Markus was a doctor (surprise surprise), who at one point cheated on Grace, although they eventually got back together, and now live a great 21st-century New York life with their gay and straight friends.

3. The “convert” couple – Charlotte and Harry Goldenblatt (“Sex and the City”)

The universe never gave them a chance, but they made it anyway. In one corner there’s Charlotte York (Kristin Davis), an attractive, WASPy, naive, prom queen. In the other corner there’s Harry Goldenblatt (Evan Handler), a short, messy, hairy (except for his head), Jewish divorce lawyer. At first sight they didn’t seem like a match, but after realizing how much chemistry they had (mostly in bed) and learning to accept each other as is, they ended up having a really happy marriage. In addition, Charlotte actually converted for Harry. That means a lot.

4. The “dysfunctional because the husband is a workaholic” couple – Melissa and Ari Gold (“Entourage”) Honestly, my first choice was to write “Ari and his career” as a couple, because despite having all the money in the world, the outspoken agent was a pretty terrible husband, since he was just never there. Melissa (Perrey Reeves), who comes from a rich Jewish family as well, has always been pretty admirable for standing up to Ari (Jeremy Piven) and eventually breaking up with him. But being the softy that he is, he eventually realizes what’s more important.

5. The “dysfunctional because they are both batsh*t crazy” couple – Jeff and Susie Greene (“Curb Your Enthusiasm”)

If hell exists, this is its royal couple, ladies and gentlemen. Susie Greene (Susie Essman), the queen of evil – a vulgar, loudmouthed, crazy woman and her off-again, on-again husband Jeff Greene (Jeff Garlin), a Hollywood agent with zero morals and a fast-track to dig himself into holes where he hopefully cannot hear the screaming of his wife. Only a ridiculous enough person like Larry David would be friends with these two.

Oh, Kyle’s parents. The Jersey-accent, overly caring, PTA master mother. And her nebbishy, bald and hairy husband who tries to be a role model to sons Kyle and adopted Canadian brother Ike, but always ends up following his wife or turns out to be just another greedy lawyer. Gerald Broflovski is one of the most underrated characters on the show. The guy is hilarious. He also gets himself into occasional awkward situations like being naked in a hut tub at a party, trying to be a dolphin or just dressing up like a raging metrosexual.

7. The “are you sure you two are not related?” couple – Mort and Muriel Goldman (“Family Guy”) 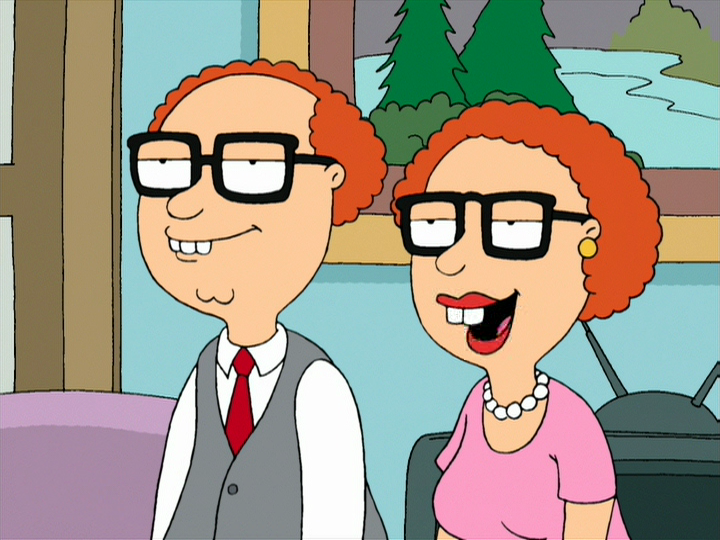 I mean, look at them.

8. The “funny unless they’re your parents” couple – Jack and Judy Geller (“Friends”)

I was debating how to categorize Ross and Monica’s parents, since most of what we see has to do with their interaction with their children (condescending to Monica while favoring Ross). But maybe that’s the point — their behavior towards the siblings is what defines them as a couple. Jack (Elliott Gould) is full of inappropriate comments that Judy (Christina Pickles) brushes off, and Judy is full of condescending remarks that Jack supports. They aren’t a bad couple at all, just kind of, umm, bad parents. 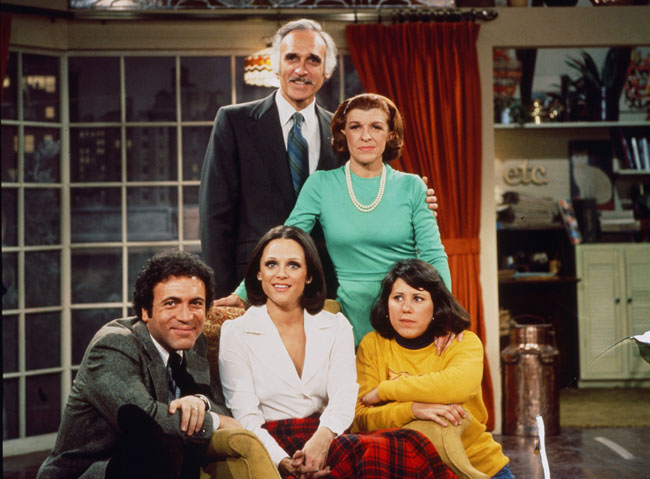 Like many other television couples of all religions, the wife (Nancy Walker) is opinionated, overbearing and tries to control her daughter’s life while the husband (Harold Gould) is calm and levelheaded. Guess who wins the arguments?

Tommy and Dil’s grandparents are from the “old country,” meaning Eastern Europe. They tend to complain about how bad things used to be and how today’s kids should feel lucky for having what they have. Between the two of them, it’s those petty arguments that make them a hilarious adorable couple, because they would probably never go to bed angry at each other.

Did we miss anyone? Let us know! Happy Valentine’s Day, everyone!