After Auschwitz trip, Cantor warns against dangers of isolationism 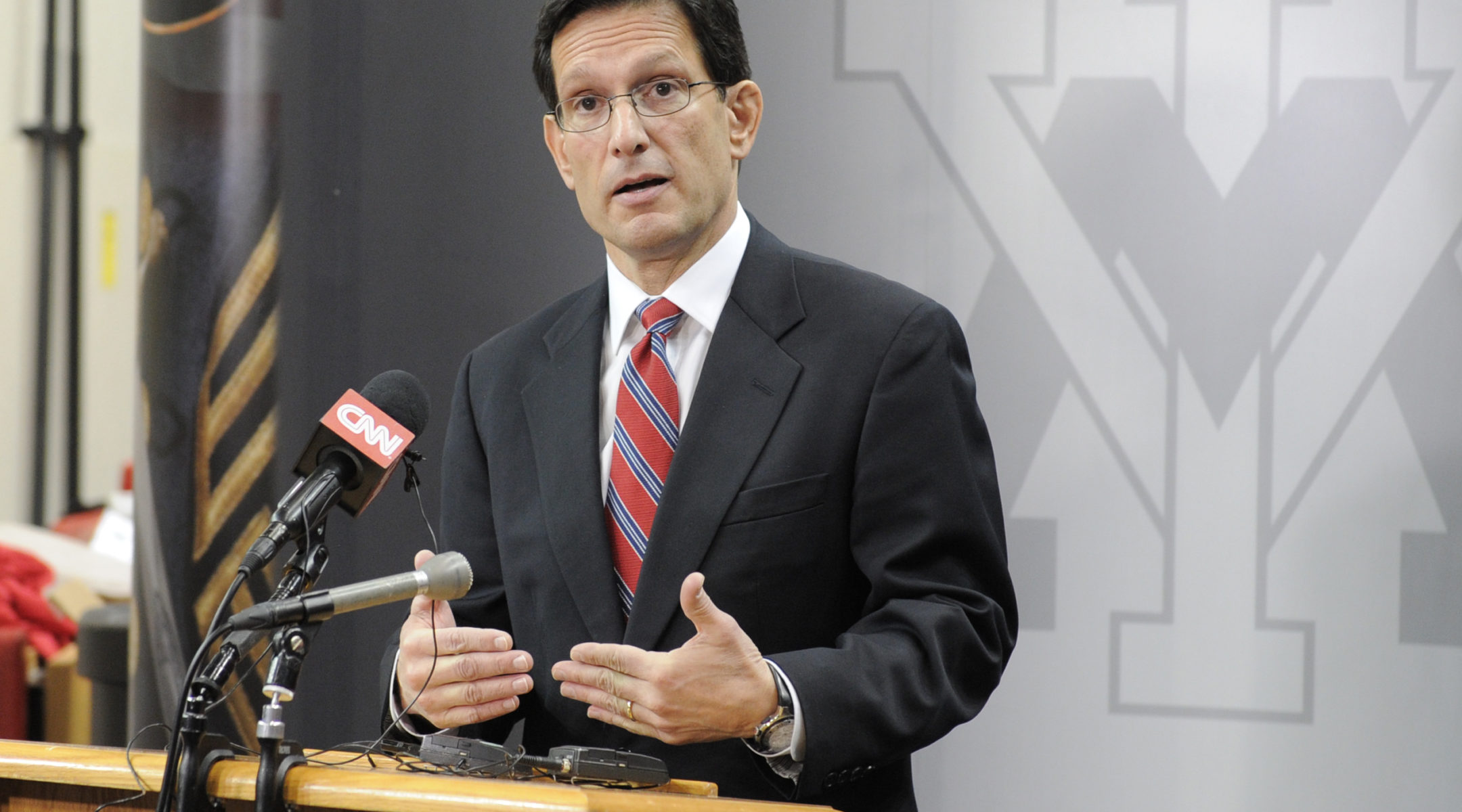 WASHINGTON (JTA) — When Rep. Eric Cantor took the stage last week at the Virginia Military Institute to deliver a wide-ranging foreign policy address, Auschwitz was on the House majority leader’s mind — and so, observers suggest, was the state of his party.

In his speech, the Virginia Republican cited his recent visit — his first — to the Nazi death camp, connecting past horrors to the present-day danger of retreating into isolationism.

“Standing there as the frigid wind swept through the eerily quiet ruins of the camp, I could not help but regret that American action in World War II came too late to save countless millions of innocent lives,” Cantor said.

While the bulk of his Feb. 17 speech was a critique of the Obama administration’s foreign policy, Cantor also seemed to take aim at anti-interventionists within the GOP.

“Many Americans, and politicians from both parties, want to believe the tide of war has receded,” he said. “As was the case in the wake of World War I, many want to believe the costly foreign interventions of recent years can simply be put behind us.”

An influential Republican congressional staffer suggested that the speech was a rejoinder to anti-interventionists in Congress and to those who allowed military spending to be cut as a result of sequestration.

“This is Cantor trying to reorient the party,” said the staffer, who was not authorized to speak on the record.

Frank Luntz, a top Republican political consultant, said Cantor was ”making a statement that the isolationists in the GOP are acting in a destructive way, that there’s one thing that unites both those on the right and those in the center — a strong America and a peaceful America.”

The GOP is heading into this midterm election year in a state of turmoil, deeply divided between Tea Party-aligned right-wingers and establishment Republicans. Those on the right who advocate shifting toward an anti-interventionist foreign policy — a small minority among congressional Republicans — have grown louder, with Sen. Rand Paul (R-Ky.) featuring prominently among the party’s presumed 2016 presidential contenders.

The Virginia Military Institute speech is one of the ways in which Cantor — sometimes mentioned as a future House speaker or possible vice-presidential pick — has tried in recent weeks to shape his party’s agenda on both foreign and domestic policy. Earlier this month he penned an article for the venerable conservative magazine National Review outlining the House Republicans’ vision for economic and jobs growth.

But while Cantor is asserting his leadership within the party more broadly, sources who have spoken to him suggest his foreign policy address was shaped specifically by profound feelings aroused by his visit to Auschwitz.

Cantor, the only Jewish Republican in Congress, had visited Auschwitz with other members of Congress to mark International Holocaust Remembrance Day, which commemorates the anniversary of the camp’s liberation. He was there at the same time as a historic delegation that included nearly half the members of the Israeli Knesset.

“I saw him after he returned from his visit to Auschwitz, and he came over to me and he was still stunned 36 hours after he had been there,” Luntz said. “I could feel his emotional reaction five feet from him.”

William Daroff, a former Republican operative who now directs the Washington office of Jewish Federations of North America, said he had a similar conversation with Cantor a day after his return.

“He was profoundly impacted by what he had seen,” Daroff said of their phone conversation. “He’d never been to Auschwitz before. It really brings home the impact of inaction in the world scene.”

Cantor was traveling and was not available for an interview.

In his VMI speech, Cantor invoked his Jewish identity in discussing his pride in America’s role in defeating Hitler and ending the Holocaust, as well as his regret that America had not acted sooner because of the strength of isolationism. He referred to this history in calling for reasserting American leadership in the world, which he argued had been undermined by President Obama.

“This isolationist sentiment lasted years, until the bombing of Pearl Harbor woke the American people from their slumber,” he said. “We must not repeat the same mistake by reducing our preparedness, accepting the notion that we are one of many or ceding global leadership to others.”

In 45 minutes, Cantor swept through what he described as an Obama administration foreign policy characterized by “hollow rhetoric, unwise or elastic timelines, and unenforced red lines” vis-a-vis repressive regimes in Iran, North Korea and Syria, as well as failings in dealing with Russia, China and extremism in post-Gadhafi Libya.

Iran was a major focus of the speech, with Cantor alluding to calls by past Iranian leaders for Israel’s disappearance and saying that the interim nuclear deal that set the stage for talks now underway between the major powers and Iran had given away too much for too little.

“Like all Americans, I hope to see Iran abandon its nuclear aspirations through peaceful negotiations, but hope is not a strategy,” he said.