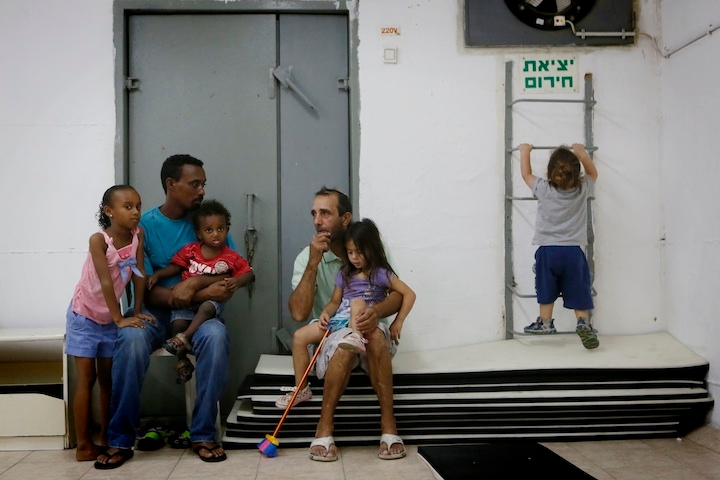 That haunting song offered a stunning reminder of the endless horrors of war, reawakening a sleepy world with a vivid musical picture of human pain in times of combat. Merry Clayton’s evocative vocalization of disturbing lyrics over a harsh musical background focused global attention on the awful realities of the Vietnam War.

Nowadays, though, one hardly requires a song to experience war — live news feeds, endless websites and constant e-alerts satiate us with such input constantly. Such has certainly been the case with the ongoing Gaza-Israel crisis of the past weeks. Often ignored amid the images we see, however, are the more human sides of military conflict.

Last week in Jerusalem, I witnessed this more human side. It started in a crowded lecture hall when the alarming, warbling music of the first siren in the city immediately captured the attention of all present. Quickly, though not very quietly, we filed into the “miklat” — the shelter located in the basement of almost every building in Israel.

Many Israelis do this with a practiced nonchalance learned over many wars and missile attacks. They roll their eyes at the inconvenience, remark on the fact that a little siren can take precedence over even the most important conversation or event, chuckle at morbid jokes and generally riff on the annoyance of such happenings.

It is, I suppose, a way of normalizing the abnormal — if quotidian life can continue even in the face of the fear, then the victory of Hamas, Hezbollah or whoever the present enemy may be is thereby restricted and limited.

In the shelter, the most remarkable equality reigns. Babies, young children, teens, soldiers, the elderly are all there — the entire cycle of life walks down those stairs to seek safety, with all its glories and challenges blatantly displayed. Those bedecked in yarmulkes or dressed in the black suits and hats of the haredi Orthodox stand alongside those who live Reform, Conservative, secular or more postmodern lives, along with Israeli Arabs, Druze, Christians and others.

Some pray, others recite Psalms, some chat, but most sit quietly and await the “all clear.” For a few minutes, the divergent, contradictory and competitive streams of life in Israel all converge, and human safety becomes the sole communal objective.

Walking on the street in Jerusalem when the alarm sounds, the scene is even more profound. As people move to their private shelters, whoever happens to be on the street is welcomed in, no questions asked. Shopkeepers, normally reticent to share their precious stockrooms with strangers, welcome passers-by into their inner sanctum without hesitation. Doors everywhere fly rapidly open, and the true value of “hakhnasat orhim” – welcoming the stranger – happens all over the country.

On buses and in cars, the same principle holds true, for wherever one stops, one is welcomed. Such shared vulnerability unites the country, reminding everyone of their inescapable linkage to state and people, shared government and collective fate.

This particular night, I happened to be with a group of our North American students who had come to Jerusalem just days before to begin the first year of their studies to become rabbis, cantors and Jewish educators. It was surreal for them, to be sure, these young visitors so recently transplanted into a new and foreign culture at a very challenging time.

Along with a palpable nervousness, what emerged with them as we left the shelter together and dispersed into the balmy Jerusalem night was a sense of being at one with their people. A people sheltered together, against whatever the world might tender.