Op-Ed: In football-crazed Alabama, a respite from the world’s ills 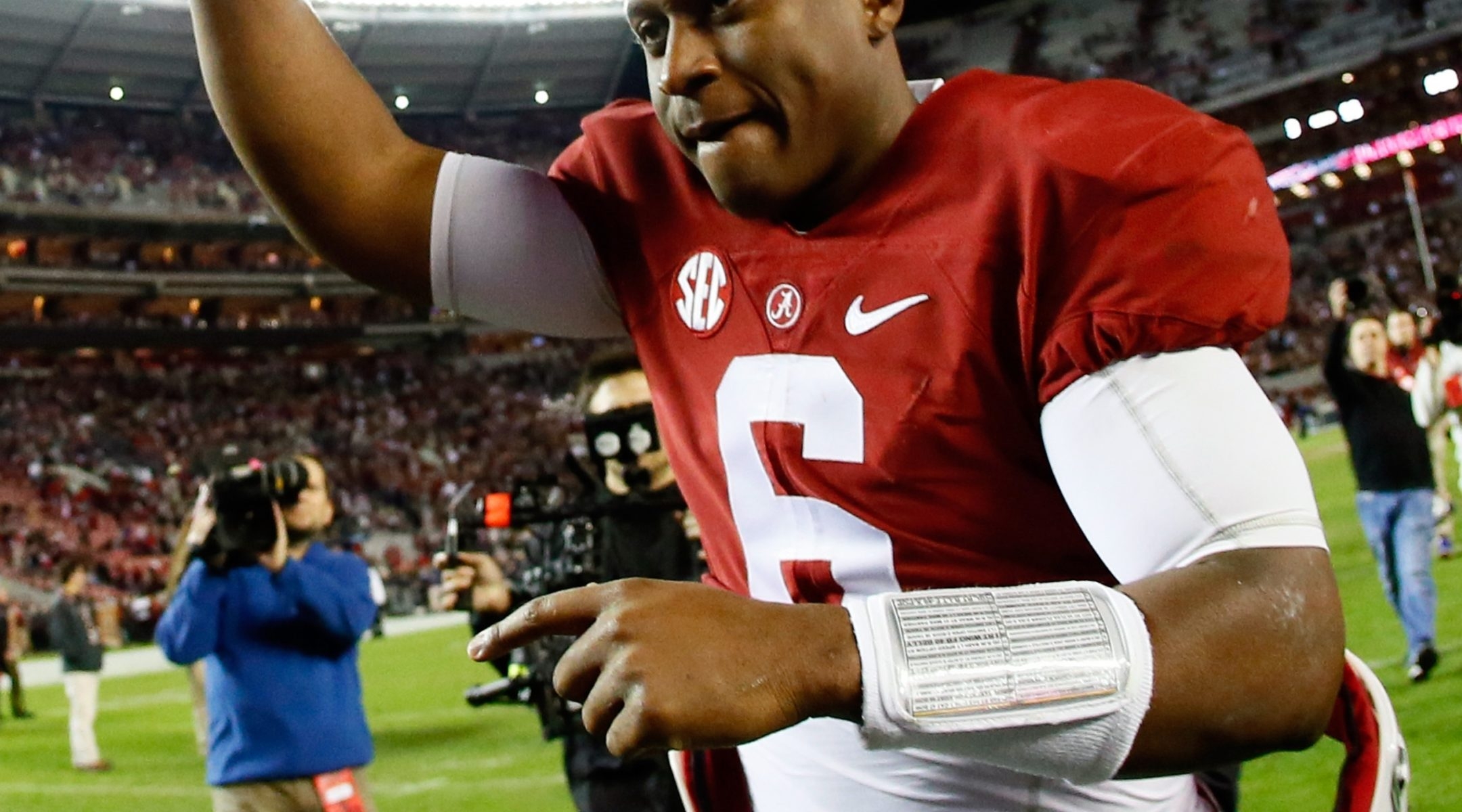 University of Alabama quarterback Blake Sims celebrating as he runs off the field following the host Crimson Tide's 55-44 victory over Auburn in Tuscaloosa, Ala., Nov. 29, 2014. (Kevin C. Cox/Getty Images)
Advertisement

BIRMINGHAM, Ala. (JTA) — On Thanksgiving at my son’s house, I found myself at the end of a long dinner table, some in-town family members on my left. They were chatting about college football, especially the Alabama-Auburn game that would be played two nights later.

No surprise there — that’s what people in Birmingham do on Thanksgiving.

On my right was a family member from another state.

“What is it with you people in Alabama?” he teasingly chided me. “All you care about is college football!”

“What about world peace, disease and all the other problems facing society?” he asked.

I pretended to ponder his question before answering, “I have two words for you.”

He took a guess at those two words using a well-known coarse expression.

“Nope,” I shook my head, deadpanning. “The two words are ‘Roll Tide!’ ” (That’s how University of Alabama fans cheer for their beloved Crimson Tide.)

It was a fun exchange, but afterward I found myself thinking seriously about it.

We in Alabama, of course, do care deeply about the ills of the world to which the out-of-towner referred, and The Birmingham Jewish Federation is involved in responding to many of them. At the same time, however, Alabamians indeed care more about college football than the folks in any other state, according to a recent New York Times story.

Why wouldn’t we? Over the past five years, either the University of Alabama or Auburn University, also located in our state, has played in the national championship game, winning four times. And Alabama, if it wins the Southeastern Conference title game on Saturday against Missouri and conquers all in the new college football playoffs, would again be crowned national champions.

Moreover, the annual Auburn-Alabama game, which was played this year in Tuscaloosa, home of the University of Alabama, is considered by many national experts to be the most intense rivalry in college football.

This year’s game was another classic, an action-packed drama full of twists and turns with Alabama, ranked No. 1 in the country, rallying for a 55-44 victory.

We in the Birmingham Jewish community have special ties to our state’s college football programs. Through our Birmingham Jewish Federation and Foundation, we work with Alabama, Auburn, the University of Alabama at Birmingham (UAB) and Birmingham-Southern College to strengthen Jewish life on campus and encourage Jewish students to consider these schools.

Beyond that, well-known Birmingham Jews play important roles on the college football stage.

Mike Slive is the commissioner of the Southeastern Conference and often has been described as one of the most powerful figures in college sports. Dr. Robert Levin, a pediatrician, is the longtime announcer for the University of Alabama Million Dollar Band. Eddie Garfinkle is head football coach at Birmingham-Southern. And our past federation president, businessman Jimmy Filler, has been a major benefactor and advocate for the UAB football program.

Most (but not all) members of our Birmingham Jewish community are Crimson Tide fans. Many of them attended Alabama and still revel in going to the games. They have multigenerational ties to the university.

In thinking about it, I also have come to realize that one reason that so many of us care about college football, especially in these tough times, is actually due to the ills of the world.

We Americans, especially Jews and supporters of Israel, are facing daunting issues: growing anti-Semitism, Israel’s security challenges, radical Islam, general upheaval in the world and acute political polarization in our country, just to name a few. So this football thing that we never tire of down here takes our minds off these and other issues, if only momentarily.

It sure does for me. That was made clear as I sat at home in my favorite chair watching the Alabama-Auburn game wearing my crimson turtleneck and Alabama hat. I was absorbed in the agony and ecstasy of the football drama that was unfolding; not once did the difficult issues that I am concerned about constantly as a federation director cross my mind.

Saturday was an evening to put all that aside, marvel at Alabama’s remarkable comeback and shout two words: Roll Tide!

(Richard Friedman is the executive director of the Birmingham, Ala., Jewish Federation.)