From the Archive: Jews and the joint 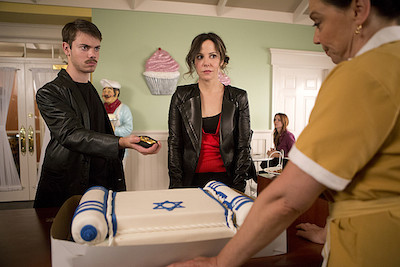 Last week JTA reported on a new group named Le’Or that is trying to engage the organized American Jewish community in the campaign to legalize marijuana.

While JTA’s archives include far more references to The Joint (a nickname for the American Jewish Joint Distribution Committee) than joints (or bongs or pipes), the topic of marijuana has come up from time to time. And that’s not just because the long-running Showtime series “Weeds,” about a suburban pot-dealing mom, frequently rolled Jewish rituals into the plot.

Not surprisingly, the demon weed was referenced most frequently in the late 1960s and early ‘70s, when smoking pot became commonplace among young middle-class Jews in both the United States and Israel.

In a January 1968 conference for national staff of the B’nai B’rith Youth Organization (now BBYO), the “rising incidence of Jewish teenage ‘anti-social behavior’ was discussed at length,” JTA reported.

The group did not regard narcotic addiction as an overriding problem among Jewish teenagers but some individuals said they have observed a significant increase in the use of drugs among Jewish youth in recent years. They asserted that “it has now become fashionable and a status symbol among many Jewish middle class teenagers to smoke ‘pot’ and to ‘pop’ amphetamines.”

As an antidote to such “anti-social behavior” (other examples besides drug use included “acts of vandalism and irresponsibility”), the B’nai B’rith Youth Commission’s national chairman recommended that youth movements “accelerate their efforts to involve young people in relevant learning and action programs within the Jewish tradition.”

That same year at the B’nai B’rith Young Adults international convention, delegates noted in one of the numerous resolutions they approved that justice and equality “was a better ‘mind-expanding’ device than marijuana and LSD.”

[The youth leaders] went on record as opposing the legalization of marijuana but said some of the harsher penalties for its use imposed on young offenders should be eased.

The young adult delegates also noted in its resolutions that “although our generation lives in the midst of revolutionary change in moral practices, we look in vain for reasonable standards to be followed.”

Marijuana use among young Jews (“a daily fact”) came up the following year at a meeting of campus Hillel directors, but seemed to be of less concern than “liberality in sexual relations” and more openness to interfaith marriage.

Le’Or is by no means the first Jewish pro-legalization effort. In 1999, JTA reported on Israel’s pro-legalization Green Leaf Party, which “created a stir with a video clip featuring psychedelic images and the Israeli national anthem, ‘Hatikvah,’ pulsing to a trance beat”:

The party logo: an Israeli flag with a five-pointed cannabis plant replacing the star of David. Boaz Wachtel, a party leader and veteran substance abuse counselor, says Israel ranks second out of 17 Western countries in hard drug abuse, and that legalizing cannabis can help solve the problem. Although Green Leaf is not scoring high in the polls, Wachtel says the party took nearly 4 percent of the vote in elections on vocational college campuses and 8 percent in simulated elections in high schools. Green Leaf, he promises, will get into the Knesset.

“If you translate the number of [pot] smokers into electoral power,” says Wachtel, “we’re going to be the Shas [a powerful Sephardic party] of the grass.”

The party still exists, but has yet to win a Knesset seat. Indeed, its “Shas of grass” hopes remain an, ahem, pipe dream.