Amid a failing effort, AIPAC still rallies the troops against Iran deal 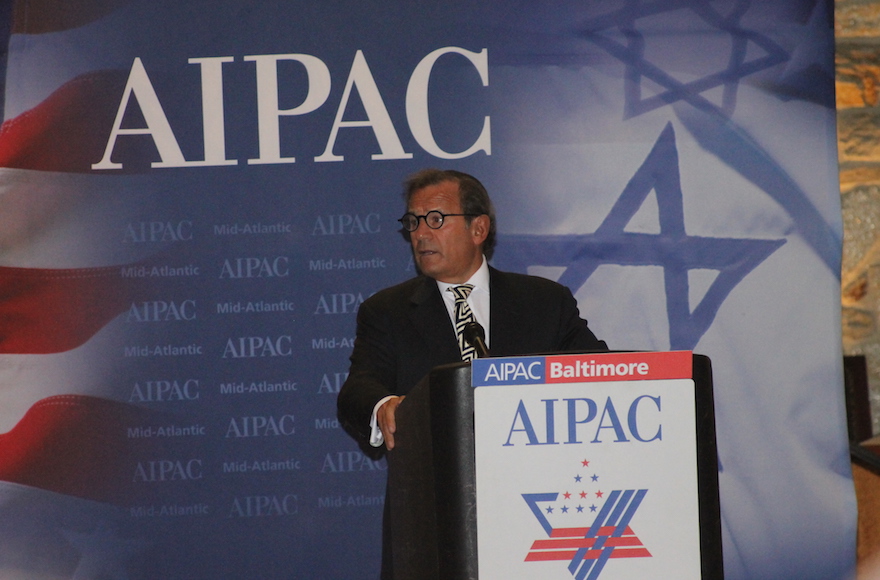 “Go to that little address icon where you put in new numbers,” the executive director of the American Israel Public Affairs Committee tells 1,600 people packed into Beth Tfiloh, a suburban Baltimore synagogue, on Tuesday evening.

Kohr then recites two telephone numbers: one for the Senate, one for the U.S. House of Representatives. It’s the Senate number, (202) 224-3121, that he considers more important — he repeats it three times.

“Call Senator Mikulski and call Senator Cardin and urge them to oppose the deal,” he says. “We need a better deal.”

The deal in question is, of course, the nuclear agreement reached in July between Iran and six major powers. AIPAC opposes the deal; President Barack Obama favors it.

Most if not all Republicans also are against the deal, so that leaves the Democratic caucus as the battleground in both chambers.

“It is my belief if we can move the members of this delegation, it will have an impact on other delegations,” he says.

It likely would have, but it’s too late: Mikulski announced her support for the deal 12 hours or so after Kohr’s impassioned appeal, giving Obama the 34 U.S. senators he needs to prevent an override of the veto he pledged to deliver should Congress reject the nuclear deal. Congress reconvenes Sept. 8; the deadline for a congressional vote is Sept. 17.

AIPAC is holding another event on Thursday night in Livingston, New Jersey, targeting Sen. Cory Booker, another undecided Democrat who is close to his state’s Jewish and pro-Israel communities.

With the likelihood of an Obama victory imminent, the tone of the speeches at Beth Tfiloh are less rally for victory and more defiant resignation: Go down fighting.

The modern Orthodox congregation’s rabbi, Mitchell Wohlberg, appeals to the crowd not to let the vote tally in favor of the deal climb from a veto-proof 34 to a vote-proof 41, which would allow the deal’s supporters to filibuster and prevent any vote from even taking place in the Senate.

“What a powerful message we send the world if the majority of both houses joined by the American people vote down the deal,” Wohlberg says.

The focus is especially on Cardin, scion of a prominent Maryland Jewish family and the senior Democrat on the Senate Foreign Relations Committee.

The event “is not directed at any particular individual or lawmaker, but I want to say one quick story about Senator Cardin,” Yehuda Neuberger, AIPAC’s lay leader in the region, says to laughter.

Neuberger says he has been lobbying Cardin intensely and reveals that the senator told him that he holds Wohlberg in especially high regard.

Wohlberg delivers a broadside against Jewish backers of the deal, naming J Street and reading out a letter from the group requesting a hearing at the synagogue – and then reading his reply, emphatically turning down the liberal Jewish lobby group that describes itself as pro-Israel and pro-peace.

The gathering whoops its approval, but it is clear that the big fight is over: Kohr’s final appeal is for the activists to make the calls to their lawmakers not because they will win — but because they will be able to tell future generations that they did the right thing.

He praises congregants who brought their children to the event, as the kids scamper through the aisles. By making the calls to Congress, Kohr says, they can look into their children’s eyes now and for generations to come and say, “When American interests were jeopardized and when Israel’s existence was at stake, I did everything that I could to ensure that America, the greatest country on earth, stood at Israel’s side.”

“Am Yisrael Chai,” the Jewish people lives, Kohr concludes. Many echo him, but congregants are mostly eager to get out into the overflowing parking lot, enjoy the cooling evening and chat with friends.