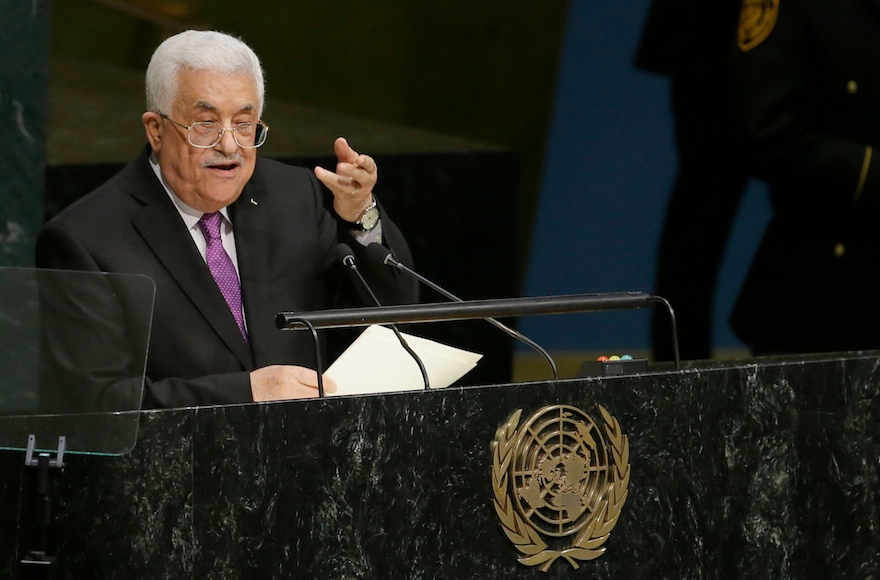 (JTA) — The Palestinian Authority is circulating to U.N. Security Council members a draft resolution condemning Israeli building in the West Bank and Jerusalem.

The resolution, which P.A. President Mahmoud Abbas reportedly is hoping to bring to a vote in two weeks, was reported Thursday by Haaretz, which cited Western diplomats and senior Palestinian officials.

In a statement issued in response, Prime Minister Benjamin Netanyahu said Abbas “is taking a step that will push negotiations further away.”

“The only way to advance peace is by direct negotiations and Abu Mazen is avoiding this,” the Israeli leader said, using Abbas’ nom de guerre. “The Palestinians educate their children on a daily basis that the settlements are Tel Aviv, Haifa and Acre.”

According to Haaretz, the move to condemn the settlements has been in the works since the beginning of the year. A senior Palestinian official told the Israeli daily that Abbas will be arriving in New York on April 22, Passover eve, to attend the planned vote.

Abbas is also expected over the next two weeks to make diplomatic visits to Paris, Berlin and Moscow to build support for the resolution.

The Security Council last voted on such a resolution in February 2011. It was approved but vetoed by the United States.

According to Haaretz, the draft states that the settlements are an obstacle to peace and Israel must stop construction. The resolution also condemns settler violence against Palestinians.