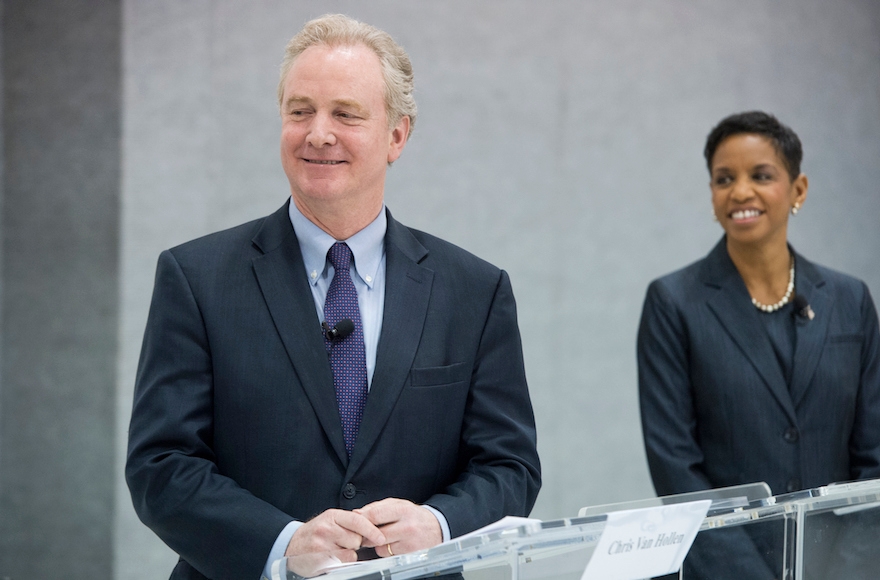 Maryland goes to the polls Tuesday – one of five states where the two remaining candidates in the Democratic presidential race and the three in the Republican race are facing off.

The headline: It’s the new Super Tuesday, at least for the Democrats. This could be the day that once and for all determines that Hillary Clinton is the party’s candidate. One of rival Bernie Sanders’ advisers, Tad Devine, hinted last week that if Sanders does not score a major upset, there may be a “reevaluation,” although the campaign manager, Jeffrey Weaver, is vowing to stick it out to the convention in July.

But there are down-ticket primaries as well, and plenty of pro-Israel and Jewish action above and below the surface. Here’s a look at those races.

Chris Van Hollen and Donna Edwards are not talking about Israel. Or Mars.

Sen. Barbara Mikulski, D-Md., is retiring, and two popular members of the U.S. House of Representatives are vying for her spot: Donna Edwards and Chris Van Hollen.

A major difference between the two candidates? Israel. Edwards has been an outspoken critic of Israel and the pro-Israel lobby; Van Hollen, except for a blip of criticism after the 2006 Lebanon War, has been solidly in the pro-Israel column.

But it has barely registered in the campaign.

Edwards tried to make Iran an issue a year ago, suggesting Van Hollen did not back the nuclear deal – until he did. Debates between the candidates have focused on identity issues and the ability to get along with others. Edwards would be only the second black woman in the U.S. Senate and Van Hollen from 2007 to 2011 was a popular chairman of the House reelection campaign. (The Intercept reported Monday that Haim Saban, the pro-Israel entertainment mogul, contributed $100,000 to a political action committee backing Van Hollen.)

Pro-Israel rumbling has occurred mainly below the radar, in social media, where Van Hollen supporters are distributing a list showing the lawmaker signing pro-Israel letters and backing pro-Israel resolutions that Edwards abjured or opposed. In 2009, for instance, when 390 lawmakers voted for a resolution backing Israel during its war against Hamas that year, Edwards voted “present.”

Also, curiously, not an issue: Edwards, an ardent supporter of funding for a manned mission to Mars (NASA is headquartered in her district), has said she would go herself, even if she would not be able to return. (The challenges to returning astronauts safely from a Mars mission are considered formidable.)

“If they need somebody who would go to Mars even without a return ticket, I would volunteer,” she said in February 2015 on National Public Radio’s Washington-area affiliate, WAMU.

Just a month later, after she declared her candidacy, WAMU reminded her of her pledge, and asked if she would go even if it meant leaving during her six-year Senate term. Edwards dodged the question.

The ADL did not endorse the wine store guy.

There are 14 candidates — five Republicans and nine Democrats — running to replace Van Hollen in Maryland’s 8th District, which encompasses suburbs of Washington, D.C. Three of the Democrats are Jewish, as are two of the Republicans. The district includes a big chunk of Montgomery County, which is estimated to be as much as 10 percent Jewish. 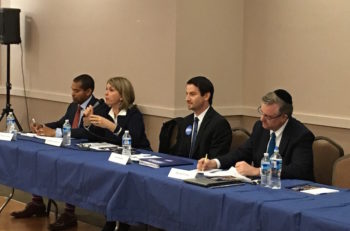 The Republicans are seen as having no chance in the general election. Leading contenders among the Democrats are Jamie Raskin, a state senator who is Jewish, and Kathleen Matthews, a former newscaster who is married to MSNBC’s Chris Matthews.

And then there’s David Trone, whose wife and children are Jewish and who owns the Total Wine & More chain, and who is self-funding — to the tune of $12.4 million, a national record.

When Trone appears before Jewish audiences, as he did earlier this month at a debate at Kemp Mill Synagogue convened by the Orthodox Union, he mentions that next month, he will receive an Anti-Defamation League award for his charitable work. His mailers also mention the award.

It sounds like an endorsement, but the ADL is at pains to say it’s not.

“He was locked in by ADL as an honoree long before he entered this race,” an official of the organization told JTA. “ADL will be making it crystal clear that we are not endorsing his campaign.”

Some of the 14 candidates in the race for Maryland’s 8th District have done their research and some have not, and it plays out in interesting ways in the Jewish campaign.

The front-runners, Raskin and Matthews, have accepted J Street’s endorsement, but are also careful at Jewish events to mention that they have plenty of friends at the American Israel Public Affairs Committee. They all oppose the Boycott, Divestment and Sanctions movement.

There have also been some missteps:

Israel is sovereign, and likes it that way.

Speaking at Kemp Hill, Trone may have pandered a bit too much to a crowd proud of Israel’s independence.

“Israel is without question our most important ally,” he said. “We should look at Israel as the 51st state.”

“Or if you count the District of Columbia, the 52nd state.”

Speaking at an Iranian-American Candidates Forum on March 27, Trone said: “We certainly support the Iranian deal. It’s the right thing.” A blogger caught it on video.

Speaking to the Orthodox Union crowd on April 8, he cast the Obama administration as out of its depth and said it did not get “the right deal.”

Another candidate, Joel Rubin, who as the State Department’s liaison to Congress had advocated for the deal, pointed out the discrepancy on Facebook. Trone now maintains he is aligned with popular (and Jewish) Sen. Ben Cardin, D-Md., who voted against the deal, but now says the best way forward is to make sure it is implemented correctly.

Soften ’em up and then deliver the blow.

Rubin helped found J Street and has been a prominent advocate, in and out of the federal government, for the Iran deal.

At the Kemp Mill synagogue event, he led with fond memories of leading a Zionist Organization of America youth tour of Israel in 1993 before dropping the “J Street” bomb on the Orthodox and politically conservative crowd. There were murmurs, but the room mostly stayed friendly.

Contrast with Ana Sol Gutierrez, a delegate in the state Assembly who chose  the April 17 debate at the JCC in Rockville to announce, in the middle of answering an unrelated question, that she is endorsing Bernie Sanders, hardly the favorite for a mainstream pro-Israel crowd. The room was awash in gasps. 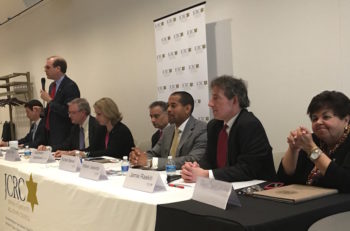 Did you know Kathleen Matthews spent New Year’s in Israel with husband Chris?

Did you know Jamie Raskin has family in Israel and likes hanging with them when he’s there? Which is frequently?

Did you know Joel Rubin’s bubbe Yetta endorsed him and that he has family in Israel and he’s there, frequently, and that he remembers Yitzhak Rabin saying “There will be peace in the North,” and that he can say it in Hebrew, and will, multiple times? “Yihiyeh shalom betzafon.”

And, oh yes, David Trone is getting an award from the ADL.

But if you missed it, you missed a question from the audience rare, if not unprecedented, in a congressional primary debate: “How do you define the word Zionism?”

The answers from the three candidates present were poignant:

Aryeh Shudofsky, a financial services analyst who is a graduate of Yeshiva University, described getting to know an Israel where “secular Israeli Jews are as proud of being Israeli as the religious ones are.”

Dan Cox, an attorney and a conservative Christian, recalled walking through Auschwitz and witnessing “the evidence of why we must stand for freedom.”

And Jeff Jones, a local Methodist pastor, said Zionism, for him, was the commandment to share one’s heritage.

“We have got to understand how to share our story with the next generation,” he said. “It takes effort, it takes a family, it takes a community.”