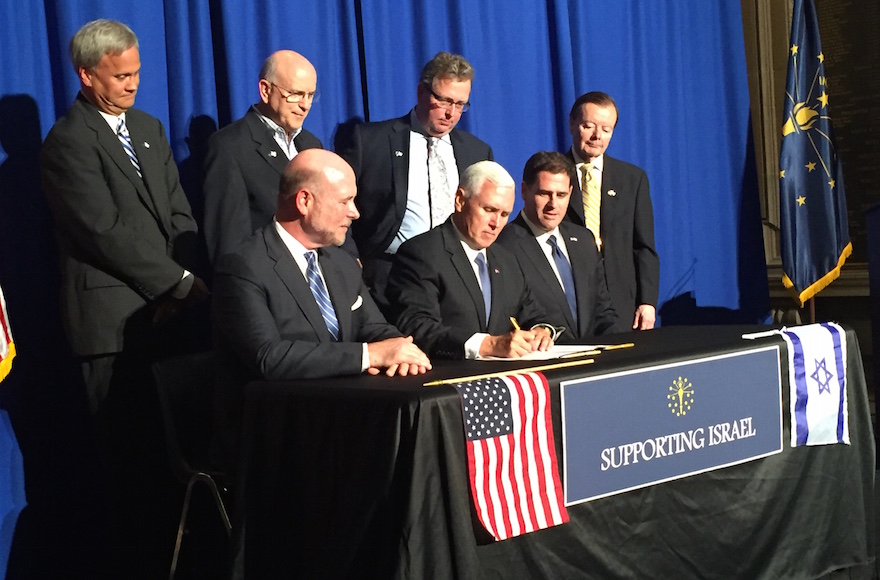 Indiana Gov. Mike Pence joined by Israeli Ambassador to the United States Ron Dermer, second from right, as he ceremonially signed legislation requiring the state to divest from any business that engages in action to boycott, divest or sanction the state of Israel, May 27, 2016. (Screenshot from Twitter)
Advertisement

This is the second of two contrasting views on laws that prevent state agencies from doing business with companies that support a boycott of Israeli products. Earlier this week, Rabbi Jill Jacobs argued that such laws curtail free speech.

(JTA) — On June 16, the New Jersey Assembly is expected to have a final vote on a bill restricting the state’s dealings with companies that boycott Israel. The measure, S1923/A925, would have the Garden State join the nine states that have already adopted such measures in just the past year. Last week, Gov. Andrew Cuomo signed an executive order implementing similar policies in New York state.

These bills are motivated by state lawmakers’ conviction that boycotts of Israel are fundamentally discriminatory and often a thin veil for anti-Semitic motives. They have passed by overwhelming bipartisan votes. But some critics of the measures have recently begun to argue that they violate the First Amendment.

It is important to make clear what these laws do and do not do. None of the laws bans or punishes criticism of Israel, or stops anyone from boycotting Israel. They apply solely to businesses that contract with or get investment money from state governments.

These laws simply say: If you want the state to do business with you, you need to abide by the state’s policies of sound and fair business practices, including anti-discrimination rules.

Take, for example, a company whose CEO speaks out strongly against Israel and hangs a banner from its headquarters that says “Zionism = Racism.” That company would in no way be affected by such laws.

That’s because these laws are not about speech or viewpoints. They are about unfair and discriminatory business decisions. And whether one agrees or not with such laws as a policy matter, there is no question they do not pose a First Amendment problem.

Under well-established U.S. Supreme Court precedent, states can choose not to do business with companies that they regard as engaged in discriminatory activity. That is how states routinely legislate, for example, that their taxpayer money will not go to businesses that maintain sexual-orientation boycotts. Indeed, many localities even require state contractors to engage in affirmative action hiring policies — even if the contractors have a principled objection to affirmative action. The contractors are entitled to their viewpoints, but the state can legislate about their business practices. 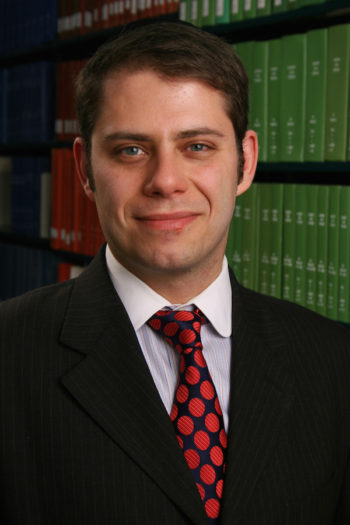 Moreover, if refusing to do business with a country constitutes protected speech because it expresses criticism of a country, then the opposite is also true. That is, choosing to do business could also be a political statement. Yet as Israel boycotters love to point out, some U.S. states adopted boycotts of South Africa. Today, many states restrict business with companies because of their business with Iran or Sudan.

If choosing whether to do business with a country is protected speech, it would lead to the surprising conclusion that states could not regulate any of this conduct. The First Amendment is content neutral and protects expressing support for the government of Iran or South Africa as much as it protects criticism of them.

Some boycott apologists say they are just standing up for human rights. That’s what they say — but state legislators are not bound by the First Amendment to agree with them, any more than they were obligated to accept the argument of some apartheid apologists that they are really motivated by fighting communism.

Instead, state legislators are free to take the word of the founders and leaders of the Boycott, Divestment and Sanctions movement, who have repeatedly made clear that their problem is with the existence of the Jewish state itself. They can notice, as they do in other discrimination situations, the broader context: that the BDS movement is a direct continuation of the Arab League boycott, which is as old as Israel itself. The boycott existed before Israel took control of territories across the 1949 Armistice Lines.

It is true that Israel is not synonymous with Jews. But having a largely Jewish population, and being home to the plurality of the world’s Jews, it is certainly a proxy for Jewishness. Just as a company runs afoul of discrimination rules by using proxies like “neighborhood” for impermissible bias, lawmakers can reasonably conclude that an Israel-focused boycott is such a proxy.

Indeed, Spanish and French courts ruled recently that the boycott movement is a form of nationality-based discrimination.

The American Civil Liberties Union in New Jersey has come out against the bill. Under the statute, like its companions in other states, regular commercial decisions that are not boycott-related do not trigger the law’s provisions.

Critics of the bill, including the ACLU, use this banal feature to argue that the statute creates a “thought police” that will have to determine a company’s “motivation” in not doing business with Israel. However, anti-discrimination law typically requires the government to make a decision about motives. If a company fires a gay person, it could be because of normal business reasons or because of their sexual orientation. It is exactly because discriminatory business decisions can look like regular ones that the question of intent is always primary.

The ACLU does not see other anti-discrimination laws as creating a “thought police” into company’s motives. But there is only one Constitution, and its meaning does not change when it comes to Israel.

(Eugene Kontorovich is a professor at Northwestern University’s Pritzker School of Law. He has been involved in drafting numerous anti-boycott laws across the country.)