In Tel Aviv, a free co-working space becomes a hub for new immigrants TEL AVIV — Los Angeles native Alona Metz is a breast cancer survivor who has made it her life’s mission to help other English-speaking women in Israel affected by cancer.

These immigrants to Israel, all in their early 30s, have come to their new country over the last four years with the idea of doing their own thing rather than working for someone else. Now they all conduct their business out of a new co-working space in Tel Aviv that offers recent newcomers to Israel a convenient place to work with free coffee and minimal distractions.

“I come here as often as I can,” Finkel, 31, said of the hub overlooking Rothschild Boulevard. “It’s a quiet place for when I want to focus and get things done. It’s a great supportive environment for networking and meetings.”

The free shared workspace is run by Nefesh B’Nefesh, the nonprofit agency that assists with aliyah – immigration to Israel – from North America and Britain. The hub provides desks, high-speed internet, a printer, office supplies and free snacks. Most important perhaps, it provides social camaraderie and the kind of professional support network craved by so many new immigrants to Israel.

Open five days a week, the hub currently has about 160 registered users, with about 20 passing through on a typical day. There’s a happy hour on Thursdays, a monthly Shabbat dinner and special events ranging from yoga night to lectures about Israel.

Schon, 30, realized soon after moving to Israel that creating mosaics was a great way to turn drab, graffiti-covered walls in Tel Aviv into vibrant works of art. She began going to Jaffa’s flea market to bargain for tiles, dishes and mirrors, which she breaks up and uses as elements in her variegated mosaics. She has completed five and is working on a sixth for Ben Yehuda 126, an Orthodox synagogue in North Tel Aviv popular with English-speaking immigrants.

Though she’s an artist who works outdoors, Schon spends much of her time indoors — applying for grants, maintaining her website and promoting her workshops.

“I was working at a gallery, then on my own. And then I read about the hub,” said Schon, who had only been to Israel a few times before making aliyah. “It’s an amazing space on Rothschild that they’re just giving away. It’s such a comfortable, happy place. When you enter, people are all kind of on the same page.”

Benji Davis, the Israel program manager at Nefesh B’Nefesh, approached the organization’s management with the idea of opening a relaxed co-working space in Tel Aviv about a year ago.

“We wanted to take this generation of younger, professional olim and give them a place to socially and professionally network,” he said. “Here, everyone can sit together and feel as if they’re developing professionally. A lot of people don’t fit into this regular model of ‘Come here, do a program, get a job.’ Co-working is a genius idea, and we use it as a launching pad to help olim succeed in their life in Israel.”

Finkel, a Wharton School graduate, made aliyah in July 2013 on a Nefesh B’Nefesh charter flight escorted by Gilad Shalit, the Israeli soldier released from captivity after being held by Hamas in Gaza for five years. Soon after arriving, around the time he met his future wife, Finkel discovered silan, or date nectar. 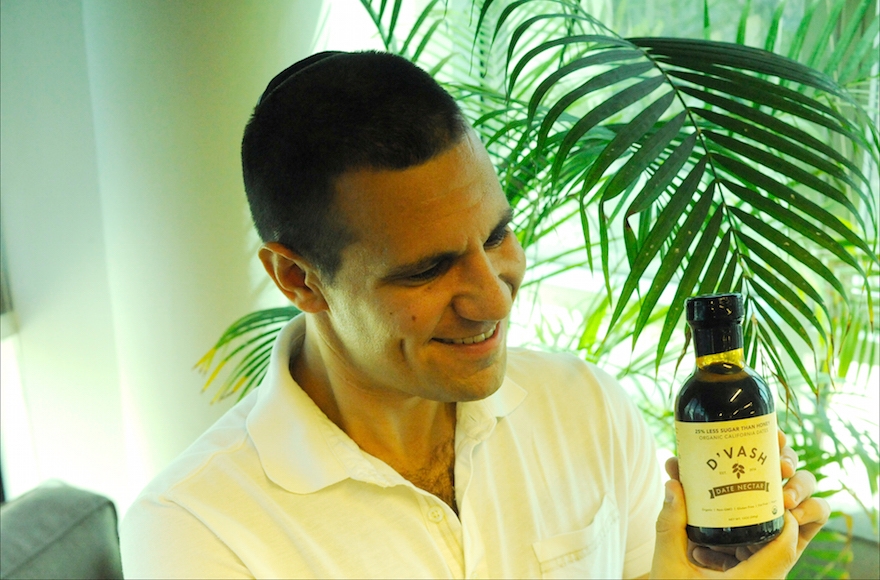 “My mother-in-law uses it in desserts and on chicken. I put it in my yogurt and tea. It’s ubiquitous here and it’s such a versatile product,” he said. “One day, I had this eureka moment. I called my friend and business partner in California and asked him if date nectar was a known quantity in America. He said, ‘No, but it should be.’”

That led to a deal to source the product from organic dates grown in California. The partners thought about exporting the product from Israel but decided shipping costs were prohibitive and that upscale consumers generally prefer locally sourced products.

“Date honey is lower on the glycemic index than bee honey,” Finkel noted. “For people watching their sugar, dates are a healthy source of antioxidants and fiber. Unlike bee honey, it’s safe for babies — and it’s vegan.”

Every month, the company, D’vash, produces about 7,000 16.6-ounce bottles of 100 percent organic date syrup at a facility in Anaheim, California. This fall, the product will go on sale on Thrive Market and Amazon, and in selected Whole Foods outlets in Southern California.

The word “Israel” appears nowhere on the label — and that’s no accident.

“As the name ‘D’vash’ indicates, our product is inspired by Israel. It has roots in the Bible,” Finkel said. “However, we also want U.S. consumers to know that we’re American-made and locally sourced, and we also don’t want to pigeonhole ourselves as a niche Israeli or Jewish product. We’ve actually gotten a lot of interest from Arabs. This has broader appeal than just Jewish or Israeli.”

Though Finkel lives in Modiin, a suburban city midway between Jerusalem and Tel Aviv, he often commutes into the Tel Aviv hub to get work done.

“Before the hub existed, people were going to cafés or working from home,” said Davis of Nefesh B’Nefesh, which has two full-time employees devoted to the hub. “But working here lifts their energy and output because they’re in a type of environment where everyone is looking to push to the next level.”

That’s why Metz, 33, says she runs her nonprofit organization, Thrivacious, from the hub. Five years ago Metz, a corporate lawyer, was diagnosed with breast cancer. She underwent a year of chemotherapy and had a double mastectomy. She also tested positive for the BRCA gene mutation, putting her at high risk for other cancers. The disease prompted her to reconsider her life priorities, and a couple of years later she moved to Israel. 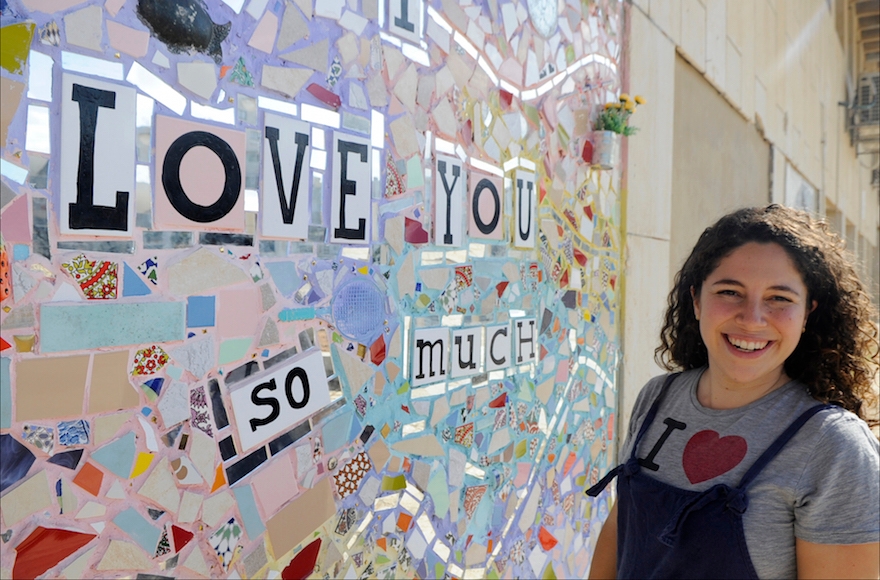 Boston-born street artist Mia Schon shows off one of her murals facing a public square near the beach in North Tel Aviv. (Larry Luxner)

“While Israel is a warm country in some ways, as a cancer survivor I felt very isolated here,” Metz said. “There isn’t a single support program in English for cancer survivors and caregivers in Tel Aviv, and very limited programming throughout the rest of the country. Yet there are thousands of English-speaking people touched by cancer who are facing their emotional trauma alone.”

To help such women, Metz organizes workshops and retreats on subjects ranging from arts therapy to self-defense training. She’s working on creating a mentorship program and a “gift box” for people in cancer treatment created by survivors for other survivors.

Metz hopes Thrivacious eventually will become a self-sustaining nonprofit. Until then, she says she appreciates the co-working hub in Tel Aviv to try to create that community.

“Nefesh B’Nefesh helped me get to Israel, but for a long time I had few connections with the organization. Eventually I opened up one of their emails with an interesting subject and read about the workspace hub,” Metz said.