Harvard honors a professor who helped its Jewish life flourish 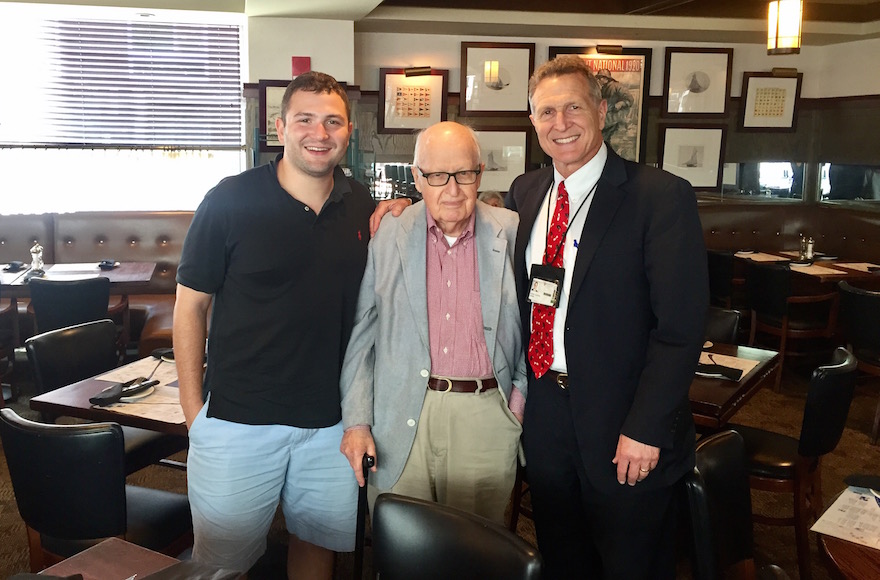 David Sackstein, left, a Harvard alumnus and now a first year student at Harvard Law School, has lunch dates with his mentor Henry Rosovsky, center, and his father, Robert Sackstein, a doctor who teaches at Harvard Medical School. (Courtesy of David Sackstein)
Advertisement

CAMBRIDGE, Mass. (JTA) — When Henry Rosovsky first arrived at Harvard University in 1949, a newly minted graduate of the College of William and Mary, the young Jewish refugee could hardly have imagined that a building associated with the Harvard Jewish community would be named in his honor more than four decades later.

Born in 1927 in what is now Gdansk, Poland, Rosovsky had immigrated with his parents to the United States when he was 13. Harvard’s quota capping the number of Jewish students was dying out, but the Jews on campus were not exactly out and loud.

“If you go back to the 1950s and 1960s, it was not taken for granted that in the forefront of a university would be a leader so forthright and unapologetically Jewish,” said Rabbi Jonah Steinberg, the Harvard chaplain and executive director of its Hillel.

But within the next decade and a half — during which Rosovsky served in the U.S. military, completed his doctorate and taught at the University of California, Berkeley, returning in 1965 to Harvard as an economics professor — he set in motion a flourishing of Jewish life on campus.

In 1978, Rosovsky shepherded the establishment of the Center for Jewish Studies, which was led for decades by Harry Wolfson, the first chairman of a Judaic studies center at an American college. The first Jew to serve on the board of the Harvard Corp., the school’s governing body, Rosovsky was a key player in paving the way for Hillel’s move from cramped quarters on the outskirts of campus to a location near the center of student life.

“He didn’t set out to trumpet his own Jewish identity,” but “by being very honestly who they are, they were an example to others,” Steinberg said about Rosovsky and his wife, Nitza, a former longtime curator of the Semitic Museum at Harvard. 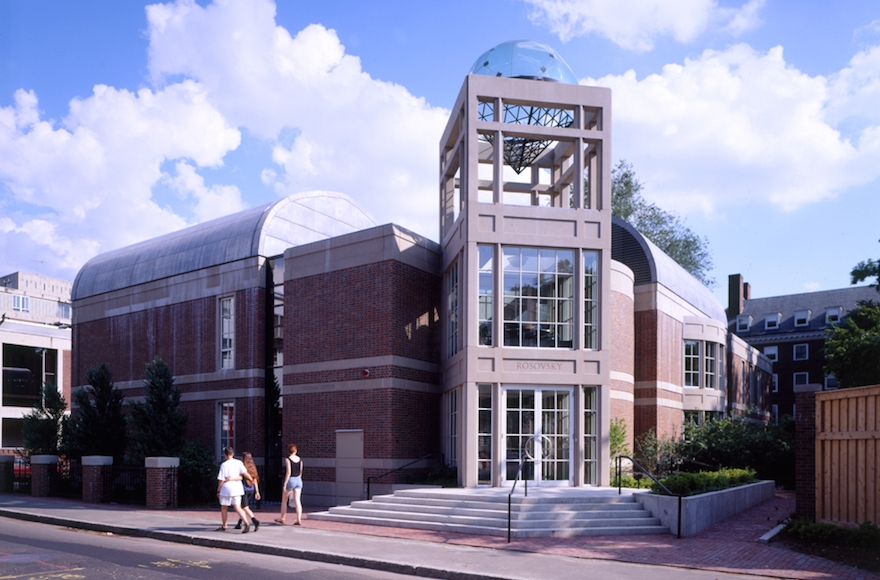 Rosovsky Hall is near the Harvard campus. (Courtesy of Safdie Architects)

The celebration kicks off a new campaign to secure the future of Rosovsky Hall and Jewish life on campus, according to a statement by the Harvard Hillel.

“Henry Rosovsky has truly been a towering figure at Harvard,” Faust said in an email to JTA. “As a student, alumnus, University Professor, dean of the Faculty of Arts and Sciences, and, twice, as acting president of the University, it’s hard to imagine a vantage point from which Henry hasn’t seen — and improved — the institution we all love so much.”

In an interview with JTA, Rosovsky — whose fields of expertise are economic history, Japanese economic growth and higher education — recalled how Rabbi Ben-Zion Gold, who led Hillel for 30 years beginning in 1958, would often talk about his desire to relocate.

“I asked him, ‘Why aren’t you happy where you are?’” Rosovsky recalled.

Gold insisted that without being closer to campus, Hillel would never gain vitality and influence.

With Rosovsky’s support, Hillel moved in 1979 to a new location on Mount Auburn Street, a block south of the main campus.

“He was absolutely right. I was wrong. It’s made a tremendous difference in terms of activity, usage and influence,” Rosovsky told JTA.

Hillel moved again, a block away, to the 19,500-square-foot Safdie building, which was dedicated in 1994. It consists of three vaulted wings surrounding a circular courtyard. The courtyard is open to the street and is designed to accommodate a sukkah.

As the building would include Orthodox, Conservative and Reform services, Safdie told JTA that he designed the glass-walled prayer spaces to be open to each other.

“Praying east, they can see each other,” he said in a phone conversation. “They might be in separate halls, but symbolically they are one.” 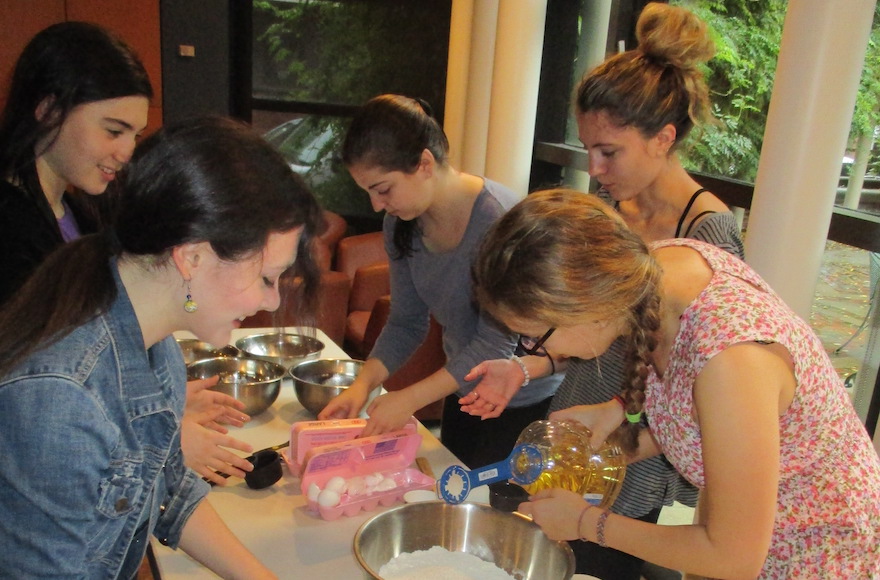 Students at Harvard Hillel baking challah to raise funds for the Harvard Homeless Shelter and the national Challah for Hunger. (Penny Schwartz)

It’s a potent symbol that resonates with Elena Hoffenberg, a 2016 alumna and former Hillel student leader. Sitting in the student lounge, it’s possible to see all three worship services at the same time.

“It’s a beautiful way the building exemplifies Hillel’s commitment to pluralism,” said Hoffenberg, who now works for the Boston-based Jewish Women’s Archive. “After graduation, it’s harder to find such a thing.”

In his decades-long Harvard career, Rosovsky served as dean of the Faculty of Arts and Sciences, and several brief appointments as acting president in the 1980s.

Rosovsky’s influence is evident beyond Jewish studies, according to Steinberg and Jonathan Sarna, a professor of American Jewish history at Brandeis University. Both pointed to his leadership in recruiting Henry Louis Gates Jr. in 1991 to lead what is now Harvard’s Department of African and African American Studies.

In 1986, on the occasion of Harvard’s 350th anniversary, Nitza Rosovsky wrote “The Jewish Experience at Harvard and Radcliffe,” a catalog that accompanied an exhibit at the museum. It traces Jewish presence on campus dating back to Judah Monis, who in the 1720s became the first Jew and first Jewish instructor of Hebrew at the college. At the time, Harvard required its instructors to be Christian; Monis converted to Christianity in a public ceremony.

The catalog also notes the formation of the Menorah Society, the Jewish student group that was a precursor to Hillel.

It’s a history that includes a well-known period of discrimination in the 1920s, when Harvard used the quota system to restrict admissions for Jewish students. But Rosovsky puts that in historical perspective and points out that Harvard was not alone among higher education institutions in imposing the quota. According to Hillel International, Harvard currently has 803 Jewish students among 4,326 undergrads, nearly 20 percent, with about the same percentage of graduate students.

Steinberg said the Harvard Hillel is sponsoring a new printing of the catalog. A timeline of Jewish life on the campus based on the catalog has been created for the anniversary event with updated material gathered by Hoffenberg, who worked with Nitza Rosovsky and dug deep into the Harvard archives to find posters and other archival records of Harvard Hillel.

On a walk around Harvard Yard, Hoffenberg pointed out a large linden tree planted in 1990 in honor of Harvard’s German Refugee Scholars who had come to the campus as part of the college’s program to aid German students during the Nazi era.

On Friday night, hundreds of freshmen and their parents mingled in Rosovsky Hall for the freshmen family Shabbat gathering. Following the three separate religious services, students and guests shared a meal in the kosher dining hall, with an overflow crowd seated at tables in the student lounge.

Among those at the gathering was David Sackstein, a 2014 Harvard graduate who is now at the university’s law school. Sackstein has developed a close relationship with Rosovsky, who he fondly calls his “Harvard zayde,” or grandfather.

As an active member of the Harvard Hillel’s board of directors, Rosovsky has provided Hillel student leaders perspective on an array of issues that at times can be controversial, Sackstein told JTA, including navigating the often contentious Israeli-Palestinian conflict. Rosovsky taught him and others to focus on their mission and values.

Rosovsky Hall reflects its namesake, Sackstein said, as an embassy for the Jewish community at Harvard, open to a diverse cross-section of Jewish students and faculty.

“To have that space,” he said, “the dining hall that is open to all, and to have programs that are far reaching means that we have cross-cultural dialogue and educational opportunities in everything we do.”