Why did a congressman give a Holocaust denier a ticket to the State of the Union? The guest was polite. 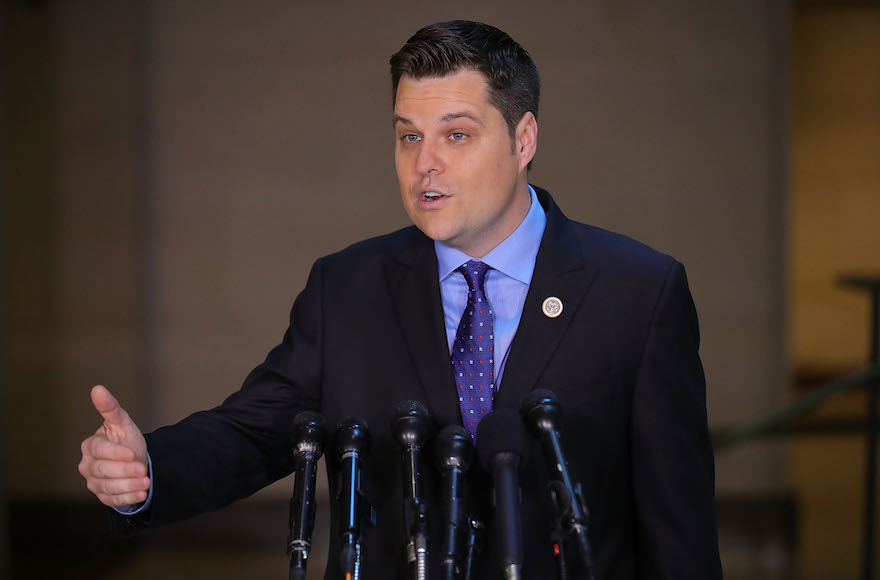 WASHINGTON (JTA) — A Republican congressman says he gave Chuck Johnson, a notorious right-wing troll who once denied the Holocaust, a ticket to the State of the Union because he seemed polite.

Johnson has been banned from numerous platforms for his online “trolling,” or harassing those with whom he disagrees. He has said he believes in racial differences, and on at least one occasion denied the Holocaust.

Politico reported that Johnson heard that a ticket reserved for the father of Rep. Matt Gaetz of Florida was available because Gaetz’s father, a Florida state legislator, had fallen ill. Johnson went to Gaetz’s office and introduced himself, and talked his way into getting the ticket.

Gaetz said a staffer googled Johnson after he had the ticket and discovered his notoriety. The congressman also said that Capitol Police asked to speak to Johnson when Gaetz’s office was clearing Johnson’s information through security. (He said he did not ask Capitol Police why they wanted to speak with Johnson.)

Neither incident led Gaetz to consider whether he should pull Johnson’s ticket to the State of the Union, the rare event that brings the U.S. government under a single roof.

“Unquestionably I don’t agree with everything Chuck Johnson has said and done,” Gaetz said. “That needs to be said on the record. But he was a perfectly polite guest.”

Gaetz, speaking on the Fox Business Network, also denied that Johnson had denied the Holocaust.

“Some of the claims against Mr. Johnson are not accurate,” he said in an interview captured by Mediaite. “He’s not a Holocaust denier, he’s not a white supremacist. Those are unfortunate characterizations of him, but I did not know he was as perhaps as infamous and controversial as he was when he came by to my office. … He was a polite and just entirely appropriate guest I thought.”

Johnson denied the Holocaust in an “Ask Reddit” session from January 2017. (The sub-Reddit that hosted the session, “altright,” has since been banned by Reddit because its members practiced “doxxing,” publishing personal information about enemies — a practice that Johnson has indulged and which contributed to his notoriety.) The exchange has been captured elsewhere, including here at the Little Green Footballs blog.) He also praised Holocaust deniers like David Irving and David Cole.

Asked about the “Jewish Question” and the Holocaust, Johnson replied, “I do not and never have believed the 6 million figure. I think the Red Cross numbers of 250,000 dead in the camps from typhus are more realistic. I think the Allied bombing of Germany was a war crime. I agree with David Cole about Auschwitz and the gas chambers not being real. I read the German War (highly recommend), Bloodlands, Mein Kampf, and all of David Irving.” He added: “But I support Israel as a Jewish state and Zionism as a concept. I’m pro-ethno state, generally.”

The Anti-Defamation League is not accepting the excuse that Gaetz was caught unaware.

“Any measure of due diligence by you or your staff would have revealed that Johnson is an extremist and a Holocaust denier,” the ADL’s national director, Jonathan Greenblatt, said in a letter sent Thursday to Gaetz. “Your inattention — or uncaring attitude — about Johnson’s record of bigotry and harassment is shocking.”