Post-Parkland activism shows teens don’t need our praise. They need a place at the table. 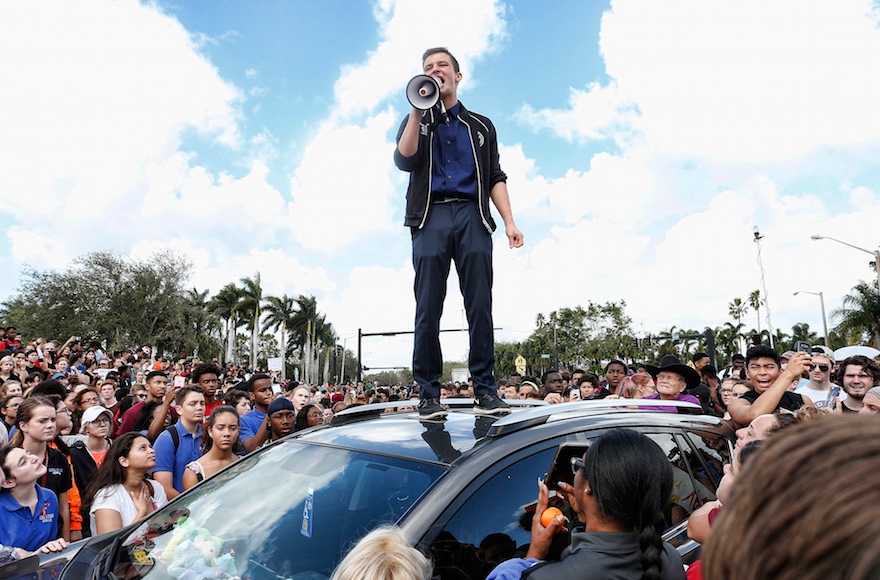 (JTA) — In the aftermath of the fatal mass shooting in Parkland, Florida, the Jewish community should take note: Teenagers are not just the future of the Jewish people; they are the dynamic force driving social change today.

Today we are witnessing history unfold as the American teenage populace is mobilizing. This moment will be recorded as one in which adolescents were the catalysts for societal change – and they will keep fighting because they know that they are on the right side of history.

The irony should not be lost here. Generation Z (teens born post-2000) are often described as the most narcissistic, materialistic generation that the world has ever known. They are referred to as “the iGeneration” and “the Selfie Generation.” Their addiction to electronic devices has been well documented, and with it the social deficits that this addiction brings.

Those of us who study and work with today’s youth know all too well that despite the alleged self-indulgence of this generation, its members have repeatedly demonstrated that they are committed to social and political change. And now the spotlight is firmly on them — and it’s their time to shine.

Those who mistrust the influence of technology fail to truly understand these youth. For today’s youth, technology is not what they do; it is who they are. The smartphone and its apps are an extension of their lives. And social media, in all of its variations, enhances their social life and amplifies their engagement with the world.

After the tragedies of Parkland, and Sandy Hook, and Columbine, and too many others to name, it is time to allow today’s youth to fix what we could not. Our role as adults must be to empower our young to take control of the conversation and ensure that policymakers hear their voices loud and clear.

On a recent webinar sponsored by The Jewish Education Project and 12 major Jewish organizations serving youth, 450 educators tuned in live as Saralyn Lerner — a Jewish high school senior from Boca Raton, Florida, who helped organize a sit-out at her school in the days following the shooting at Marjory Stoneman Douglas High School in Parkland – issued the following call to action:

The best thing you can do is instead of simply just empowering your teens and allowing them to do the things they have been asking — like these marches and these sit-outs and these walkouts and these protests — [is to] actually take part in them. You, as Jewish educators, you are the ones who taught us how to fight for what we believed in, whether you’re our teachers, whether you’re our rabbis, whether you’re our cantor at our synagogues — we looked up to you. It’s your generation that put these ideas in our heads of how we can use our own voices and we’re doing exactly that. But we need your help because a generation of teenagers, as much as I’d like to hope that we could, we’re not taking over the world. We’re starting a movement, and every movement has its leaders, every movement has its followers. And on this movement, the Jewish educators … also are the leaders of this. You’re telling us since we were kids, that we need to speak for ourselves, that we need to protect, that we need to respond to one another, you showed us that way, and the only way that these peaceful protests and that change is going to happen is if you keep showing us those right ways.

Over the next weeks and months, The Jewish Education Project will be offering guides and resources for organizations who want to elevate the voices of teenagers within their communities. With encouragement from rabbis, education directors and other Jewish professionals, we will encourage teens to raise their voices in congregations and communities across the country, particularly on Shabbat HaGadol (The Great Shabbat), March 24, the Shabbat before Passover that for centuries has been set aside as a day for communal rabbis to deliver major sermons. This year, Shabbat HaGadol coincides with the March For Our Lives gun control demonstrations throughout the U.S. led by American teens. Through an initiative called Generation Now Voices, The Jewish Education Project will invite, collect and disseminate teen sermons that speak to the issues of our time, spark debate and inspire change.

On a personal level, as a recently naturalized American citizen, I urge every adult to offer teenagers the resources and transportation — and if need be to act as chaperones — so that they can show up to demonstrate. I would also urge every nonprofit organization to consider including teenagers on their boards as active voices and decision-makers, particularly if their voices can provide important or missing perspectives. I encourage every gathering, conference and demonstration, no matter what the issue, to find an impassioned teen to speak to that issue. In the weeks leading up to March 24 and beyond, I urge all clergy to yield their pulpit to a teenager in their congregation.

These steps are not lip service. They are recognition that today’s teenagers have something fiercely real to say; that they are here and that they have a voice worth hearing. These steps also reflect our recognition that we adults might not have all the answers, and that sometimes we might be best served in actively withdrawing to offer those better suited to fill that space.