What is Israel doing hosting a world lacrosse championship? 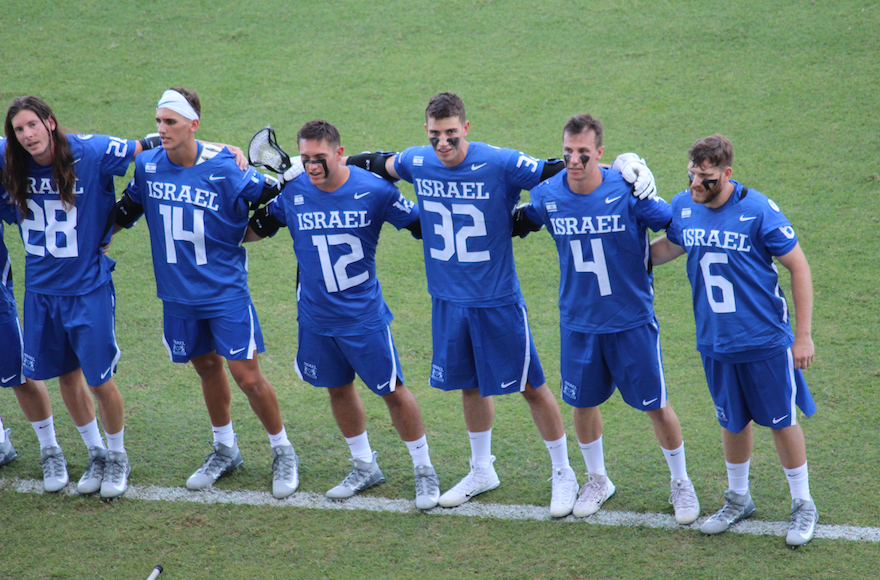 Prior to its opening game as the host of the World Lacrosse Championship, a win over Jamaica, Israel’s players swayed as “Hatikvah” was played; after, they celebrated. (Hillel Kuttler)
Advertisement

NETANYA, Israel (JTA) – Scott Neiss got the good news in an email in April 2017.

“Congratulations. More details to follow. Pat on the back,” read the message to Neiss, the Israel Lacrosse Association’s executive director.

A Federation of International Lacrosse official was notifying Neiss of the success of his whirlwind, nine-day campaign to bring the 2018 World Lacrosse Championship to Israel after the selected host, Manchester, England, dropped out due to financial challenges.

The Israeli and American lacrosse federations jumped in. The seaside town of Netanya won out over the University of Delaware’s campus in part, Neiss said, because it is closer to the European nations constituting the majority of the federation’s membership.

Fifteen months later, 45 foreign delegations have gathered at the Wingate Institute sport complex here to compete in a game developed by Native Americans and made popular in prep schools and elite colleges in North America before catching on around the world.

Israel’s hosting of the world championship is a remarkable achievement for a country where lacrosse was only introduced by the New York-reared Neiss and other Americans in 2011.

“In a normal bid process” – five years – “no way we get it,” Neiss said Wednesday evening as he watched Israel, ranked seventh in the world, take on No. 4 Australia. (Israel lost, 9-6, and will finish the tournament between fifth and eighth place.)

The event, which runs through Saturday, is “an amazing opportunity to establish lacrosse as a game of the future for Israel,” said Phil Pearson, the referee in chief and a resident of Manchester.

Many see Israel as a wise selection, a reward for its innovative approach to cultivating the sport – and, perhaps, producing a replicable model for other countries new to lacrosse. Rather than enlist top American Jewish players as ringers to represent Israel in tournaments only to see them disperse, Neiss and Chief Operating Officer David Lasday cultivated local talent. The game, after all, combines elements of two sports already popular here, basketball and soccer. Playing on an outdoor field, players pass and catch a hard rubber ball in the basket of an aluminum or alloy stick, and score by whipping the ball into a 6-foot-square goal.

Half of the 22 American members of Israel’s team competing in the championships actually live in the Jewish state. Co-captains Seth Mahler and Jacob Silberlicht have each been here about five years. Mahler lives in Tel Aviv and works as the Israel Lacrosse Association men’s program director and as the under-19 team’s coach. For three years he developed the lacrosse youth program in Ashkelon.

Silberlicht lives in Ashkelon with another national team player, Chris Friedman, and the two coach programs in adjacent areas of the Negev: Silberlicht in Shaar Hanegev, Friedman in Sderot. Silberlicht served in the Israeli army, as did Matt Cherry, a coach who lived in Israel for three years before returning to America.

“For a newer nation to be the host country is exciting,” Kyle Baker, 30, an American playing for his mother’s homeland of Belgium, said Wednesday at the Wingate Institute, the site of nearly all the tournament’s games. He said Israel’s selection “wasn’t too surprising because I was aware of lacrosse’s growth and development [here].” 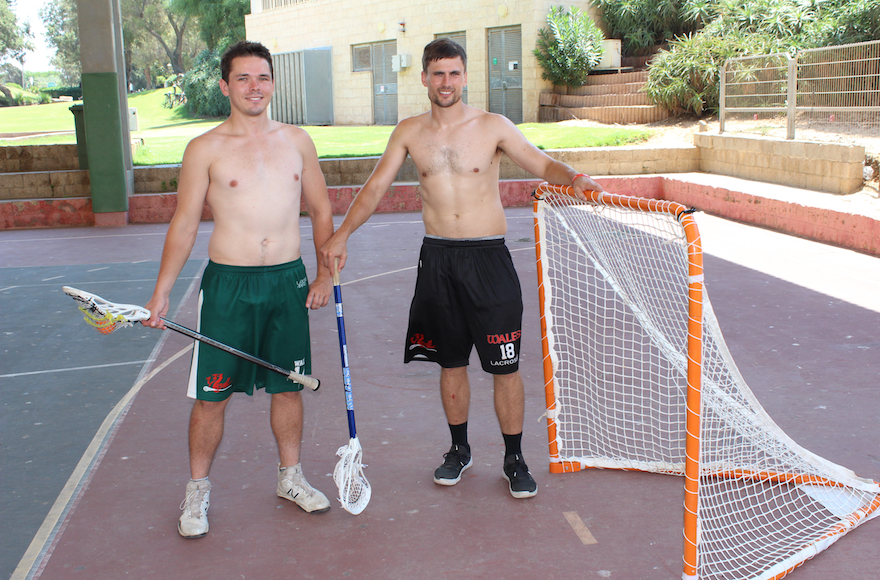 “The way Israel has done it, I think, is the right way,” said Chris Turner of Abergavenny, Wales. In Hungary, by contrast, which hosted a European championship, the host club consisted primarily of Americans, but the players returned to the United States without passing along their knowledge and experience to Hungarian children, he said.

“They didn’t give back, and they’re not developing,” Turner said. “Israel’s building from the grass roots, and it’s coming through.”

Turner’s teammate, Josh Yeoman, was impressed by how young Israelis grasped their lacrosse sticks at a Wales game here. Another time, at the edge of Wingate’s village green, he watched approximately 25 kids pass the ball to one another.

“When those kids grow,” Turner said, “[Israel’s team] will have a really strong core.”

The lone native Israeli competing on the national team is Ori Bar David, 18. At a world championship a decade or so from now, Bar David said, he hopes that “all the players will be native Israelis.”

The Americans are teaching Israelis lacrosse in afterschool clinics, gym classes and formal programs. Lidor Ashtamker, a 17-year-old in Ramle, was enticed unconventionally three years ago when a lacrosse-themed video game was shown being played on the television series “Teen Wolf.” The next day at school, two American visitors held lacrosse sticks.

That afternoon, Ashtamker attended a lacrosse practice. He passed, caught, even fielded ground balls having never before used lacrosse equipment.

By his senior year of high school, Ashtamker was teaching lacrosse fundamentals at Ramle elementary schools with their principals’ permission.

“I felt like I found what I wanted to do in my life,” he said.

That’s music to the ears of Marcelo Burdman, Ashkelon’s director of sports development, who once taught physical education.

Approximately 120 boys and girls play on youth teams in Ashkelon, making lacrosse second only to basketball, he said.

“Today, lacrosse is part of the sports activity of the city,” Burdman said. “[The Americans] have succeeded in making the sabra generation play. You can say it’s like a plant — lacrosse has roots.”