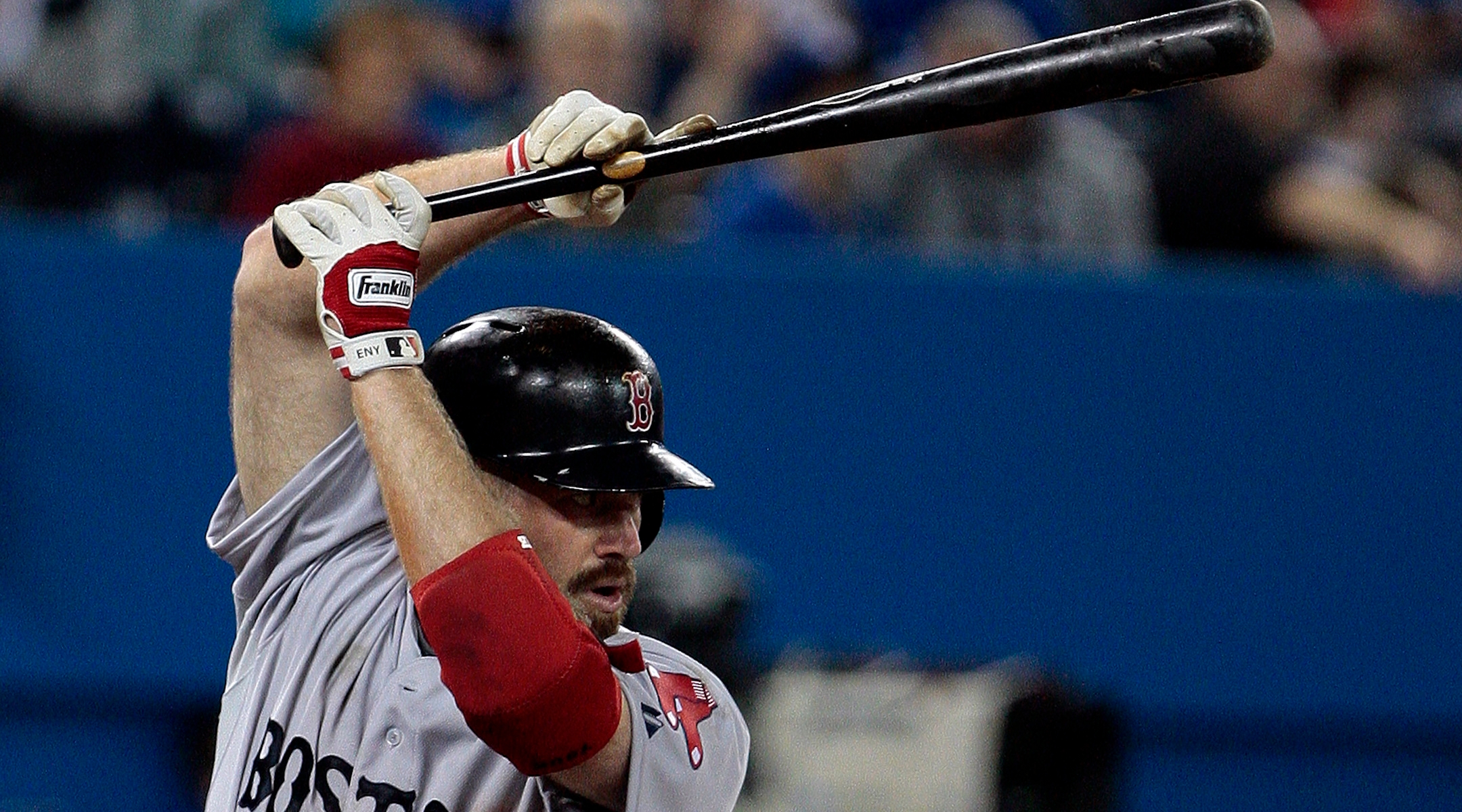 Kevin Youkilis, shown here with the Boston Red Sox in 2012, was known for his unorthodox batting stance as well as strong hitting and stellar fielding. (Brad White/Getty Images)
Advertisement

(JTA) — What is more difficult to fathom: that former Jewish Major Leaguer Kevin Youkilis has been retired for five years or that his name appears on the current Hall of Fame ballot?

“Youk” made his big-league debut with Boston in 2004. Two years later, the team won the World Series for the first time since 1916.

He might be best known for having one of the sport’s most unusual batting stances, but despite his less-than-Adonis-like physique he was a three-time All-Star who finished in the top 10 for American League MVP voting twice. His best season came in 2008 when he had 29 home runs, 115 runs batted in and a .312 batting average, winning the Hank Aaron Award, created by Major League Baseball to honor the best hitter in each league.

He was quite good with the glove, too. Originally a third baseman, Youkilis won a Gold Glove at first base in 2007, setting an A.L. record by playing 135 consecutive error-less games and becoming the first qualifying first sacker in league history to compile a 1.000 fielding percentage.

Youkilis, who was plagued with back problems over the last several years of his career, also appeared briefly with the Chicago White Sox and New York Yankees. His last professional season was served overseas with the Tohoku Rakuten Golden Eagles in the Japanese Pacific Coast League. He was just the second Jewish player in Japan (Richie Scheinblum was the first).

Unfortunately, that batting stance won’t get him a plaque in Cooperstown. Although he ranks seventh all-time among Jewish Major Leaguers in home runs (150); seventh in RBIs (618); seventh in runs scored (653); and ninth in hits (1,053), none of those stats are Hall-worthy. So Youkilis — who appears on this year’s ballot with 34 other candidates – probably will not get the needed 5 percent of the vote that would allow him to remain on the ballot in 2020.

According to family legend, Youkilis’ ancestors originally came from what is now known as Romania but moved to Greece to escape religious persecution. Comedian Denis Leary was visiting the Boston Red Sox broadcast booth in 2006 when he knelled about Youkilis’ background..

“That’s fantastic,” he said. “That’s one bottle of whiskey away from being Irish Catholic. They got the Manischewitz, we got the Jameson’s. It’s the same guilt, the same bad food. That’s fantastic. We got a Jewish first baseman!”

The only Jewish players in the Hall of Fame are Hank Greenberg and Sandy Koufax, who turned 83 on Dec. 30. (There is some controversy over the religious identity of Lou Boudreau, a stellar shortstop and manager from the late 1930s to the early 1950s.) Barney Dreyfus, owner of the Pittsburgh Pirates in the early 1900s and “father” of the modern World Series, was inducted into the Hall in 2008.

(Ron Kaplan is author of “Hank Greenberg in 1938: Hatred and Home Runs in the Shadow of War” [Sports Publishing, 2017] and host of the award-winning Kaplan’s Korner on Jews and Sports.)