Can anyone beat Benjamin Netanyahu? 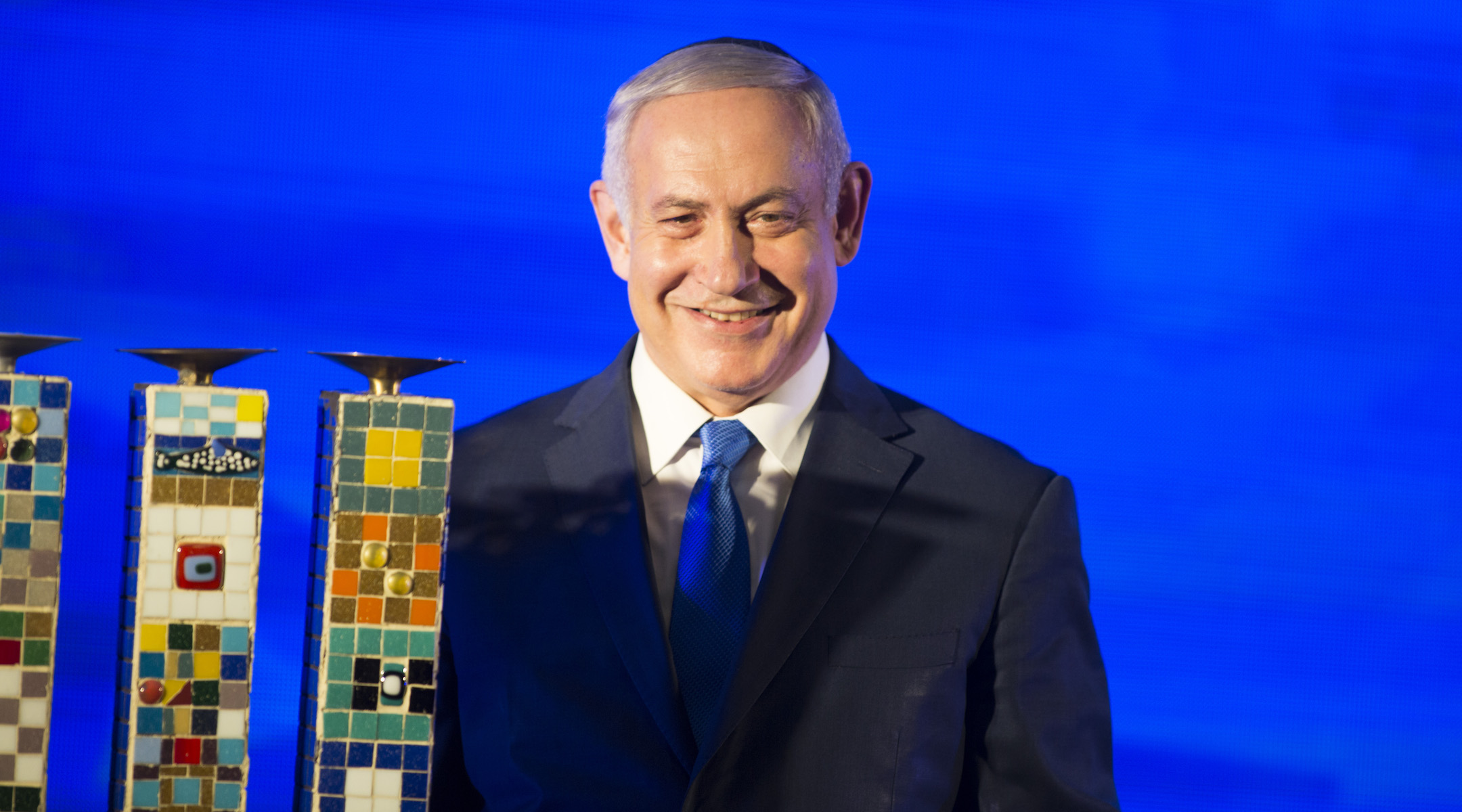 (JTA) — Israeli police want him to be indicted in three separate corruption cases.

He’s embattled from left and right for his attacks on Gaza and his policy in the West Bank. He’s made a point of cozying up to controversial right-wing nationalist leaders, from Brazil’s Jair Bolsonaro to Hungary’s Viktor Orban — and especially to President Donald Trump. Many American Jewish leaders say his policies are driving away Diaspora Jews.

And if the upcoming Israeli election were to be held today, Prime Minister Benjamin Netanyahu would almost definitely win for the fourth time in a row. Probably in a landslide.

Why? In a sentence, it’s because enough Israelis trust him with their security. To his voters, everything else is commentary.

“They think that if he may have received bribes or played with Israel’s telecom market to have personal gain, this has nothing to do with the way he confronts Iran or the way he handles things in Syria,” said Israeli political journalist Tal Schneider, referring to some of the corruption allegations against Netanyahu.

“I think in Israel, you win elections on security issues only,” she said. “It’s very easy to speak to people’s fears because in Israel, fears are real. It’s in people’s lives on a daily basis.”

Polls ahead of the April 9 election have Netanyahu’s Likud party holding a wide lead over a growing group of competitors in the opposition. Likud is slated to win around 30 seats in Israel’s 120-seat parliament, the Knesset, putting Netanyahu in the best position to form a ruling coalition. His closest opponents would get half that number.

Netanyahu’s international critics — the United Nations, the European Union, the former Obama administration, liberal American Jewish groups, leading liberal newspapers — have portrayed him as too aggressive in Gaza, too cavalier with the lives of Palestinian civilians and unwilling to make peace with the Palestinian Authority. That’s not to mention the protests over his policies on African asylum seekers, religious pluralism in Israel or the status of Arab Israelis.

But in Israel, polls show that most Jews think Netanyahu is not aggressive enough in Gaza. In November, his defense minister resigned, complaining that Netanyahu was too risk-averse in deploying the military. When it comes to the army, his centrist rivals have only tried to talk tougher than the prime minister.

In 2014, following a war in Gaza that saw Israel pilloried in international forums, a left-leaning group of former generals praised Netanyahu for his “level-headed leadership.” Jewish Israelis tend to see their fighting in Gaza as a necessary response, not a war of choice.

On the diplomatic front, both Israelis and Palestinians have despaired of any hope for a peace accord anytime soon. The other topics — from minority rights to religious policy — generally don’t even register as election issues in Israel.

“Security is pretty much always the number-one issue for Israeli voters, and it comes before the diplomatic front when Israelis rank their priorities in polls,” Lahav Harkov, a senior contributing editor for The Jerusalem Post, wrote to JTA. “He keeps the focus on security and his credentials as an expert on that front, as much as possible.”

It’s true that two former Israeli generals, both chiefs of staff, have founded new parties this year specifically aiming to oppose Netanyahu. But so far, neither is attacking Netanyahu directly on security issues. Moshe Yaalon, one of Netanyahu’s former defense ministers, said his party would represent “the good, values-based, clean-handed land of Israel.” Benny Gantz, a former general, has only begun to open up about his platform. In a television interview Thursday, he said he would leave several West Bank settlement blocs in place but that an agreement with the Palestinians would bolster Israel’s security.

A chorus of other candidates has also failed to match him at the polls. Yair Lapid, a one-time news anchor and finance minister who leads the centrist Yesh Atid party, has a strong base but hasn’t been able to broaden his appeal. The once-robust Labor Party, headed by former telecom executive Avi Gabbay, is mired in the single digits.

If anything, the multiplicity of new parties may only help Netanyahu by fragmenting his opponents. The past few elections have seen several new parties spring up, all competing for the same bloc of voters. Meanwhile, the right has remained relatively united around Netanyahu’s leadership.

Netanyahu’s opponents say the only way to beat him is by joining together. Ehud Barak, Israel’s most recent left-wing prime minister, said Netanyahu would be defeated only “if, in the center-left camp, a bloc comes together.” He called for Yaalon, Gantz and several other opposition parties to unite. But only the opposite has happened: A center-left alliance, the Zionist Union, split in dramatic fashion this week.

Netanyahu’s main problems of late have been the potential indictments against him and a growing aura of corruption. Former Prime Minister Ehud Olmert (he ended up going to prison) resigned even before police recommended that he be indicted. But that has already happened for Netanyahu and he shows no signs of backing down. He has vowed to remain prime minister even if he is formally charged with a crime.

Will that cost him the election? Probably not, Harkov said. Netanyahu frequently demonizes the Israeli press (and, like Trump, often claims that negative articles are “fake news”). At this point, Harkov said, Israelis are just tired of the back-and-forth. Netanyahu’s opponents, as well as government watchdogs, have called his decisions dangerous to Israel’s democracy. But if Israelis are feeling squeamish, it isn’t showing in the polls.

“There’s so much news about Netanyahu’s investigations that they don’t take it seriously anymore,” Harkov wrote. “Yes, there are corrupt politicians who go to prison, but enough people seem to be willing to shrug the latest things off as just champagne and cigars or point to the incessant leaks to the media as a sign of bias by both the press and the police.”

Netanyahu’s last election campaign, in 2015, also was plagued with scandal — though he was not indicted. Leading up to Election Day, it appeared he could lose. But he pulled off a comeback victory, emerging in a stronger position than before. And the longer he stays in power, Schneider said, the more inevitable his victories seem. In Israel, there are no term limits.

“The people of Israel don’t see anyone else in Israel who can do it,” she said. “With the time passing, he’s getting stronger and stronger because when you sit in that chair, you’re the incumbent. You can use all the facilities to keep promoting yourself.”