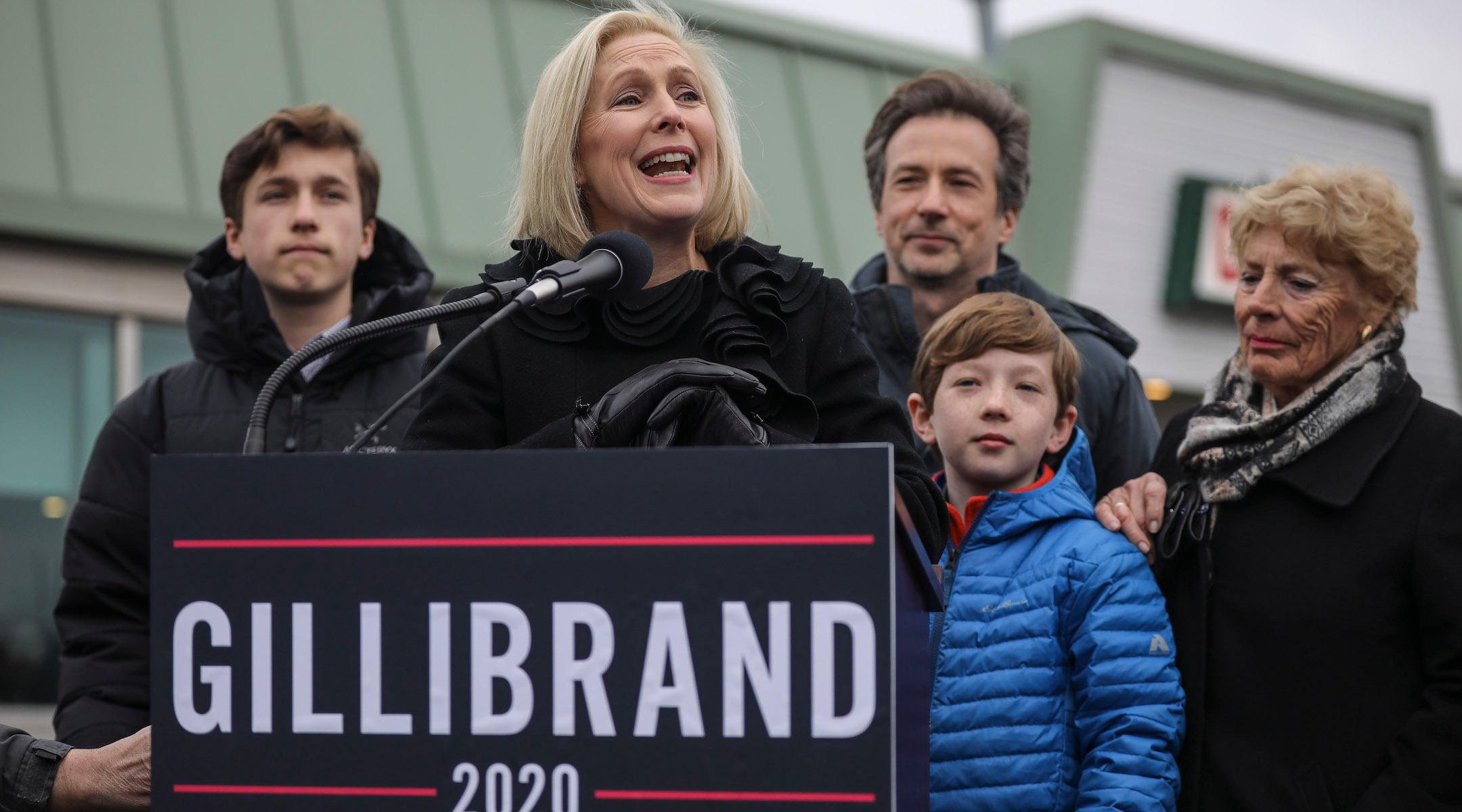 Surrounded by her family, Sen. Kirsten Gillibrand announces that she will run for president in 2020 outside the Country View Diner in Troy, N.Y., Jan. 16, 2019. (Drew Angerer/Getty Images)
Advertisement

Like Kirsten Gillibrand 1.0, the latest model was earthy and down to brass tacks in her appearance Jan 15. on Stephen Colbert’s late night show on CBS.

The New York senator, 52, joked and mock-flirted with Colbert.

“Do you have anything to announce?” the host asked, and she replied “Yes!” She placed her hands on his before announcing her bid for the presidency.

[UPDATE: She made it official on March 17, tweeting “I’m running for president. Let’s prove that brave wins.”]

Part of her message included the fix-the-pothole ethos that was the trademark of her first political boss and predecessor as a U.S. senator, Al D’Amato, a Republican: Her priorities, in order, were health care reform, better schools and job training.

What may have surprised Gillibrand was how far left she had moved in 14 years.

“You are never going to accomplish any of these things if you don’t take on the systems of power that make all of that impossible, which is taking on institutional racism, it’s taking on corruption and greed in Washington, taking on the special interests that write legislation in the dead of night,” she said. “And I know that I have the compassion, the courage and the fearless determination to get that done.”

Despite her launch as a D’Amato intern, Gillibrand had long been solidly Democratic when she ran in ’06 for a Republican-held seat. A lawyer, she had volunteered for and raised funds for Hillary Clinton’s Senate campaign. But she also hewed very much to the center if not the right of her party, embracing gun rights and accepting special interest money.

She was no stranger to the corporate world: One of her legal gigs was representing Philip Morris in the many actions brought against Big Tobacco in recent decades. In 2018, after years of taking cash from interests including the pharmaceutical, real estate, agribusiness and entertainment industries, Gillibrand joined other Democrats in swearing off corporate political action committee donations.

D’Amato has noted her political evolution. In a 2014 Time magazine paean to his former intern, he wrote, “Don’t ever underestimate her” and said she would be a “great president.” But last year, D’Amato derided her as an opportunist.

“The Kirsten Gillibrand of today is unrecognizable to the person who interned for me or even the person who served in Congress — she has abandoned New Yorkers in her pursuit of her presidential ambitions,” he said.

Few believed Gillibrand in 2006 would swing a Republican district, yet she ousted an incumbent. In 2009, when New York Gov. David Paterson named Gillibrand to fill the seat vacated by Clinton to become secretary of state, New York pols and hacks derided her as a seat-warmer, an unserious person who would bow out in time for the 2010 special election. Instead, Gillibrand cultivated relationships with the party bosses, chief among them President Barack Obama, and an array of heavyweights considering a run bowed out instead.

Here’s the Gillibrand story as seen through the Jewish (and non-Jewish) folks who are fans, not fans and unsure about her.

Gillibrand made two fast Jewish friends in her first year in the House in 2007: fellow neophyte congresswoman Gabby Giffords, D-Ariz., and Debbie Wasserman-Schultz, D-Fla., in her second term.

Wasserman Schultz and Gillibrand flew to Giffords’ side after the congresswoman was shot in the head in a deadly attack in a suburban Tucson strip mall. They sat vigil at her bedside and were present when Giffords first showed signs of consciousness.

Another fan is Susan Turnbull, the former chairwoman of the Jewish Council for Public Affairs, who was a senior adviser to Gillibrand during her career in the House. She is not yet endorsing Gillibrand — Turnbull, the former vice chairwoman of the Democratic National Committee, is close to a number of potential nominees — but she told JTA in an interview that she is infuriated when Gillibrand is derided as opportunistic.

“She’ll admit to early mistakes and changes in her viewpoint because she is growing and has grown,” Turnbull said.

“Gabby Giffords was one of Kirsten’s closest friends in the House of Representatives, so yes, Kirsten’s views on guns have evolved over time,” Turnbull said.

Transitioning from opposing gay marriage to leading, as a member of the Senate Armed Service Committee, the repeal of the military’s “don’t ask, don’t tell” policy on gays?

“Our nation’s opinions on same-sex marriage have changed,” Turnbull said.

Gillibrand campaigned last year in Maryland for Turnbull’s failed bid for the lieutenant governorship. Turnbull calls her friend “fearless and tireless” and remembers how, when she worked for Gillibrand in the House, the very pregnant congresswoman ended a full day in the office and started a nine-hour shift in committee, departing to a standing ovation when she left to go into labor.

“She was one of the first women who gave birth while she was a member of Congress,” Turnbull said. (In fact, 10 congresswomen, all from the House, have given birth while serving.)

“Out of the spotlight” is an interesting way to describe Gillibrand’s ubiquity on late night comedy and on cable news, but Stewart might be forgiven — he was a lead advocate for medical assistance for 9/11 first responders, which Gillibrand helped ensure.

Her critique of Al Franken cost her support.

Gillibrand has been consistent in advancing protections for women from sexual assault and harassment, particularly in the military. So it was a no-brainer for her, her friend Turnbull said, to take the positions she did when the #MeToo movement exploded in late 2017. These included calling on her friend, Sen. Al Franken, D-Minn., to resign when multiple women accused him of inappropriate behavior, and saying that in retrospect, Bill Clinton should have resigned when his affair with an intern, Monica Lewinsky, came to light during his presidency. 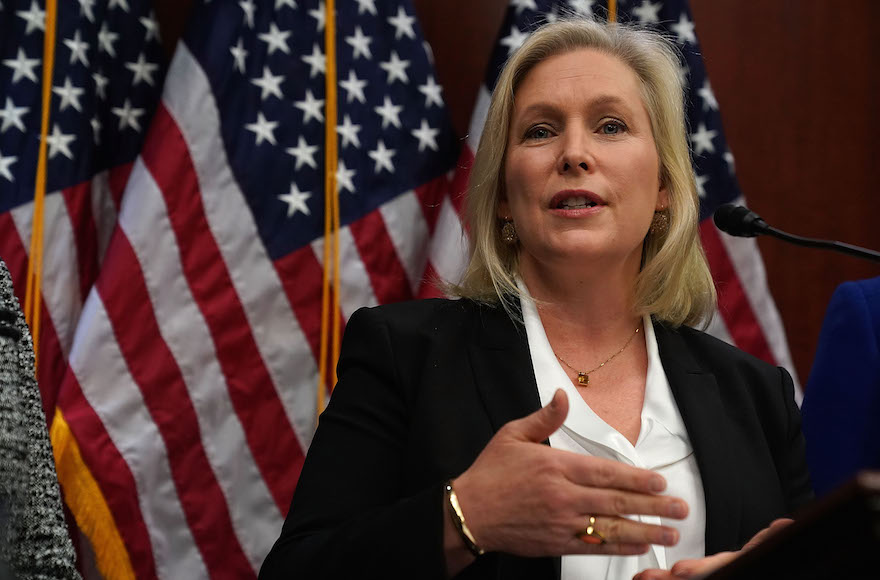 Gillibrand’s call-outs made headlines. In November, Politico quoted an array of donors as saying that the ousting of Franken, a potent critic of President Trump, would cost Gillibrand their support. One of those is George Soros, the Jewish megadonor.

Gillibrand’s response to her critics at the time: “Silencing women for the powerful, or for your friends, or for convenience, is neither acceptable nor just.”

On Wednesday morning, standing in the New York cold to deliver the more formal announcement of her run, she said, “My job was not to stay silent.”

Franken has not commented on Gillibrand’s role in his resignation, which made headlines. Turnbull, who also knows Franken, said the blame-Gillibrand crowd was fueled by sexism; it was Franken’s decision alone to resign; and it was likely inevitable given the political climate. Blaming Gillibrand, Turnbull said, was sexist.

One of the most startling and vicious attacks on Gillibrand came from Philippe Reines, a longtime top adviser to the Clintons, after Gillibrand told The New York Times in November 2017 that Bill Clinton should have resigned.

“Over 20 years you took the Clintons’ endorsements, money and seat,” Reines said. “Hypocrite. Interesting strategy for 2020 primaries. Best of luck.”

Her dinner with Chuck

Gillibrand’s senior senator in New York is Chuck Schumer, the Jewish minority leader and a nuts-and-bolts Democrat. He is meticulous about including her name in news releases touting the federal spending (on infrastructure, sewage systems and preschools) that get senators re-elected. In 2017, Schumer slammed Trump as “nasty” for making a gross insinuation about Gillibrand after the junior senator called on the president to resign because of sexual misconduct allegations.

Like Schumer, Gillibrand understands the importance of Orthodox Jewish politicking in New York: She led a call in 2017 to double security funding for religious institutions, and the year before called on the Department of Agriculture to provide kosher offerings at food banks.

Schumer mentored Gillibrand when she first came to the Senate, and they put on a buddy-buddy act for a lengthy New York magazine profile in 2009.

“One of the things I like about Kirsten is I can tell her when she’s doing things wrong,” Schumer said. “She takes it well.”

Is she listening now? Not on Israel issues, where Schumer still trends hawkish, and Gillibrand has, as she might say, evolved. She has grown more critical in recent years, chiding Prime Minister Benjamin Netanyahu in 2017 for not having a “plan for peace.”

She also pulled her sponsorship from a bill that Sen. Ben Cardin, a Jewish Democrat from Maryland, had initiated that would establish penalties for commercial enterprises that join the boycott Israel movement. Schumer, in a rare move for a party leader, co-sponsored the bill.

But Gillibrand heeded calls from the civil liberties movement, which said the bill infringes on speech freedoms. Her exit deflated Democratic support for the bill and it never passed.

Schumer, notably, did not endorse Gillibrand once she announced.

“I work very well and closely with Senator Gillibrand,” Schumer told The Washington Examiner. “But I’m not mixing in the presidential political game right now.”

And he didn’t appear to be playing favorites among the growing list of candidates. 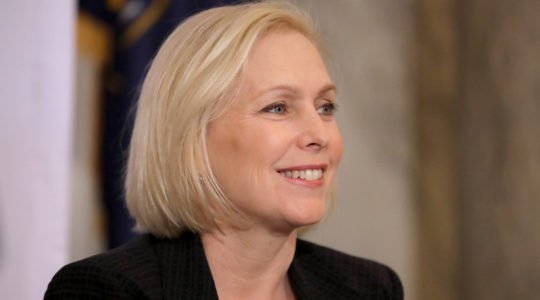