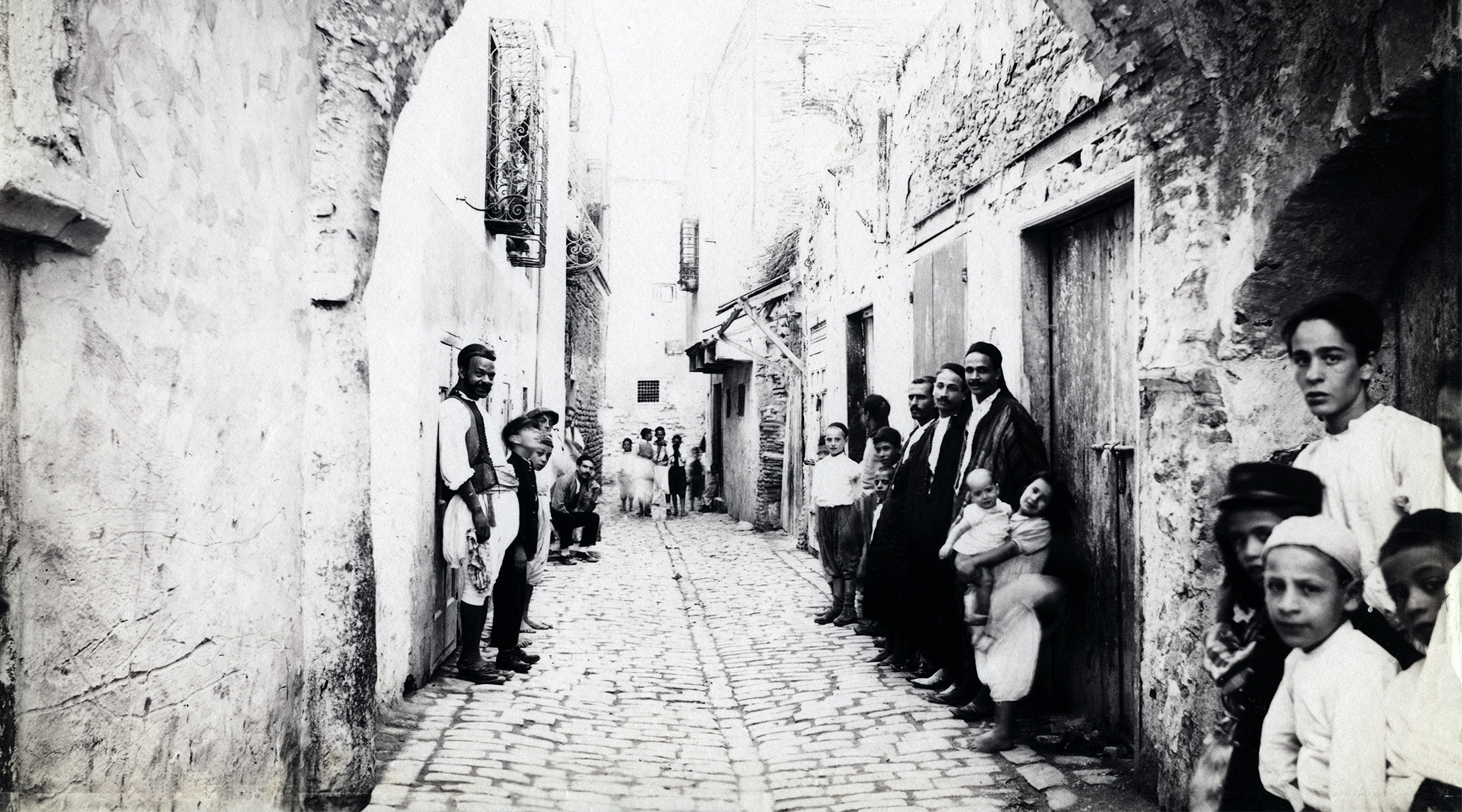 A street of the Jewish area in Tunisia, 1880 (adoc-photos/Corbis via Getty Images)
Advertisement

TEL AVIV (JTA) – One evening as a child in Petach Tikvah, I was in my room listening to the Iraqi Jewish singer Salima Mourad when a siren pierced the air. I rose from my bed and stood in silence.

The siren marked the start of Yom Hashoah, Holocaust Remembrance Day. I was trying hard to think of all those who died in the Holocaust as the loud memorial siren drowned out the Arabic music. I was trying to force myself to feel the pain that my own people, the Jewish people, had endured.

Then the siren stopped. Salima continued singing in Arabic: “My body has become emaciated, my soul has melted and my bones are showing.”

It happens every year on Holocaust Remembrance Day.

As a Mizrahi Israeli, I have always had a complicated relationship with the Holocaust.

Growing up in Israel, I learned about the horrific mass murder of one-third of the Jewish people. Hearing stories from Holocaust survivors, and from my friends whose grandparents survived, was always hard. Each year during Yom Hashoah, the shops in Israel close early, they show Holocaust movies on television and a siren commands the attention of all Israelis, compelling us to stop for a minute of silence and remember what happened to us.

But growing up, I did not understand why.

When I asked my Iraqi grandmother why the Holocaust is significant to us, she answered, “It is a horrible thing that happened to the Ashkenazim,” and that we are one family; we are all Jews.

I could understand that the Jewish people were all one family. But I couldn’t understand what this tragedy meant for me, a young Mizrahi Jew with no real connection to the Jews of Europe.

When I asked my grandmother if our family was oppressed by the Nazis, she said, “No. But if Hitler could have, he would have killed us, too.”

But the Jews of Iraq did suffer in part because of Hitler. In 1941, the government of Iraq was officially Nazi aligned and carried out actions in cooperation with the Germans. My grandmother had told me about how hard life was for the Jews of Iraq and about the Farhud, the two days of pogroms against the Jewish community in Iraq in 1942, and about how they were expelled from Iraq. But she didn’t realize this connection.

When she told me about these hardships, she concluded with “it was not a Holocaust.”

Perhaps that is why I had such trouble understanding how my people’s history fit into Israel’s history and collective memory, and why I had such a complicated relationship with the Holocaust.

The Jewish community in Europe endured horrific violence; 6 million Jews were murdered. There is no denying how terrible it was and how much grief and suffering they experienced.

When these survivors and refugees arrived in Israel, they wanted to grow out of that darkness but still remember what happened to them. The biggest Holocaust museum in the world, Yad Vashem, documented everything that happened to the Jews of Europe in a professional yet emotional way.

I remember visiting Yad Vashem as a teenager and looking for the story of the Iraqi Jews, but I could not find it. The history that I had consisted only of the stories that my grandmother told me.

The persecution and suffering of Mizrahim, never mind the expulsion of 850,00 Mizrahim from the Arab countries of their birth after the creation of Israel, is never recognized with the wail of a siren.

During my visit, I did find a small part of Yad Vashem dedicated to North African Jews, noting that 50 Tunisian Jews were killed during the Holocaust. At the time I glossed over it.

But since then I’ve learned that for parts of 1942 and 1943, Tunisia was under direct Nazi rule. Some 5,000 Tunisian Jewish men, including my grandfather, were conscripted to almost 40 detention camps and forced labor areas. Conditions in the camps were horrific. Even after being worn down by the Allied forces, German authorities continued to persecute the Tunisian Jews.

I am in pain for the 6 million Jews who were brutally murdered by Nazis and their collaborators. A third of the whole Jewish people was erased. But growing up, being told to feel and connect to this collective trauma that I never felt fully connected to was almost impossible.

Until recently, the traumas of the Mizrahi community were never acknowledged fully and dismissed as irrelevant. The stories of North African Jews in the Holocaust were never fully told or acknowledged. Mizrahim were not allowed to truly connect to the Holocaust, an Ashkenazi experience that we were not supposed to be a part of.

I hope that one day Mizrahi children in Israel and around the world will learn about our trauma and what happened to our community during the Holocaust. That they will find a place to deal with our tragic memory of our community and our history. I hope they are taught about the Vichy regime in North Africa, the Nazi-led Free Arabian Legions and how the long arm of the Third Reich reached the Middle East.

But I also hope that they are taught about the Farhud, the ethnic cleansing of Jews from Arab and North African countries and the suffering they have endured.

Learning these stories will not diminish the memory of the Holocaust. It is only when Mizrahim are invited to fully be a part of the communal mourning, and only when we are heard, that all Jews will be able to truly mourn together.