Germany is accused of downplaying anti-Semitic attacks by Muslims 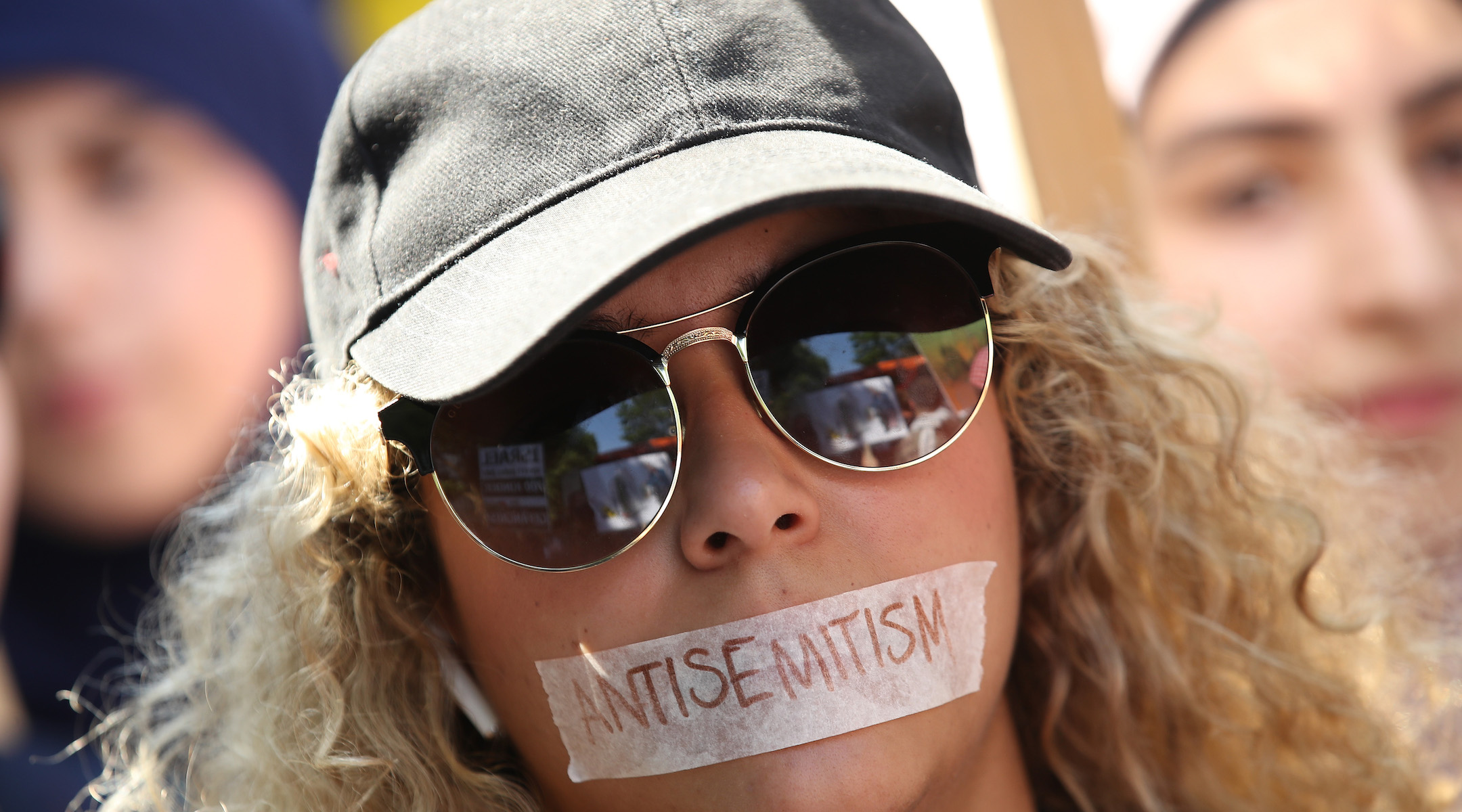 A pro-Palestinian protester at the annual al-Quds Day demonstration in Berlin, June 9, 2018. German officials have been accused of muddling their anti-Semitism statistics by labeling all anti-Semitic incidents as carried out by the far right. (Sean Gallup/Getty Images)
Advertisement

(JTA) — The annual al-Quds Day march in Berlin is often cited as a prime example of the rise of so-called new anti-Semitism in Europe: hatred of Jews in connection with Israel, often by people from Muslim societies.

Despite attempts by organizers in recent years to suppress some expressions of anti-Semitism, the march by hundreds of participants features frequent calls about killing Israelis, Zionist conspiracies and chants of “free Palestine from the river to the sea.” Flags of terrorist groups like Hamas and Hezbollah are on display, and imams regularly preach anti-Semitic verses from the Quran to the crowd in Farsi and Arabic.

“Under the guise of ‘Israel criticism,’ they use classic anti-Semitic stereotypes, identifying Israel as having ‘Jewish characteristics’: ‘domineering,’ ‘greedy’ or a ‘child killer,'” sociologist Imke Kummer observed about the marchers.

(Iran launched al-Quds Day in 1979 to express support for the Palestinians and oppose Zionism and Israel, and international events of support have followed. Al-Quds is the Arabic name for Jerusalem.)

Such agitation is seen worldwide. To many, it’s especially troubling on streets where the persecution of Jews by the Nazis and their collaborators was so brutal that it moved whole societies in Europe to vow “Never again.”

Curiously, however, some of the incidents documented at the Quds Day march in Berlin have been classified by authorities as forms of far-right anti-Semitism, independent watchdog groups have discovered.

Critics say the march example and other mislabeled incidents are facilitating attempts to politicize anti-Semitism and complicating the apparently losing battle to solve it.

“It means we can’t really use the official statistics on anti-Semitism in Germany,” Daniel Poensgen, a researcher at the Department for Research and Information on Anti-Semitism, or RIAS, told the Jewish Telegraphic Agency.

Germany’s Interior Ministry did not respond to JTA’s request for comment.

Doubts about the ministry’s methodology have become more pronounced as its data have increasingly diverged with information from across Western Europe — and from the perceptions of German Jews themselves.

Last month, Interior Minister Horst Seehofer said that supporters of far-right groups were responsible for about 90 percent of the 1,800 recorded anti-Semitic incidents recorded in Germany in 2018, a 20 percent increase over the previous year.

In France, by contrast, more than half of anti-Semitism incidents, and virtually all the violent ones, are perpetrated by immigrants from Muslim countries or their descendants, according to the National Bureau of Vigilance Against Anti-Semitism.

In Britain, the Community Security Trust suggests that far-right perpetrators are responsible for 50-60 percent of the incidents where victims offered a physical description of their attackers. This happened in about 30 percent of 1,652 cases in 2018, a 19 percent hike from the previous year.

In the Netherlands, the previous director of CIDI, the country’s foremost watchdog on anti-Semitism, said that Muslims and Arabs are responsible for about 70 percent of all cases recorded in any given year.

In a 2016 survey of hundreds of German Jews who had experienced anti-Semitic incidents, 41 percent said the perpetrator was “someone with a Muslim extremist view” and another 16 percent said it was someone from the far left. Only 20 percent identified their aggressors as belonging to the far-right.

“There is clearly a mismatch here, and it speaks to the inaccuracy of the German official statistics,” the RIAS researcher Poensgen said.

Poensgen said his watchdog organization has talked to officials about the statistics problem.

“There was interest in our criticism, it was listened to and studied, but till now [there’s] severe reluctance on the federal level to change their category system,” Poensgen said.

Confidence in German authorities was undermined in 2014 when a German court ruled that anti-Semitism was not behind the attempt by three Palestinians to set fire to a synagogue in the city of Wuppertal. (A higher court affirmed the ruling  in 2017.)

To some critics, there is a political dimension to the apparent reluctance of German authorities to blame anti-Semitism on Muslim immigrants. Surveys suggest that group is considerably more anti-Semitic than non-immigrants, or at least more open about it.

But “the new Muslim anti-Semitism is taboo, as addressing it would only strengthen opponents of immigration,” Krisztina Koenen, a journalist for Frankfurter Allgemeine Zeitung and der Welt, wrote in an analysis she published in March in the Hungarian-Jewish magazine Neokohn.

The government of German Chancellor Angela Merkel has faced considerable criticism, including that she is importing anti-Semitism, over her decision to let in more than 2 million immigrants from Syria and the Middle East since 2015. 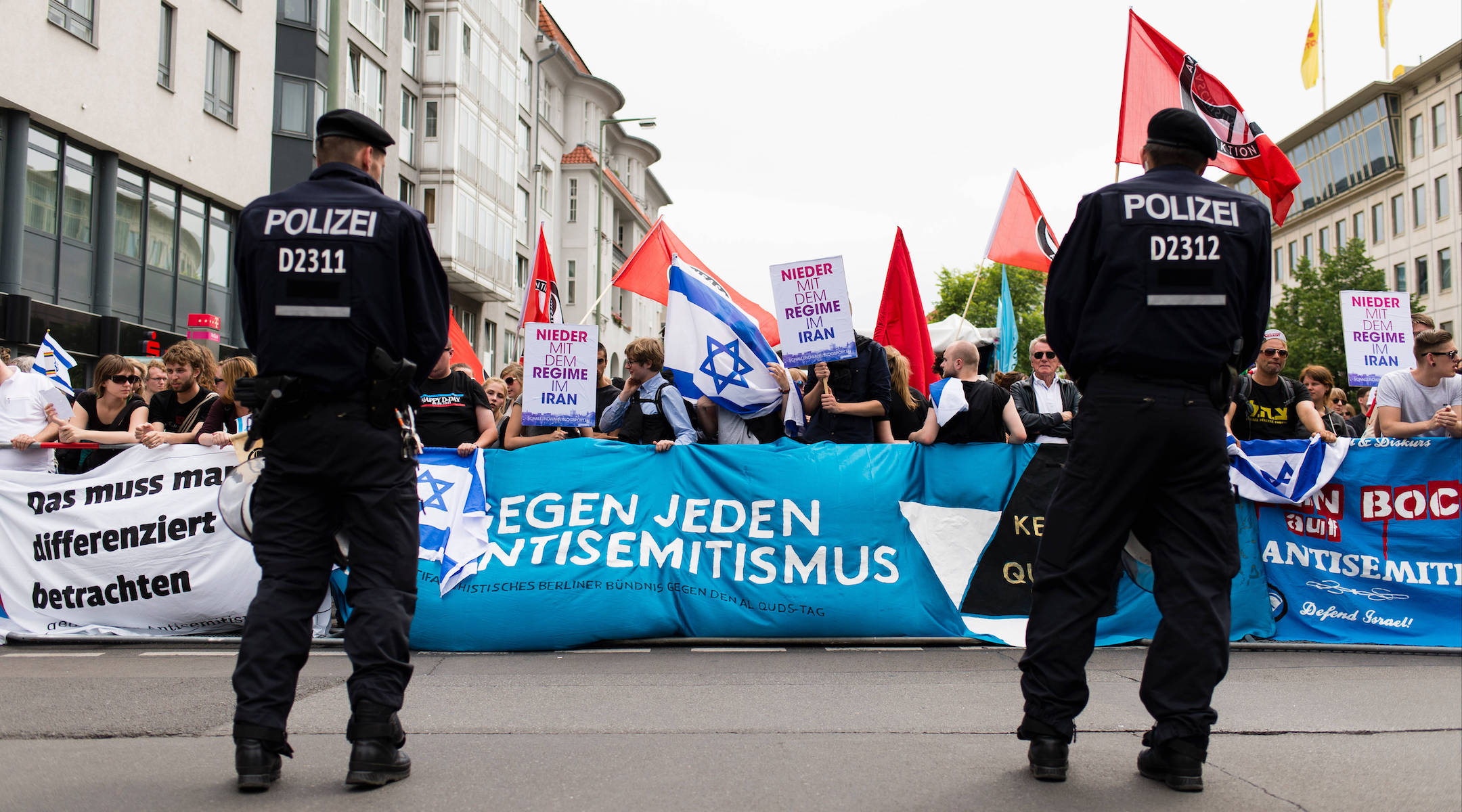 Demonstrators carry a banner that reads “Against any kind of anti-Semitism” during a rally against the annual al-Quds Day march in Berlin, July 11, 2015. Anti-Israel rallies are held annually on the day. (Gregor Fischer/picture alliance via Getty Images)

Last year, a German federal entity went to some pains to refute the claim about importing anti-Semitism. The study by the Berlin-based EVZ foundation claims that there is no connection between anti-Semitism and immigration, despite claims by some Jews to the contrary.

The conclusion prompted scathing criticism by Rabbi Andrew Baker, director of international affairs for the American Jewish Committee and the point man on anti-Semitism of the OSCE intergovernmental organization. He said the report’s authors “ignore the data, dismiss the problem, and blame the victims.”

Poensgen doubted that official German statistics are being deliberately mislabeled for political purposes.

“Most likely it’s the result of an out-of-date classification system, that for historical reasons is designed to monitor far-right anti-Semitism,” he said.

He cited one case in 2014 in which about 20 men shouted the Nazi slogan “Sieg heil” at an al-Quds Day march, an annual pro-Palestinian event where the mostly Muslim participants typically chant anti-Israel and anti-American slogans. The episode appears as a far-right incident in the Interior Ministry’s records.

Such mislabeling does, however, help the German far-right’s attempt to discredit the government, Poensgen said.

RIAS uses a more nuanced classification system than the government’s, he said. Last year, it indicated that the far-right was responsible for about 18 percent of anti-Semitic hate crimes where perpetrators could be affiliated with a population group or ideology. Islamists and anti-Israel activists accounted for about 11 percent of 1,083 cases last year in Berlin (RIAS limited its 2018 monitor report to that city). Other perpetrator categories included conspiracy theorists, the far left and centrists.

The political affiliation of about half of the cases were classified as unknown.

German authorities have made attempts to address Muslim anti-Semitism specifically. The top intelligence agency in Germany recently published a 40-page analysis of rising anti-Semitism by Islamist extremists that was welcomed by Jewish leaders.

But the government’s system for classifying anti-Semitic incidents is flawed, said Laszlo Bernat Veszpremy, who has researched anti-Semitism among recent immigrants to Europe in a paper published by the Budapest Migration Research Institute.

It has five categories: right-wing, left-wing, foreign ideology, religious ideology and unknown, which is rarely used.

“The problem is that Islam is not mentioned anywhere, so Islamist or ‘pro-Palestine’ attacks, which could motivate Muslim or Arab perpetrators, can go in at least three categories: right-wing (nationalist), foreign (secular) or religious,” Veszpremy told JTA.

“The de facto situation is that pretty much any anti-Semitic incident in Germany is automatically attributed to the far right because of how the classification system works.”

In France and Belgium, authorities are frequently accused of downplaying or sugarcoating left-wing and immigrant anti-Semitism.

“Today I no longer have full confidence that anti-Semitic hate crimes in France are handled properly,” Sammy Ghozlan, a former police commissioner and founder of France’s National Bureau for Vigilance Against Anti-Semitism, or BNVCA, recently told JTA. He cited a series of perceived failures in the murder trial of a Muslim man who killed his Jewish neighbor while shouting about Allah and calling her a demon.

The judge presiding over the case recently reopened the issue of the defendant’s sanity — on her own initiative — after he was found fit to stand trial in psychiatric evaluations following his arrest. Critics charge that the court appeared reluctant to say the attack was motivated by anti-Jewish animus.

In its annual report for 2016, the French National Consultative Commission on Human Rights, a government watchdog, wrote that a “significant part of the anti-Semitic acts (actions and threats) pertains to neo-Nazi ideology, whereas in most other cases the perpetrators’ motivations are difficult to ascertain.”

It did not mention attacks by Muslims, who BNVCA says are responsible for nearly all violent anti-Semitic incidents in France.

The report also questions the very existence of a “new anti-Semitism” generated by critics of Israel, saying that if this new anti-Semitism exists, “then it pertains to a minority” of the cases.

In Belgium, the lawyer for the country’s federal watchdog against racism, UNIA, in 2017 protested the hate speech conviction of a Palestinian man who shouted about killing Jews at an anti-Israel demonstration even though UNIA was among the initiators of his trial. The conviction was “distorted justice instead of true justice,” the UNIA lawyer wrote.

Joel Rubinfeld, president of the Belgian League Against Anti-Semitism, said the case showed that UNIA was “part of the problem, not the solution, of anti-Semitism.” The Flemish Forum of Jewish Organizations said in 2017 that it has “lost all confidence” in UNIA.

Belgian prosecutors recently dismissed a criminal complaint filed against a Turkish cafe owner who in 2014 placed a sign on his business saying dogs are welcome at his business near Liege, “but Jews are not.”

The prosecutor’s office explained its decision not to prosecute the cafe owner by saying he had promised to write a letter apologizing to the Jewish community. The letter has yet to be seen.

In reaction, Rubinfeld invoked one of Belgium’s best-known surrealist painters.

“This,” he said, “is something out of the world of Rene Magritte.”