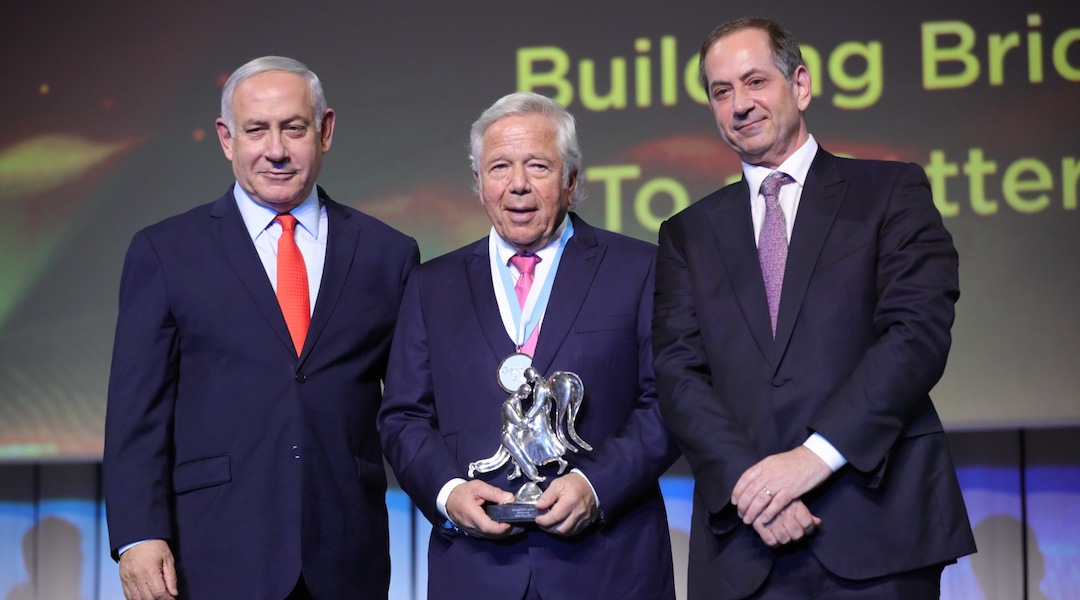 JERUSALEM (JTA) — New England Patriots owner Robert Kraft announced the establishment of a foundation dedicated to combating anti-Semitism as he accepted the Genesis Prize award in Jerusalem on Thursday.

In addition to the $1 million he received along with the prize, Kraft is putting $20 million of his own money toward the project, to be called the Foundation for Social Media Messaging Against Anti-Semitism. It is also receiving funding through two $5 million gifts, one of which was pledged by Roman Abramovich, owner of the Chelsea soccer team.

“The new foundation I am announcing tonight is a platform to galvanize the global fight against anti-Semitism, uniting all people of good conscience around this goal,” Kraft said. “My vision is to work to end the violence against Jewish communities, to counter the normalization of anti-Semitic narratives that question Israel’s right to exist disguised as part of legitimate debate on campuses and in the media.”

Kraft, 78, said his goal is to raise $50 million for the foundation, which will target those aged 18 to 35. That group of young people, he said, are the “most impacted by what they see on social media.”

“In combating the scourge of anti-Semitism, my solemn ambition is to counter all forms of intolerance in the spirit of the ancient Jewish value of tikkun olam – to heal and repair the world,” he said.

Some 600 people, including Israeli Prime Minister Benjamin Netanyahu and 15 past and present Patriots players and their spouses, attended the ceremony at the Jerusalem Theater.

Comedian Martin Short, who served as emcee, skewered Israeli and American politicians as well as last year’s winner, Natalie Portman, who declined to attend the award ceremony. The Israel-born actress said she did not want to appear to endorse Netanyahu, whose policies she disagrees with.

“At least this year’s honoree showed up,” Short said at the beginning of the program. He peered around the packed theater and asked, “If all the rich and powerful Jews are here, who is controlling the media?”

Kraft was expected to be a safer choice as the recipient of what has been called the Jewish Nobel. In February, however, the billionaire businessman and philanthropist was accused of soliciting a prostitute at a massage parlor in Florida. He is fighting the charges, and the Genesis board decided to stand behind him, although one advisory member resigned over the scandal.

Short didn’t mention the case, which is ongoing.

When the prize was announced in January, Kraft said he would donate the $1 million prize “to initiatives combating anti-Semitism and other forms of prejudice, as well as attempts to delegitimize the State of Israel.” He was chosen as the recipient two months after the attack on the Tree of Life synagogue building in Pittsburgh by an anti-Semitic gunman that left 11 worshippers dead.

The parents and sisters of two of the victims, brothers Cecil and David Rosenthal, visited Israel this week as guests of the Genesis Prize Foundation and attended the ceremony, where they were recognized.

“I am delighted to welcome Robert Kraft to the august family of Genesis Prize laureates,” Netanyahu said at the ceremony. “This prestigious award honors Robert’s generous lifelong philanthropy, his commitment to the Jewish people and his love for Israel. It also recognizes his principled stand against anti-Semitism and efforts by our enemies to undermine the State of Israel through BDS and other similar campaigns. Israel does not have a more loyal friend than Robert Kraft.”

Kraft has visited Israel over 100 times since his honeymoon in 1963 with his late wife, Myra, who was remembered several times during the evening. He said he has been on 27 missions to Israel in recent years with Jews and non-Jews, and “loves seeing people’s reactions when they see Israel for the first time.”

The award, started in 2013, is financed through a permanent endowment of $100 million established by the Genesis Prize Foundation, which is headquartered in New York and Tel Aviv.